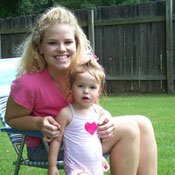 Kristin Hockman and her daughter Miriam, who has celiac disease, eat gluten-free foods.

Kristin Hockman just knew something was wrong with her infant daughter, Miriam.

"She was spitting up all the time," she said. "She wouldn't sleep; she cried all the time. As a mother, I just knew something wasn't right."

Hockman took her daughter to her pediatrician, but he couldn't figure out what was going on. Eventually, Miriam was diagnosed with celiac disease, an autoimmune intestinal disorder that restricts the small intestine from ingesting gluten.

When Hockman first learned her daughter had celiac, it was "hard and complicated." "I had heard of it before," Hockman said. "Someone in my family had it. Actually, I asked my pediatrician if Miriam might have it, and he referred me to a specialist for more tests."

If people with celiac disease eat gluten, their immune system turns against itself and damages the fingerlike villi of the small intestine. When the villi become damaged, the body cannot absorb nutrients, which leads to malnourishment.

Celiac affects all kinds of peopleyoung, old, male and femaleand occurs 1 in 133 people, but 97 percent remain undiagnosed, according to information from the National Foundation for Celiac Awareness. That means that almost 3 million Americans could have celiac disease and only 100,000 have been diagnosed.

Miriam is now 2 years old, and things are easiersomewhat.

"As long as we are at home, it's easy," Hockman said. "I feel safe. But even when we go to my in-laws' house or to church, it's challenging."

Hockman often leaves detailed lists for family members or babysitters, and she always has to make sure that people understand gluten is not just in food; it can be in other products such as soap or toothpaste.

"Miriam can't play with Play Doh because it's made with wheat flour," she said. "It's hard, because people just don't understand sometimes. They have the best intentions, but they just don't know."

Hockman added that her family doesn't eat out much since Miriam's diagnosis. To make things easier, she and her husband eat gluten-free along with Miriam. Hockman herself has gluten intoleranceher blood test came back positive.

Currently, the only cure for celiac is a totally gluten-free diet. That means avoiding all products that contain wheat, rye and barley or any of their derivatives. For those who don't know about celiac disease, not eating gluten might seem simple. However, because most processed foods contain some source of gluten, going gluten-free can be frustrating and overwhelming. Gluten is found in wheat, barley and rye, and most prepackaged food has at least one of those elements.

Getting tested for celiac might be easier in the near future. Vanessa Maltin, director of programming and communications at the National Foundation for Celiac Awareness, says a home test is currently available in Canada.

"The FDA is considering approving it for use here in the United States," Maltin said, adding that a new medicine is being researched. The medicine wouldn't cure celiac, but would help the body cope in cases of cross-contamination.

In 2006, the FDA passed the Food Allergen Labeling and Consumer Protection Act that required manufacturers to list possible allergens on their food labels.

"Unfortunately, the eight allergens they are required to disclose don't include gluten," Maltin said. She recommends that people call manufacturers to ask if specific products have gluten.

Some grocery-store brands will have "gluten-free" on their labels if the product does not contain gluten. But for the most part, the best place to buy gluten-free foods is at a health-food store like Rainbow Whole Foods Coop.

A University of Maryland Center for Celiac Disease study found that people diagnosed with celiac will not "outgrow" the disease. It's not a food allergy, but an autoimmune disease, like diabetes or rheumatoid arthritis. So, that means in addition to the work involved in maintaining a gluten-free lifestyle, for people like Hockman, there is the reality that this disease will never just "go away."

Hockman said finally finding out what was wrong with her daughter gave her peace, even though it's still difficult to live gluten-free.

"I would encourage other moms out there to really research this disease," she said. "I think there are probably many children out there who have it, but many doctors don't even consider it. You have to go out and research it for yourself."

• Stephanie O'Dea is another mother living and cooking gluten-free. Check out her blog http://crockpot365.blogspot.com for gluten-free recipes and advice.

In 2006, the FDA passed the Food Allergen Labeling and Consumer Protection Act that required manufacturers to list possible allergens on their food labels. “Unfortunately, the eight allergens they are required to disclose don’t include gluten,” Maltin said. Since 1 in 133 people have celiac disease, gluten should be added to the list.