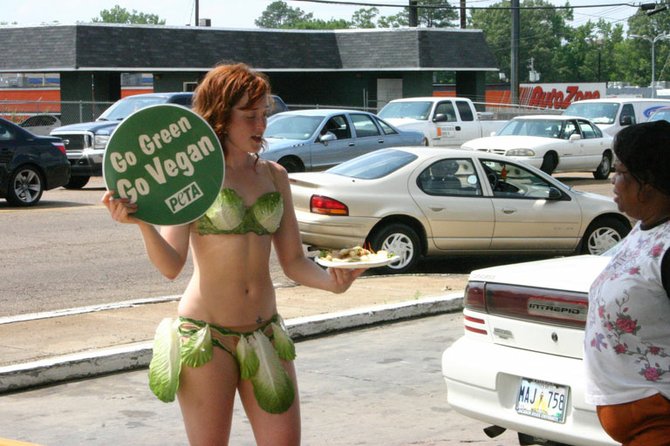 It's not surprising that 100 people would flock to the sight of two women wearing nothing but lettuce bikinis. But last Wednesday, May 28, it seemed that the majority of the people who gathered at a Shell station on Highway 80 at 3 p.m. were there for the two gallons of free gas the Lettuce Ladies were offering.

Affiliated with People for the Ethical Treatment of Animals, the group began when actress Elizabeth Berkley, of "Saved by the Bell" fame, sent out postcards of herself wearing only lettuce to promote vegetarianism. Since then, PETA has formed the Lettuce Ladies, an army of young women who outfit themselves in lettuce bikinis in order to urge meat-eaters to go vegetarian.

"PETA's Lettuce Ladies started doing this promotion to encourage people to recognize the correlation between eating meat and its devastating effects on the environment," Lettuce Lady Nicole Matthews said at Wednesday's event.

Matthews, who has worked for PETA for two years, said that many people's response to the growing environmental crisis is to run out and purchase new energy-efficient products instead of making small lifestyle changes.

"There's so much talk right now about switching to a hybrid car or changing your lightbulbs," she said. "We're encouraging people to just switch up what they put in their grocery baskets instead and choose vegan and leave meat off their plates."

In addition to free gas, the Ladies also handed out tofurkey sandwiches in an attempt to underscore those connections as people lined up to get gas.

"I think people are really surprised to find out that eating meat actually causes more carbon emissions than driving a car," Matthews said. "The lettuce bikinis are just a fun way to draw attention to how vegetarianism is good for one's health."

Since its inception in 1980, PETA's main goal has been the defense of animal rights. But the concern over the global-warming crisis has allowed the organization to combine the solutions to two problems into one.

"It's obviously better for the animals," Matthews said of going vegan, "and it's a great way to make a positive effect on the environment as well.