‘We Back Laughing’: RaDeazy Herrin Drive Brings Comedy to Picayune 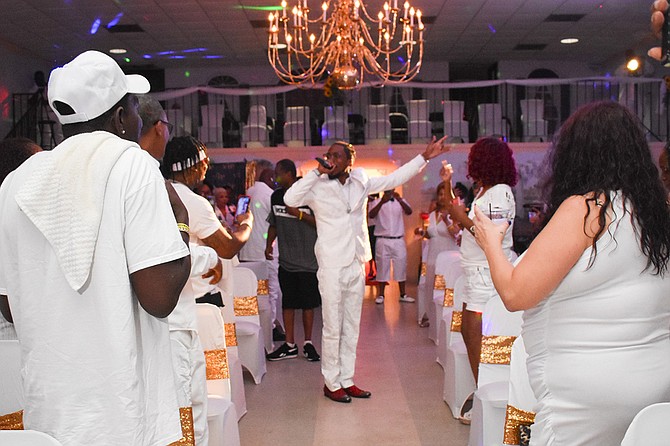 Editor's Note: This story has been edited to account for events that have occurred since this article's original publication at the Mississippi Free Press.

Radale Brumfield, better known to most by his stage name RaDeazy Herrin Drive, steps through the back door of the auditorium. The lights dim as he begins dancing down the aisle, pausing to hug a fan and to high-five another. As he reaches the stage, he performs a few steps of the electric slide before turning to the band and cuing them to cut the music.

Moments later, the hip-hop artist introduces himself, the show and the opening performer—all while using his role as host to keep the audience engaged, which he describes as key for any show.

“I bring the energy,” Brumfield said. “When I come in, I make sure that even if you don’t want to stand up. You are going to stand up. It’s funny, and it’s all fun.”

“RaDeazy” brought laughter to the stage again on Saturday, Jan. 15, with the “We Back Laughing New Year’s Comedy Show” at The Grand Theatre (217 S. Curran Ave.) in Picayune. The show was the first that Brumfield’s company, Herrin Drive Entertainment, has put on since October 2021, when the artist and promoter opted to take some time off from organizing events to strategize and leave his fans wanting more.

“I called it the ‘We Back Laughing New Year’s Comedy Show’ because it’s been (since) Oct. 16 (that) we had one,” he said in an interview prior to the event. “I think the timing is perfect because New Year’s opened with a lot of drastic things that happened, and people are going to be looking for this laugh. People are going to need this laugh.”

“These particular comedians on this roster are ones that have performed in my other shows over the six years,” Brumfield said. “I went back and selected ones that I knew were going to open the new year right.”

Robinson, the show’s headliner, has been a full-time comedian for nine years. Saturday was his third show with HDE. He says he returns each time because of the professionalism that both the show and its organizer exhibit.

“RaDeazy puts on a great comedy show,” Robinson said. “The crowd is great, and they receive me well. I have fun every time.”

The Miami native’s set focuses on real-life scenarios that borrow from romantic and familial relationships.

“You are going to have an exciting time,” he said. “I don’t just tell jokes. I am an entertainer, and I make sure everyone in the room has a great time with me. I’m going to bring you into my world for 45 minutes to an hour and make you see some things that you haven’t thought about.”

Brumfield first came up with the idea of hosting comedy shows himself after another organizer invited him to host one in Jackson, Miss., in 2015. The recording artist had never attended a comedy show beforehand, but as he sang from his musical catalog, he realized that the atmosphere felt quite different from the concerts that he had been presenting.

“The guests were sitting down actually watching. When you perform at a club, everyone is walking around, talking, going to the bar, or on the phone,” he recalls. “At the comedy show the love was different. Everyone had a chance to sit down, and they just listened.”

Inspired, Brumfield spent the next year traveling to comedy shows, listening to different artists and recruiting a roster of talent, culminating in his first show, “The Experience,” in June 2016.

“That one performance was a life-changer for me. My dream always was to bring the lights to Picayune,” he says. “It was just about trying something, and ‘The Experience’ led to 40 more shows.”

In the nearly six years since “The Experience,” HDE’s shows have increased in popularity, with artists and comedians approaching the company rather than the other way around, which has opened the doors for bigger and more impressive events in areas like Hattiesburg, Miss.; Slidell, La.; Jackson, Miss.; and along the Mississippi Gulf Coast.

However, HDE continues to host the majority of its shows in Brumfield’s hometown of Picayune, bringing artists from Texas, Alabama, South Carolina and California to the small Mississippi town.

“I want to make Picayune the new Hollywood,” he says. “I don’t have to go anywhere else to make a name for myself. I’m going to have great shows right here (at home). I’m going to stay consistent and stay in Picayune.”

“We Back Laughing,” which marks HDE’s 42nd show, also took place in Picayune, adding to Brumfield’s goal of making Picayune a more prevalent location for talent to perform.

Brumfield grew up on Picayune’s Herrin Drive, a name he incorporated into his public persona as RaDeazy and into his entertainment company. His grandmother founded a gospel-music group with her 11 children called the Brumfield Gospel Singers. The group traveled across Mississippi to sing in churches and gospel programs, and they often held practices at Brumfield’s home, which he shared with his mother, father and four sisters.

“Growing up with a spiritual background is what makes me humble today,” he said. “The Lord has been blessing me through the journey to just meet people through laughter. I’ve met thousands of people.”

These years both introduced Brumfield to the music scene and taught him that entertainment carries power and can be a necessity.

“I feel like laughter can save lives,” he said. “I meet people after the comedy show who say, ‘Aww man. I was going through something, and I needed this laugh.’ Those comments right there are why I’m still doing it.”

To find more information on Herrin Drive Entertainment and upcoming shows, visit HDE.life. Videos of past shows can be found on RaDeazy Herrin Drive’s YouTube channel. Follow RaDeazy to keep up with his musical career or HDE’s upcoming shows on Facebook, Instagram and Twitter.