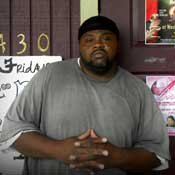 Larry Jackson started his own promotion company and hosts a weekly comedy act.

When I shook his hand, I knew instantly that Larry Jackson wasn't a full-time comedian. His enormous paw, covered with callouses and cuts, swallowed my hand. In fact, he's only a comedian on the side. He maintains bridges and drains for the city of Jackson at his day job.

We were a funny looking twosome, walking into Ole Tavern on George Street for an interview. Larry is a colossal individual: 6-foot-plus, 300-pounds-plus. Me, I'm scraping 5-foot-10 at about one-third his weight.

We found a mutual respect, though, as two people pursuing their respective moonlight-crafts that have proved to be less-than-lucrative. Comedy is what Jackson, 37, earnestly calls his labor of love: comedy.

Born and raised in the capital city, Jackson has been doing stand-up comedy around the south for more than three years. He says he gets material, like most comedians, from things he sees around him every day. We chuckle when he says this, acknowledging that Jackson provides a lot of material.

"My family owns a laundromat," Jackson says. The laundromat is his third job, usually on the weekends only. "I see mommas backhanding their kids, old men trying to mack on young girls. You never know what you'll see."

Jackson has a sense of true dedication when he talks about comedy. He performs weekly, usually at the West Lounge on Capitol Street, but his role has changed to more of a host than a headliner. He likes to incubate new talent, he says, saving only a few minutes for his own bits.

"When I first started doing comedy in Jackson, it was a grind," he says.

Every week was another amateur night, but the club usually put him on around 1 a.m., right between a folk band and a death-metal band.

So he went independent in 2010, starting a promotion company, Fat Boy Entertainment. Now his crew of about 10 comedians has gained a little momentum. They've performed on the Gulf Coast, Shreveport, La., and even at the famous Comedy Store in Los Angeles.
He speaks in a casually philosophic way about his comedy, about how laughing holds a special power over people and how the stage is akin to an artist's canvas.

Comedy is an art form unlike most, though. The response is instant: either your jokes kill or you bomb. It's a challenge Jackson gladly accepts.

"If I get a heckler saying, 'Get off the stage, Fat Boy,' I just make it make it a personal challenge to make that person laugh," Jackson says.

Jackson's sets can be racy and profane, something probably attributed to his comedic influences: Richard Pryor, Eddie Murphy, George Carlin and Rob Klein.

Also, he no longer invites his girlfriend to the show.

"I made a joke about my girl's dad. Man, I didn't get none for like two weeks," he said. "She can't come anymore."

He isn't satisfied with the modest success he's achieved. "You gotta stay hungry," he says.

Jackson prepares for gigs in his living room, alone with a microphone, practicing everything from his delivery to his hand motions and even his wardrobe. "I tried to wear a preppy three-piece suit, but I ended up looking like a fat dude going to church," he says. "I just rock jeans and a T-shirt now."

Asked if he was nervous the first time he ever performed stand-up on stage, Jackson thinks for a moment.

"To be honest, I was plastered," he says. "I was comfortable once I had a few drinks in me."

Our conversation devolves, or maybe evolves, from talking about comedy, to just talking. Jackson shows me some videos on his phone of him and his friends playing drinking games. He illustrates how to make a bottled-beer freeze instantly just by tapping the bottle on the table, something I'd only seen on YouTube. I'm impressed.

Like any good promoter, Jackson hypes his gigs, reminding me about his performances at West Lounge as I get ready to leave. He's in this game for laughs, not money, so I think I might just go.

Glad to hear this. Good luck to the comedians. Comedy is my favorite entertaiment. I may go by and see how my old act holds up. Laughter is good for the body and soul.