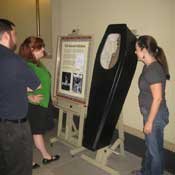 The Mummy is part of Jackson lore.

Picture this: An intrepid medical student from a local university gets permission to examine the most prized artifact in the state's history museum­: a centuries-old Egyptian mummy. The student, simply taking part in an adventurous exercise to further his medical studies, makes a startling discovery that shocks the city and the antiquities community.

Was the mummy that of an important Egyptian ruler? Nope.

Was the mummy adorned in valuable jewels and gold? Nope.

Was the mummy a total fake, filled with everyday items like nails and newspaper? Yep.

In the 1920s, someone donated a purportedly authentic mummy to the Mississippi Department of Archives and History. For years, it was the most popular exhibit at the new Capitol building, where state officials displayed artifacts before the Old Capitol Museum opened in the 1960s.

"I've had people tell me stories about how they used to go visit the mummy every Sunday after church," said Clay Williams, director of the Old Capitol Museum, adding that it was a key display in Jackson during the 1930s, 1940s and 1950s.

Then, in 1967, a University of Mississippi Medical Center student X-rayed the mummy as a research project. That's when the whole thing unraveled.

"Surprisingly, I wasn't surprised," said Dr. Gentry Yeatman, who was the young med student who revealed the mummy as a fraud. "When we turned it over and closely examined the mummy, it was clearly not real. We even saw German-print newspaper shreddings."

Instead of being cast aside as a sham, though, the mummy remains a popular attraction at the Old Capitol Museum. Now every October, the museum resurrects the mummy as a tribute to days gone by when people thought it was something more than a dirty bag of cloth filled with rubbish.

"The 'Dummy Mummy' has a strong connection to the city of Jackson. I think a lot of its appeal is just nostalgia ... nostalgia and curiosity. That's why we pull it out around Halloween and the State Fair," Williams said.

What started off as intriguing as a Dan Brown novel turned out to be as silly as a Brendan Fraser movie.