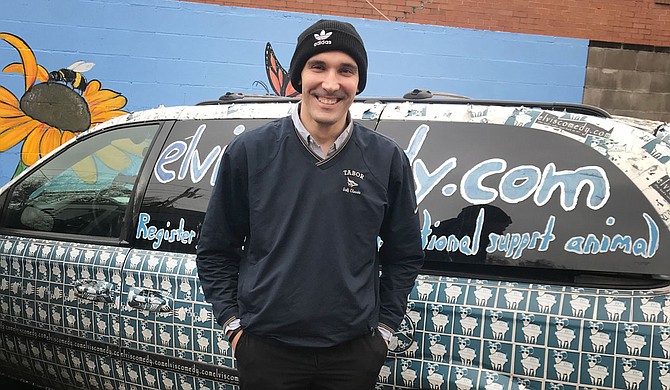 Don't be surprised if you step into a Waffle House and find Elvis Mujic, 30, telling jokes and interacting with everybody like he would in any comedy club. This artist likes to perform in unusual places. Since December 2018, Mujic has been visiting 90 shelters and nursing houses around the country as part of his tour, "Socks & Undies Comedy Show." The purpose of the tour is to collect clothes for the homeless. In fact, an article of clothing—whether it be jackets, socks or even underwear—serves as the price of admission for his shows. His tour has taken him to Jackson, where he provides a means for Jacksonians to give to the homeless community this holiday season.

Mujic was born in Bosnia, then known as Yugoslavia. His parents, who are Muslin, gave him a name that "sounds more American" so that he would not have an especially islamic name during a time that many within Yugoslavia harbored religious intolerance toward people who practice Islam. His family moved to America to start a new life when he was 7 years old, and he grew up in Detroit.

"I came to America with my best friend, a goat named Tina Turner. We are married now and give two goat kids," a smiling Mujic jokingly says.

When asked how he describes his performances, he says, "I am a Bosnian-American stand-up comedian. I say plenty of things I don't actually believe, but they make people laugh. I do improvised performances when I have nothing scheduled."

In his last year of high school, he started reading Aristoteles and other authors who wrote about ethics, metaphysics, logic and physics. Intrigued by these writers' written thoughts, he enrolled at Amherst College in Massachusetts to study philosophy, although he left before finishing his degree.

In 2012, Elvis realized what he really loved was cheering up people.

"I was good at making others laugh, so it felt natural when I decided to become a comedian. I learned by performing in open mics and by listening to podcasts. Then I met "Downtown" Tony Brown, an older Detroit comedian, (and) he became my mentor. Tony didn't have a car, so I drove him to shows. We would perform and he would give me advice afterwards."

His first presentation took place at an open mic in a coffeehouse located in a poor neighborhood of Detroit, with only about seven people in the audience.

"After my performance, (two guys) went up, banged on empty cans and sang songs. It was hilarious," he says, laughing. "I prepared jokes for the first time. One joke I remember was about lying in my journal so that when I read it later, it would look like I lived an extraordinary life."

After this initial experience, Mujic performed more than 100 times in two years in Detroit. When playing to the same crowds grew stale, he began to move around, spending six months in San Francisco, a few months in Portland, Ore., and then another six months in Austin, Texas. Eventually, he decided to travel across the country and perform in random places like nightclubs, comedy clubs, bars, restaurants, coffeehouses, shelters and nursing homes.

The first shelter he visited was in Tupelo, Miss., in 2015. With a tornado warning in the area, Mujic took refuge in a location for The Salvation Army, where he suddenly had the idea to perform in these types of places.

He says his most difficult performance was a time when he told jokes in a state-run nursing home in West Virginia, where patients were sick or medicated.

"Nurses bussed patients in wheelchairs and rolling beds. I tried to do planned jokes, but that didn't go so well. I ended by getting on one knee and asking one of the ladies to marry me. I thought I failed, but when I went around shaking everyone's hand, I found out they simply appreciated something new because they spend most of their day sitting in a room alone."

In the last seven years, the comedian has visited 47 states in his Dodge Caravan minivan. In Jackson, he had prepared performances at Billy Brumfield, Grace House, The Salvation Army and The Rescue Mission. Recommended donations include new socks, underwear, bras, diapers, hygiene products, winter-wear or gently used blankets.

The donated goods will be collected on Sunday, Dec. 22, at noon. Later that evening, Mujic will make a final Jackson performance at Fenian's Pub starting at 8 p.m. before moving to the next spot on his tour.