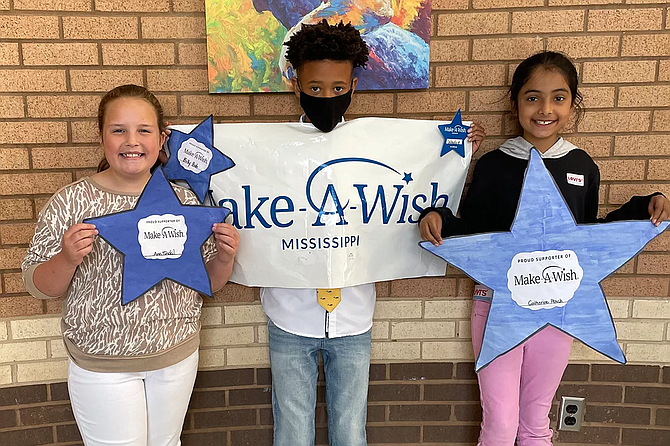 Ariel Hurley, 5, watched with excitement as contractors rebuilt her backyard in Brandon, Miss., into a space where she could play with her brother. Throughout December 2021, the Oakdale Elementary kindergartener observed the workers first turn her family’s decaying deck into a double-level extension to the porch and build a swingset next to it. She can even play outside when it’s raining now.

“I’ve been wishing for a plane, a slide and a pilot thing and a swing, so my mom doesn’t have to take me to the park,” Ariel told the Mississippi Free Press.

The 5-year-old likes to swing high, though her mother Terry Hurley encourages Ariel not to as to avoid injury. Her daughter has an illness that has affected her for much of her life, and this backyard makeover was her wish.

Ariel’s mother applied for Make-A-Wish when her daughter was 2 years old. Ariel got approved right away, the mother said, but COVID-19 made its arrival, delaying the process by two years.

“It took some more time to finally get a contractor who would do it. They started, I’d say, in the first part of December last year, and it was done two days before Christmas,” Hurley told the Mississippi Free Press.

Santa Claus visited Ariel and her friends for a party to celebrate her new backyard with toys in tow.

“We had cake,” Ariel added to her mother’s retelling of the festivities. “(It said) Happy Make-A-Wish to you.”

“It’s nice ’cause it’s off of my den, and I’ve got some big windows across the back,” Hurley said. “I sit here and watch them play, and I don’t have to sit outside if I don’t want to. As soon as we get home from school, she says, ‘Can I go outside?’”

“I say it everyday,” Ariel chimed in.

“They play a lot on it. It’s well-used,” her mother added.

Kids for Wish Kids Coordinator Jane Walsh has worked for the Make-A-Wish Mississippi chapter of the Make-A-Wish Foundation for more than 20 years, helping schools come up with ideas for how to raise money to help grant kids’ wishes.

After hearing about Ariel’s illness, she reached out to Hurley’s mother and asked where her daughter attended school. She then approached Oakdale to see whether they would be interested in having a fundraiser, and administrators jumped at the opportunity to participate, Walsh said.

“Usually when I’m starting to contact schools each school year, I start with schools that have a wish child that attends that school because that makes the school more interested in helping us,” she told the Mississippi Free Press.”

Hurley said she encouraged the fundraiser because she knew it would benefit other children, not just Ariel.

“Ms. Payne, our principal, called me in. … She said, this looks like something your Venture students could do as a service-learning project. So I jumped on it and said yes,” Elizabeth Woods, a teacher at Oakdale Elementary, told the Mississippi Free Press.

“I think Elizabeth did a great job in getting the word out,” Walsh said. “We sent home fliers that had Ariel’s picture on them, so people knew that it was an organization that helps children right here among us.”

“We had a little competition that the class that contributes the most money will get a popcorn party. I’m kind of pushing for a pizza party for that class though, but it was Ariel’s class who collected the most money,” Woods said.

Northshore Elementary School, another school in Brandon, similarly held a fundraiser in honor of Ariel from Nov. 29 to Dec. 17. During the first week, the school sold stars; during the second week, students brought in coins for a change-collection effort; and during the third week, students sold candy canes before beginning winter break. Altogether, Northshore raised $7,482.

Make-A-Wish sent Oakdale small paper stars that the school could sell for a minimum of $1. Those who donated would have their name or child’s name written across the star. Faculty then placed the stars on display along the school’s entrance. The Oakdale student body also participated by making their own stars to sell for the fundraiser.

“We created two types of stars,” Tavleen Kaur, a fourth grader in the Venture program, told the Mississippi Free Press. “(The) first one was construction-paper ones. The second ones were where we painted them, and then we also cut them out. And then we also had one where we got them sent, and they were (made) by Make-A-Wish.”

“If you donated money, $1 or more, I think on Friday you got to wear any hat you wanted,” Marco Harris, an Oakdale fifth grader, said.

This arrangement was known as Wishing and Wearing Hats, an event that took place every Friday throughout the month of February, Woods said. The fundraiser began on Jan. 31 and ended Feb. 28, 2022, the teacher said.

“At first, it hurts to part with my money, but I feel good after,” Harris, whom Woods warmly referred to as the class clown, joked.

Woods said that the students spread word of the fundraiser and that the school advertised the campaign on Facebook. Teachers also sent out newsletters. Parents and grandparents donated, many purchasing the $100 stars.

Moore described giving back as a good experience, but she said that she wishes the fundraiser would have lasted longer because it felt too short. The fourth grader would like to do more projects where she’s able to give back to the community, she said.

“I would like to get blankets, like raise money to buy blankets and dog food. Maybe help with the animals, comfort them and maybe help some of them get adopted. I think that would be really fun,” Moore said.

Studies regularly show that involving children in helping others and early philanthropy has a multitude of benefits for them and makes them more prone to giving to help others later. Colin and Alma Powell’s America’s Promise Alliance included providing opportunities to help others” to young people as one of five major promises to help them thrive. “The chance to give back teaches young people the value of service to others, the meaning of community, and the self-respect that comes from knowing that one has a contribution to make in the world,” the America’s Promise site says of Step 5.

And there are many ways to tailor early-giving to different age groups and advice for parents on how to be most effective doing it.

Naur called the experience fun and said she enjoys giving back to the community as well. “And just in general, it feels good seeing people smile when we give back to them,” Naur added.

Jane Walsh said hope, strength and joy are attributes that Make-A-Wish wants to provide to those who are suffering from life-threatening conditions. Doctors tell the foundation all the time what a big difference granting a wish makes in a child’s recovery, she said.

“They may not be able to get it for a long time because of their illness. They may not be able physically to go on a trip or go meet a famous person,” the coordinator said. “But if they know they have it over there waiting for them, it makes a big difference in their recovery. That gives them some more strength to fight the illness … and then, of course, in the end they get the joy of getting their wish.”

In the 22 years that Walsh has been a coordinator for Make-A-Wish, the most rewarding part of her job has been seeing the excitement and hope a fulfilled wish can bring to a family that’s going through a rough time, she said.

Due to accounting purposes, the foundation doesn’t restrict the funds to one child’s wish, instead pooling all the money together. As a result, Oakdale will not know who the recipient or recipients of the raised funds in honor of Ariel will end up being. However, they’ll have their hands full as the class that raised the most money gets a popcorn party as a reward.

“I am just so proud of my kids. I’m proud to work at Oakdale, where the community has really rallied,” the gifted teacher said. “They’re remarkable children. They have my heart and I love all of them,” Woods said.

Oakdale Elementary Principal Andrea Payne said she’s proud of the entire student body and their motivation to give to others.

“They really rose to the occasion. I had no idea it would get that much attention from them, but they really were into it,” the principal said.” And I was really proud, very proud of our kids.”