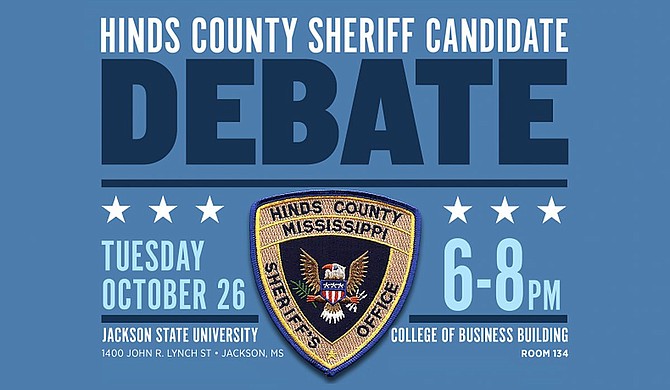 Jackson State University's Department of Political Science will host a debate between Hinds County Sheriff candidates running to fill the position of the late Lee D. Vance on Tuesday, Oct. 26, at 6 p.m. The event will take place in room 134 of the College of Business’ Pittman Auditorium (1400 J.R. Lynch St.). The debate is free and open to the public.

Dr. Maruice Mangum, chairman of the political-science department, will moderate the debate, which will cover issues such as safety, crime, violence and community relations.

Mississippi State University will begin its seventh annual interdisciplinary lecture series, "Race in America," on Friday, Oct. 29, at noon in McCool Hall’s Taylor Auditorium. The event is free and open to the public.

Jennifer Patrice Sims, an assistant professor of sociology at the University of Alabama in Huntsville, will present a lecture titled “Mixed-race in the U.S. and U.K.: Experience, Identity and Inequality.” Sims' lecture will explore everyday racialized experiences, racial identity development and the place of “mixed-race” in two racially unequal societies, a release from MSU says.

Sims co-authored the 2019 Emerald Publishing book “Mixed-Race in the US and UK: Comparing the Past, Present, and Future” together with U.K. researcher Chinelo L. Njaka. The book won the 2020 Mid-South Sociological Association Stanford M. Lyman Distinguished Book Award. She is also the editor of “The Sociology of Harry Potter: 22 Enchanting Essays on the Wizarding World,” a 2012 Winged Lion Press, LLC, publication.

MSU’s College of Arts and Sciences, the Department of Sociology and the African American Studies program sponsor the Race in America series. For more information, visit cas.msstate.edu.

United States Air Force Lt. Col. C. Alexander Lamkin will be the featured speaker for the University of Southern Mississippi's “Cybersecurity: Our Shared Responsibility” event on Monday, Oct. 25. The lecture will take place from 5:30 p.m. until 7 p.m. at the Fleming Education Center on the USM Gulf Park campus in Long Beach.

The event is part of Cybersecurity Awareness Month, which the National Cyber Security Alliance and the U.S. Department of Homeland Security launched in October 2004 to help Americans learn to stay safer and more secure online.

Lt. Col. Lamkin is the commander of the 81st Training Support Squadron located at Keesler Air Force Base in Biloxi, Miss., where he is responsible for faculty development of all local technical training instructors. He also supervises the development and maintenance of training products.

He is a graduate of Howard University, Washington, D.C., and received his commission through Air Force Reserve Officer Training Corps, Detachment 130 before serving as a Cyberspace Operations Officer. He has completed tours in Network Defense with the Defense Information Systems Agency, Network Exploitation with the National Security Agency, Offensive Cyberspace Operations with United States Cyber Command and deployment in support of the 101st Airborne Division at Bagram Air Base, Afghanistan and USSOCOM.