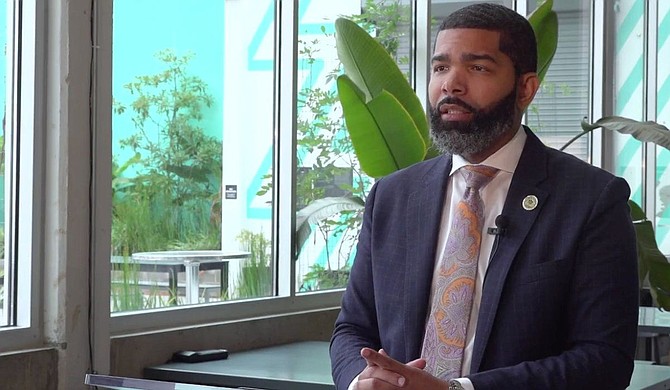 Mayor Chokwe A. Lumumba said on Tuesday, Nov. 23, that incorporating the voices of the people is an essential aspect of the year-long City’s bicentenary celebration kicking off by 3 p.m. today, at Thalia Mara Hall. Photo courtesy City of Jackson

The City of Jackson is kicking off the celebration of its 200th year of existence at 3 p.m. Monday, Nov. 29, at Thalia Mara Hall (225 E Pascagoula St.), with the unveiling of the bicentennial celebration logo, Department of Human and Cultural Services Deputy Director David Lewis told City Council members last week.

"This is just the kickoff," Lewis said at the Tuesday, Nov. 23, meeting. "It will be a really special moment, but we will be celebrating for 13 months."

The Council, later in the meeting, approved a resolution to recognize and celebrate the bicentennial from Nov. 29, 2021, through Dec. 31, 2022.

The resolution indicated that on Nov. 28, 1821, the state legislature selected LeFleur's Bluff to be the site of the new state capital, followed by the City's formal planning in April 1822.

"And most significantly, on December 23, 1822, the State Legislature established its seat by convening its first session in what we now know as the capital city," the resolution continues.

Lewis said the bicentenary celebration is significant and that the logo is a result of input received from people who live in different areas of the city.

"Visit Jackson had (an organization) reach out and do a focus group, and we had people from each zip code in our city represented at that table," the deputy director said. "They were paid for their time, and they were asked about the city."

"They didn't know they were talking about the bicentennial, but they talked about our city, and it was a really amazing feedback session that then influenced the design," he added. "The designer did several logos, and we went to a new focus group, and they picked the logo."

Lewis said that the celebration will incorporate ideas from the public. "If you have ideas about how to celebrate that, we welcome them," Lewis stated. "This is about the citizens; this is for the citizens."

During an earlier council meeting in June 2021, Lewis revealed some ideas for the bicentennial celebration, including highlighting 200 locally-owned restaurants, 200 unsung heroes, and 200 things to do in the city of Jackson, as well as creating a calendar of events for the 13-month celebration.

"We want to make sure that on our platform as a brand, what we are putting out locally and nationally are the citizens of Jackson," Lewis explained.

"We can't do it all ourselves, but want to create the tools to empower the citizens to do it so that they can have ownership in this; (so) they can be proud of this and so that when we hit the end of 2022, we have fully celebrated the bicentennial in every way that we can think of."

In a media advisory statement released on Tuesday, Nov. 23, The Tell Agency said that today’s event will include the launch of a bicentennial website.

“Leaders will unveil the new bicentennial logo, discuss upcoming celebratory events for the city, the Great Migration project, the future of the Jackson Planetarium, and more,” the statement said.