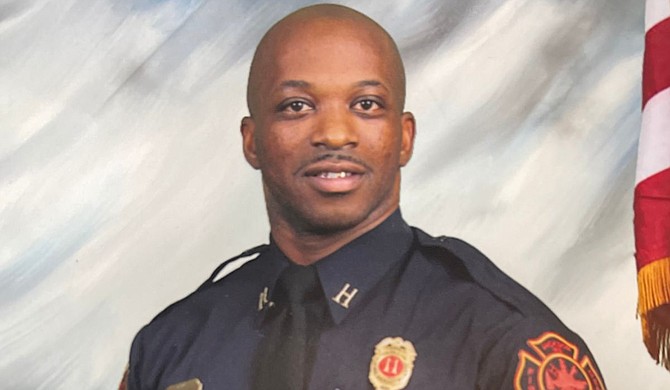 Biloxi-based Keesler Federal Credit Union recently named Captain Antonio Ross of the Jackson Fire Department as First Responder of the Year. Members of the JFD command staff nominated Ross for the honor and joined with Keesler staff to surprise him with the announcement on Tuesday, Oct. 26. Keesler also gave JFD a plaque and a financial award.

"I had no idea what was going to happen when some of the command staff invited me to come down that day, and hearing about the honor was quite a shock for me," Ross says. "I want to thank Keesler for giving the award out and my command staff for nominating me. I appreciate Keesler for recognizing the men and women who make up our first responders. I know what kind of job I do and what we bring to the City of Jackson, but it still feels good to be recognized."

Ross joined the Jackson Fire Department in 2002 and has been a member of several divisions, such as the Rescue 11 division, which is responsible for using tools such as the jaws of life, cutters and spreaders in responding to emergencies. He became a captain within the JFD in 2014, overseeing Truck 14. As a captain, he is in charge of ensuring all firefighters follow the safety protocols for the City of Jackson, as well as leading daily training sessions on tools and medical procedures firefighters need in the field.

"My crew relies on my skills, knowledge and leadership when I go in with them to fight fires," Ross says. "I'm responsible for making sure they come out and go home to their families each day. We also have to make sure we stay up-to-date in the medical fields of firefighting circles, because things change every day out here."

Ross grew up in Vicksburg, Miss., and graduated from Vicksburg High School in 1995. He enrolled at Hinds Community College in Raymond and was a member of its track and football teams. He moved to Jackson after graduating from Hinds in 1997.

After graduating Ross took a job as a warehouse worker for the Jackson UPS office. In 1998 he obtained a Class A driving license and spent several years working as a truck driver before simultaneously applying for JFD and the Mississippi State Troopers in 2002.

"I sent out both applications around the same time, but the fire department responded first, and it felt like something I was meant to do," Ross says. "When I was a kid, I didn't know what my path in life would be, but I knew I wanted to be able to do something important. I felt that becoming a fireman was something that was respectable and meaningful, as well as providing a good plan for retirement. Doing this job, I feel the love I get from the community for all we do to help. Even today, I feel the same way I did the first day I came home from the job, and I love it."

Ross and his wife, Tamesha Ross, live in Byram and have been married for 17 years. They have three children, Taylah, Tierni and Trenton.