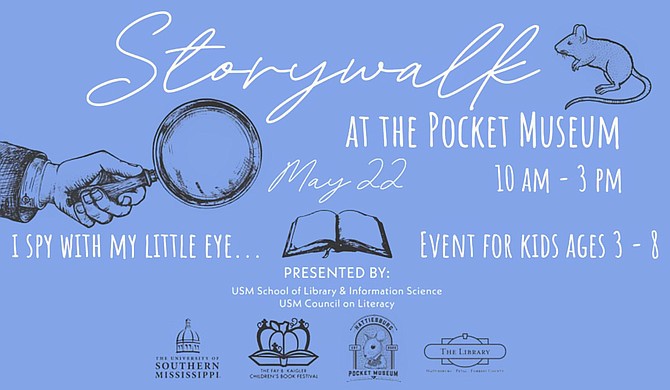 The University of Southern Mississippi's School of Library and Information Science will host a literacy and physical activity-themed event called StoryWalk on Saturday, May 22, from 10 a.m. to 3 p.m. at the Hattiesburg Pocket Museum. Photo courtesy USM

The University of Southern Mississippi's School of Library and Information Science will host a literacy and physical activity-themed event called StoryWalk on Saturday, May 22, from 10 a.m. to 3 p.m. at the Hattiesburg Pocket Museum (119 W. Front St., Hattiesburg). The event is free and open to the public.

Anne Ferguson of Montpelier, Vt., created the StoryWalk Project in collaboration with the Vermont Bicycle & Pedestrian Coalition and the Kellogg Hubbard Library. StoryWalk features signs modeled after book pages placed along a trail for participants to follow. The featured book for Hattiesburg’s StoryWalk will be Mouse Paint by Ellen Stoll Walsh.

The event will feature the oversized book, suggestions for physical activities, text translated into Spanish, QR codes linking participants to Summer Reading books at the Hattiesburg public library and suggested reads at displays in the surrounding area. The first 200 children to arrive at the Hattiesburg StoryWalk will be eligible to receive a free book from the USM Council on Community Literacy and Reading. Participants will also receive information about the Summer Reading Program at the Library of Hattiesburg Petal and Forrest County.

JSU to Hold Commencement Ceremony for Class of 1970

Jackson State University will hold a special commencement ceremony for the class of 1970 on the Gibbs-Green Memorial Plaza on Saturday, May 15, at 10 a.m. Members of the class will march in their regalia and receive their diplomas from JSU President Thomas K. Hudson.

Jackson City Police and Mississippi Highway Patrolmen marched on the Jackson State campus and fired nearly 500 rounds of ammunition in 28 seconds into Alexander Hall, a women’s dormitory, during the early morning of May 15, 1970. Police killed Phillip Lafayette Gibbs, a junior political science major, and James Earl Green, a senior at Jim Hill High School, during the shooting and shot twelve others. Flying debris, glass, and bricks injured dozens of other students. None of the officers who participated in the attack were ever held accountable.

JSU closed the campus after the shootings and cancelled graduation ceremonies for the class of 1970. In 2020, as part of the 50th commemoration of the Gibbs-Green tragedy, JSU had planned to invite the class to participate in its spring commencement ceremonies, but the university had to cancel the event due to the COVID-19 pandemic.

The Saturday event will mark the 51st commemoration of the Gibbs-Green tragedy. President Emeritus John A. Peoples will address the members of the 1970 class and deliver a posthumous presentation of Honorary Doctorates of Humane Letters on behalf of Gibbs and Green to their families.

JSU will livestream the event on the JSUTV Facebook page and the JSU Facebook page. Guests who attend in person must wear masks, undergo a temperature scan and practice social distancing. For more information, call the Margaret Walker Center at 601-979-3935 or email [email protected].

Mississippi State University's University Television Center was among the broadcast winners of the 2021 Regional Edward R. Murrow Awards and received 12 nominations for the 2021 Southeast Emmy Awards.

UTC filmed "The Last Supermarket" in Clarksdale in 2019 and 2020. The 30-minute documentary examines the impact to the Mississippi Delta community when its only full-service supermarket closed, leaving residents in a food desert with fewer options for nutritious food, MSU's release says. The documentary also serves as the pilot episode of “The Hungriest State,” a multi-part series scheduled to debut in fall 2021 that will investigate food insecurity in Mississippi. "The Hungriest State" is a project of MSU Films, the TV Center’s high-end short film production initiative, which is a partnership with MSU's Office of Public Affairs.

The Regional Edward R. Murrow Awards program recognized more than 350 local radio and television stations in all 50 states, the District of Columbia and four countries. Regional winners automatically are under consideration for a National Murrow Award. RTDNA will announce the winners of 2021 Southeast Emmy Awards in June.