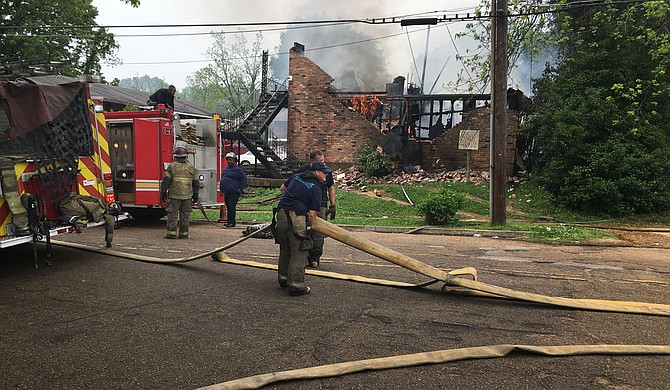 Firefighters were still on the job at an apartment complex on O’Ferrell Avenue, Jackson, as seen in this picture taken at 12:30 p.m. on Friday, April 16, 2021. Assistant Fire Chief Patrick Armon said the fire started at 10 a.m. Photo by Kayode Crown

As the smoke billowed from the raging fire at an apartment complex on O'Ferrell Avenue in Jackson on Friday, April 16, 2021, some of the people who lived there explained that the fire would not have been so ravaging had the Jackson Fire Department responded faster after they called 911. 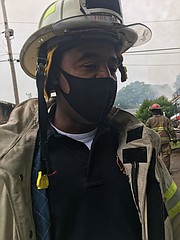 Firefighterswere still on the job at an apartment complex on O'Ferrell Avenue, Jackson, asseen in this picture taken at 12.30 p.m. on Friday, April 16, 2021. AssistantFire Chief Patrick Armon said the fire started at 10 a.m. Photo by Kayode Crown

"I don't know how (the fire) started, all I know is smoke coming in, and everybody had to get out; everybody (was) helping everybody to get out of the apartment (complex). That was it. The fire department took too long to come," said Richard Champion, one of the apartment complex's residents. He spoke to the Jackson Free Press at about 1 p.m., as the fire crew continued the battle to contain and quench the fire that had started about three hours before.

Champion said he had called 911, but "no one answered the phone." But when his neighbor Elbert Williams called the number, he was told that help was on the way. But after waiting for about 30 minutes, Williams got in his car and drove to the nearest fire station located at the Jackson Zoo, within a mile from the apartment complex.

Mississippi Rep. Zakiya Summers, D-Jackson, on Friday, April 16, 2021, collected the names of those affected by the fire outbreak at the apartment complex on O’Ferrell Avenue to get them help. Photo by Kayode Crown

When he got there, what struck  Williams was that the fire crew members were not in official clothing, getting ready to come to their rescue and that if he did not come, they would not have been aware of the fire outbreak nearby, regardless of the 911 call. "We (called) them about 30, 40 minutes before the fire got that bad. They could have come to put it out," he said.

Patricia Nelson had left the apartment complex four months earlier due to what she described as the deteriorating condition of her apartment there, but her son continues to stay there. She said the fire started from her friend Debbie Barnes' apartment. 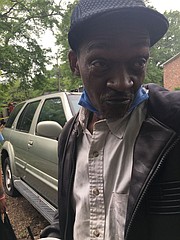 On April 30,2020, Elbert Williams stands by the car he said he drove to the Livingston ParkFire Station to call on the fire crew on Friday, April 16, 2021. He said hefirst called 911; but went there himself because no help arrived as promised. Photo by Kayode Crown

"The fault came from the wiring in the wall in her apartment," she said sitting beside Barnes on a stone. They and others from around the area looked on as the fire continued to consume people's properties across the road, beyond the police's do-not-cross yellow tape. The apartment complex owner gave his name as Terry but declined to speak with the Jackson Free Press, saying he is busy trying to provide temporary settlement to residents the inferno left without a home..

Mississippi Rep. Zakiya Summers, D-Jackson, came to the scene shortly after 1 p.m. and started getting the names of those the fire affected to help get them assistance.

"I was watching the video as it was happening live, and I just felt so sorry for the families that have been displaced," she told the Jackson Free Press. "This is a devastating, traumatic event, and I knew there wasn't much I could do while the fire was going on, but I said, at least I can start to point some resources and organizations to help the folks that, you know, don't have anywhere to go with this."

"In November 2019, the City of Jackson entered into an agreement with Tyler Technologies New World Public Safety System for software, hardware, training, and implementation services for a new Public Safety System for Police, Fire and 911," the City of Jackson Director of Administration Lawanda Horton wrote in a March 16 memo to Mayor Chokwe A. Lumumba, backing up a spending change in the city's contract with the company.

Calvin McCalpin(left) entered Debbie Barnes' (right) room and carried her out after the fire started in her apartment. Photo by Kayode Crown

Horton put that item on the agenda for the city council's March 30 meeting, and Ward 7 Councilwoman Virgi Lindsay used the opportunity to inform the body of the inefficiency in the running of the 911 system in the city. "I'm getting phone calls, and I think we all are, about people, when they're in a real emergency (not getting) a response from 911," Lindsay said at the March 29 council work session.

Lindsay wanted to know when the 911 system will be working well to gain the confidence of Jacksonians. The mayor could not provide an answer, deferring to Deputy Police Chief Tyrone Buckley, who pointed to staffing issues. "Currently, we are budgeted for 47, (but) we have 31 employees (in the 911 system)," Buckley said. He explained that there are six to nine 911 dispatchers on each of the three shifts.

The Jackson Free Press reached out to Buckley on Friday, April 30, with this reporter sending him two phone numbers to confirm what happened when the apartment residents called 911 on April 16. He did not pick up the call the reporter made to his phone on Sunday, May 2, and Monday, May 3, and did not reply to the voice messages as at press time.

The mayor, at the March 29 work session, indicated that new federal requirements are proving a burden to the staff, especially amid the pandemic. "We were under a deadline by the federal government to change to a new system; and so what has happened is that there are more fields to fill out for our 911 call takers," he said. "And that has led to the delay in many of them being able to get to the calls as quickly as they were previously."

"And so we want to see what fields we can eliminate and make sure that they become more acclimated to the system."

Then-President Donald Trump signed the Consolidated Appropriations Act of 2018, which included the RAY BAUM'S Act, into law. "Section 506 of RAY BAUM'S Act requires the Commission to 'conclude a proceeding to consider adopting rules to ensure that the dispatchable location is conveyed with a 9-1-1 call, regardless of the technological platform used and including with calls from multi-line telephone systems' by September 23, 2019," the Federal Communications Commission said in its guidance on the law that it released on Aug. 2, 2019, where it stipulated a two-year adoption deadline.

Take Care of the Staff

"Nearly 660,000 calls are made to 911 each day. For many callers, that day may be the worst day of their lives. They need to know that their call will go through and that help will soon be on the way," Federal Communications Commission member Geoffrey Starks wrote in the FCC document.

Ward 1 Councilman Ashby Foote said that the inefficiencies in the running of the 911 system in the city might be due to staffing issues, and decried the "excessive time for the response to get through to the citizens" in some of the cases brought to his attention.

"We've received some complaints in slow response to the 911 calls," he said in a phone interview on Thursday, April 22. "We need to address that and make sure that the 911 service is properly staffed so that we can be responsive to the needs of our citizens when they call."

Ward 4 Councilman and District 66 House Rep. De'Keither Stamps pinned the problem to the need for better working conditions for dispatchers. "I'm not satisfied with where we are. We've got to work hard to get to a better place," he said. "We have to take care of the people who work in the dispatch office better by giving them better working conditions, pay and a work culture so that they can deliver their best work to the citizens of Jackson."

Cause of Fire Undetermined

Assistant Fire Chief Patrick Armon told reporters at the scene of the April 16 fire that it started around 10 a.m.

"Then someone walked to the fire station, which is located at the zoo, which is not far from here and reported the fire to the crew that were at that station," he said. "They responded and found, when they got here, that the fire had already broken through the roof and that they had a lot of flames showing when they got here."

The initial attempt by the fire crew to contain the fire did not work as its power had grown before they got there. They started with lines of fire hoses, then resorted to ladder trucks. At that time, Armon said the cause of the fire is unknown, but an arson investigator will do an assessment.

"We know the origin, but we don't know the cause; the origin was on the first floor in one of the apartments' bedrooms. What caused it, we don't know, so it's going to go as undetermined," Armon told the Jackson Free Press in a phone interview on Thursday, April 22.

He said "as far as" he knows, the crew did not respond to a 911 call, but that someone came into the Livingston Park Fire Station to inform the crew. "That was how it was reported," he said.

Debbie Barnes said on April 16 that the fire started from her apartment. "The wire (in the wall) caught fire when I was laying in the bed," she told the Jackson Free Press.

Another resident of the apartment, Calvin McCalpin, said that the first thing he noticed was the smoke that became heavier by the minute, and eventually he noted that the ensuing fire gutted eight apartments.

"We first thought that it was something behind the building, but once everybody recognized that the building was on fire, we tried to get everybody out as fast as we can to make sure everybody got away. There was much stuff left behind; plenty of people lost their homes," he said. "(The fire department) was almost 45 minutes to an hour late trying to get here anyway."

"We (were) constantly calling, calling, and calling and ain't nobody picking up the phone," McCalpin added. "What more does it do to be in emergency contact if y'all can't pick up the phone?"

He confirmed what Williams said about driving to the fire station to call the firemen to action.

"We even had people drive down there in their car just to go down and get them," he said. "One person came back and said they are down there watching TV; I mean, come on, y'all supposed to be doing y'all job."

McCalpin said he was the one who carried Barnes, an older woman, out of her apartment to safety.

"These elderly folks stay over here, the lady I rescued, I went and rescued, (that) I got out of the house, she was half paralyzed. So she can't do nothing for herself. This don't make no sense, the way the city of Jackson is going," he said.