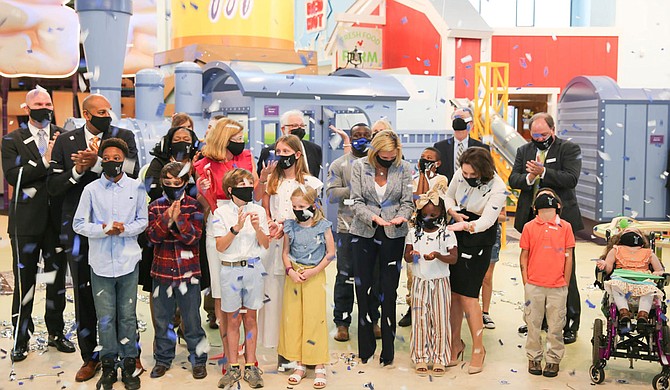 The Mississippi Children’s Museum in Jackson opened its first satellite museum in Meridian on Saturday, March 27.

The Jackson location first opened in Dec. 2010 and has seen more than 1.4 million visitors over the past 11 years, a release from MCM says. A group of volunteers from Meridian requested assistance from the Jackson location to open a new museum in 2015.

MCM-Meridian features the nation’s first permanent Goodnight Moon exhibit, a brainiac climber, a library, a 25,000 square foot garden, a WonderBox tinkering lab and more. Each gallery is designed based on MCM-Meridian’s educational initiatives, which include STEAM, literacy, health and nutrition and Mississippi heritage.

The International Museum of Muslim Cultures in Jackson recently announced its sixth annual program of cultural and educational events commemorating Islamic Heritage Month, which the City first designated in 2016.

Islamic Heritage Month began on Saturday, March 27. The museum is partnering with Atlanta-based Muslim Mix for a program called the "Era of Woman," which is an inter-generational conversation between leading African-American Muslim women such as IMMC President and Co-founder Okolo Rashid and senior board member Ayesha Mustafa.

In partnership with the Islamic Arts Society of Houston, IMMC will host a Faith in Art series which includes an artist talk on April 1 titled "A Cross-faith Trajectory into Islamic Art." The talk will feature Hindu artist Sangeetha Kowsik and Jewish artist Paul Barchilon, along with IMMC Deputy Executive Director Lina Ali. Turkish "Ebru" art and geometric pattern design demonstrations are also part of the series.

IMMC will be hosting a live virtual concert on April 3 titled "Unity in Diversity: An Interfaith Journey of Music and Dance." The concert will include Chicago-based musical collective Surabhi Ensemble and Diwan Al-Han joined by Sufi dervish and African griot artists performing classical, folk, and spiritual music and dance traditions from Africa, India, the Middle East, Spain and the Americas.

For more information on the programs offered by the museum for Islamic Heritage Month, call 601-960-0440 or visit muslimmuseum.org.

The Easter Bunny at Fresh Market

For Easter, The Fresh Market in Jackson will have the Easter Bunny meet and greet guests at the Easter meal pick up concierge table in the store, as well as hand out jellybeans and pose for socially distanced photos from April 1 through April 3 from 11 a.m. to 5 p.m.

Customers can place online orders at shop.thefreshmarket.com or by downloading The Fresh Market’s mobile app on the App Store or on Google Play to order groceries for curbside pickup or delivery.