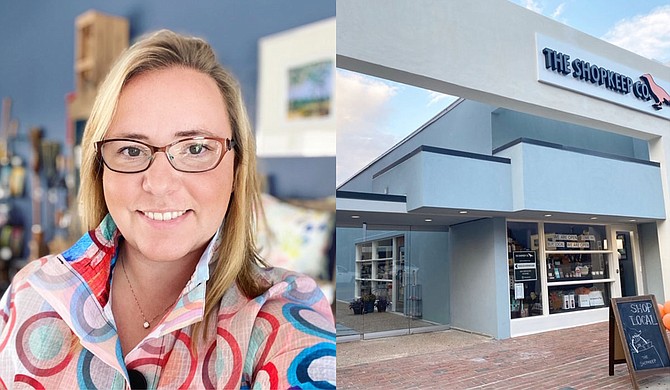 Perched above the storefront, an orange raven welcomes customers to The Shopkeep Co., a store that sells wares produced by American creators. Photo courtesy Hallie Harris

Hallie Harris, an artist who long dreamed of opening her own store, made that dream a reality when she opened The Shopkeep Co. in downtown Jackson in October 2020. Located at 418 E. Capitol St., Harris' store specializes in American-made goods, including bath-and-body products, artwork, kitchenware, party goods, toys and more.

"When my husband and I moved to Jackson two years ago and saw the downtown area, we thought it was the perfect place for a business," Harris says. "I believe that supporting American-made goods is important because of the number of craftsmen and artisans here who offer a quality that can't be matched. We're representing 32 states in the shop so far, and I enjoy being able to share our vendors' stories with Jackson." 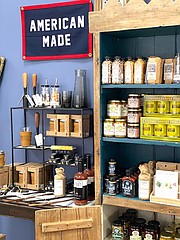 Many of the vendors The Shopkeep Co. represents call Mississippi home, including those who supply coffee made in Laurel, bath-and-body products from Canton, and ornaments and other art pieces of Harris' own making. The store also has handmade items such as brooms from Alabama, thumb pianos from Georgia, jigsaw puzzles from Tennessee, and other items including leather bags, mixing bowls and pie plates crafted to last for many years.

"What's even more important to me than where an item came from is the memories you'll make with a particular item," Harris says. "I want to provide the kinds of things that you can use in the kitchen with your kids while they're growing up and then pass it down through the family for years to come."

Harris was born in Canonsburg, Pa., and graduated from Chartiers-Houston High School. She taught herself to draw from looking at drawing notebooks her parents kept around the house and took to the craft "from the time she could pick up a pencil," she says.

After a family friend asked her to paint a mural for a baby's room and began recommending her to other people in her neighborhood, Harris set up her own local art business while still in high school, painting murals in people's homes or painting designs on the windows of businesses.

"My artistic focus has changed a lot over the years, but I've always had a focus on vibrant colors, whether it be in portraits, landscapes or anything else," Harris says. "I'm always looking to evolve my art and try new things."

Harris met her husband, Bruce Harris, through her former first-grade teacher, who was also a family friend. In 2007, she invited Harris on a trip to meet her nephew, who lived in Lake Bay, Wash. That nephew turned out to be Bruce, and the two immediately hit it off, Harris says. She returned home to Pennsylvania to take part in an art festival there but returned to Washington later that year. The two married and spent 11 years living in Seattle before moving to Terry, Miss., with their daughter Luca in 2019.

In 2008, Harris and her husband opened Freight Forwarding Logistics Company together, which moves domestic shipments for various companies in the United States.

"My husband had been in logistics since he had been in high school, and this was something we had really wanted to do for ourselves," Harris says. "We opened and kept up our own business even during the 2008 recession, so when we decided to open The Shopkeep Co. last year even with the pandemic going on, we knew the challenges were nothing to be afraid of for us."

After picking out a location for her store in downtown Jackson, Harris had to wait a year to actually prepare the building for opening, and spent that time going on the hunt online for unique American-made wholesale goods that represented what she envisioned for her store.

"We included an orange raven in our store's logo, which references our love of shopping and of unique, shiny items," Harris says. "We wanted to have a store full of our favorite things. Capitol Street has seen a lot of remodeling, and the first thing I want to see after the pandemic ends is people filling these storefronts to make Jackson a vibrant city again. I want to see local small businesses when I go to a city, because those quirky small shops are what make a town come alive."