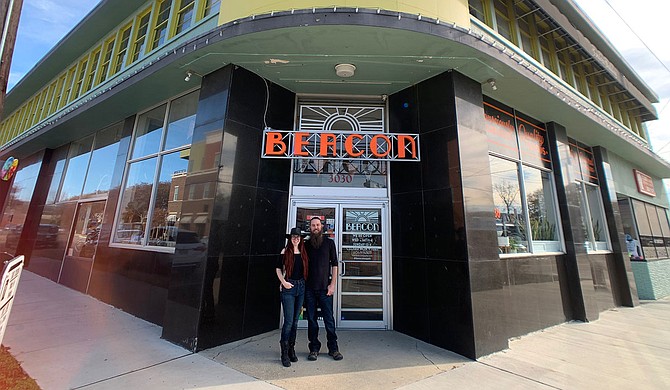 Nicole Wyatt Jenkins distinctly remembers the night that she met her husband. She was on a date with the manager of a local Mexican restaurant. Jason Jenkins was completing a live painting beside a band on the patio. During an intermission, he noticed her at the bar and struck up the nerve to introduce himself.

"I ended up talking to him all night," Nicole says. "He called me the next day, we went on a date, and we have literally spent every day together since."

The pair found that they had quite a bit in common. With no siblings, each of them had grown up in homes where they used their creativity to entertain themselves, as both of their mothers had molded their respective natural artistic abilities at an early age.

Jason, a Jackson native, holds a bachelor's degree in graphic design from the University of Southern Mississippi. His mother, Martha Ann Knight, was also a local artist who did traditional hand drawings and paintings. She passed all of her knowledge down to Jason.

As Nicole speaks, she fondly fingers a charm bracelet Jason gave to her. It was a prize that his mother won after placing second in a local art contest.

"It was one of the first gifts he gave me after we were together," Nicole says. "It was so meaningful."

Nicole grew up on a sheep farm in Bunker Hill,  W. Va., where she learned the art of weaving from her mother, a fiber artist. Nicole helped her mother shear the sheep, clean it, spin it into yarn and use it for knitting. At age 9, Nicole and her family moved to the Jackson area. She went on to earn a bachelor's degree in public relations from Mississippi State University.

Jason is well known for his live paintings, but he is also a muralist. He produced all of the murals at Martin's Downtown and the traffic box on the corner of Gallatin Street and Highway 80. In addition to his love of starscapes, he creates comic books and adult graphic novels. His art was recently featured at Designer Con in Los Angeles.

Nicole works in macrame and weaving, as well as hand lettering and calligraphy. She often creates videos for Instagram lettering her favorite sayings and quotes. Nearly four years ago, the couple decided to make their passions their career.

In 2017, the "couplerenuer" opened The Beacon. They secured the State Street space after noticing the  Fondren Art Gallery vacating the building. The duo then spent time reinventing the space to fit their unique vision. Customers entering the Fondren building walk on the surface of the moon while surrounded by stars in the galaxy. Vintage bicycles hang from the ceiling.

They call the business a "consciously curated general store for the modern creative." Visitors can browse ethically produced sustainable goods that are either fair trade, locally created or American-made. The couple is meticulous about ensuring that all the products offered in their store are either made sustainably or are offset. They even use post-consumer recycled shopping bags, ship using reused materials and plant-based home-compostable mailers, and recycle religiously.

The Beacon features basic art supplies in addition to an eclectic mix of unique merchandise, like handmade watercolors created by an indigenous maker in Canada who hand-harvests and grinds the stones before mixing them with local honey and water to create a vibrant paint. Nicole creates custom incense scents, while Jason's love of servicing and repairing typewriters and fountain pens helped birth the store's vintage section. His prints and illustrations are also available for purchase, as are signature enamel pins and stickers. Candles, jewelry, crystals, spices, skincare products and myriad other gifts fill the store.

Social responsibility and community service are important to the Jenkins duo, as they partner with One Tree Planted to ensure that a tree is planted in southern forests for each paper or pencil product sold. The business also donates full class packs of Crayola supplies to the Murrah and Forest Hill high schools, as well as Power APAC. Additionally, The Beacon donates 5% of all CBD sales to the Last Prisoner Project and The Equity Organization. Recently, the pair donated funds to Shower Power to help provide hygiene services for unhoused citizens, and they make regular donations to The Good Samaritan Center.

"When Jason and I established The Beacon, we wanted it to be a place that also gave back, not just to take and to sell. We make it a point to donate funds and products to organizations in need," Nicole says.

Like many local small businesses, the onset of the pandemic has strongly affected The Beacon. In January 2020, the couple finalized plans to convert a portion of their store into an art gallery. They planned to use the space to showcase Jason's artwork and to expand into more art ventures. The two had plans to curate gallery art shows and create more collaborative art projects as a couple. However, the plans had to be put on hold.

Because Nicole and Jason are immunocompromised, The Beacon's storefront remains shuttered, but the business is still meeting the needs of local creatives. Nicole has created a shoppable Instagram page and website, and they offer no-contact pickup, free same-day delivery in the local area, and shipping across the United States and Canada.

Feeling that it is more important now than ever to support local businesses, the couple features a "Mississippi Made" section on the shop's website, showcasing products from local vendors. The store's "Consciously Curated" Beacon Boxes contain a number of locally made goods, to offer another means of supporting local creators.

"All local businesses are really struggling, and we all need the support," Jason says. "If you wait until that business has to say we really need your support, it may be too late." Nicole adds: "It is very important to seek out local (businesses) first. Local businesses are members of your community. These people are your neighbors."

The Beacon's physical address (3030 N. State St.) is temporarily closed due to the pandemic. Patrons can shop online at thebeaconsupply.com or on Instagram at @beaconsupply.