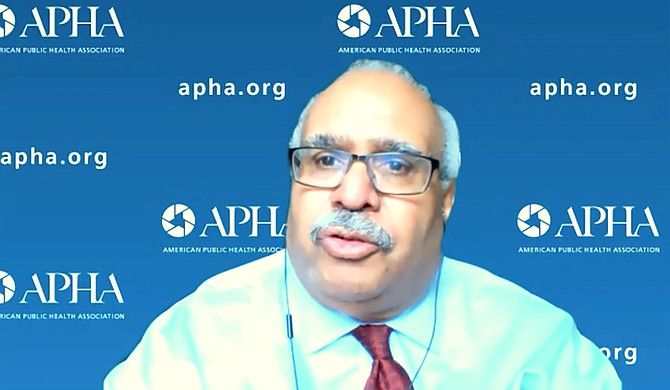 Benjamin explained the process of vaccine formation based on the messenger RNA platform of vaccine production and debunked the claim by anti-vaccine advocates that the mRNA platforms of those vaccines will lead to permanent changes in the cell.

"There is a (spiky) protein on the virus. Scientists create artificially a little piece of messenger RNA, which is then put into a little fat globule, and then they put that into a vaccine, and they inject that in your arm," he said.

Benjamin, executive director since 2002 and a member of the National Academy of Medicine, said the body destroys and disposes of the genetic material associated with the vaccine rapidly.

"This genetic material does get destroyed very quickly by your body once it does its work, once it copies the spike protein, and it makes these spike proteins. That material is rapidly destroyed," he said. "It does not go into your DNA. It does not go into the nucleus of your cells. It doesn't impact your genetic makeup. It can't make you sterile. It can't give you the virus.”

"They can't do any of those things because it's not a live particle. It's not, it's not a real virus, it's only a piece of the genetic structure of the virus, so (it) obviously can't give you COVID-19."

No Vaccine Lost Because of Winter Storm

"The Pfizer vaccine (is) the one that has to be at the very ultracold; it comes in a (package) that has dry ice in it. So it's not dependent upon that electrical supply. We were able to recharge that dry ice and keep the Pfizer frozen and keep it viable," he said. "(For) Moderna, even if we, if it becomes unfrozen, it can be stored at refrigerator temperature for up to 30 days and remain viable."

How Johnson & Johnson Vaccine is Different

Dr. Benjamin said that the Johnson & Johnson vaccine that the FDA approved for emergency use over the weekend is not an mRNA vaccine.

"What the Johnson & Johnson vaccine does is it takes (an) adenovirus, which cannot make you sick, and they put in that virus a little piece of the DNA for the SARS-COV-2 virus that (causes) COVID, and then that DNA goes into your body. (It) then makes the mRNA and does exactly the same thing (as Moderna and Pfizer vaccines) from a biological process,” he said.

While the Johnson & Johnson vaccine stimulates the body's RNA to create mRNA, which leads to antibody creation for better response to the virus, Moderna and Pfizer vaccines introduced the mRNA directly into the body.

"What the mRNA platforms do is they cut out the middleman, the middleman being the RNA, the adenovirus, so it's just a different way of delivering it into your body,” Benjamin said.

He said the consensus is that the vaccines still work for the new strains of the coronavirus. "These viruses change all the time. This is not unusual, but we're now seeing it to be a little bit more infectious, depending on which strain you're looking at," he said. "Most (experts) don't believe it has escaped the vaccine, meaning that the vaccine still works."

Benjamin explained that the vaccine's rollout has been successful as 68 million people in the United States have gotten a shot: "46 million (have) had one, and 21 million have had two shots and no significant safety concerns have been seen other than some allergic reactions.”

These reactions include sore shoulder fever, headache, muscle aches and fatigue, indicating that the vaccine is working on the body.

Benjamin said there are questions involving the effectiveness of the covid-19 tests to detect the new strains of the virus."I know some of the testing companies are beginning to look at whether or not the vaccine of the viruses escaping some of their tests, meaning that the tests may not be as accurate in some situations,” he said. “But I do believe at the end of the day, the end is in sight for this epidemic."