‘This is Important for Your Health’: FLOTUS Visits Jackson to Push Vaccinations 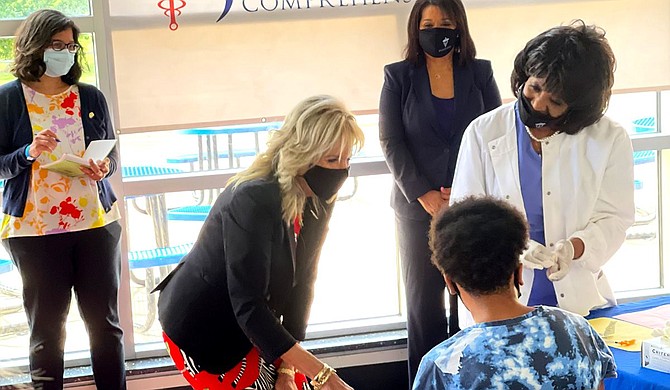 Dr. Jill Biden holds Christian Lyles, 13, who was afraid of needles, as nurse Maggie Bass administers a vaccine to him on Tuesday, June 22, at Jackson State University. The first lady was in Jackson to draw attention to the need for the people to get vaccinated. Photo by Kayode Crown

Dr. Jill Biden held 13-year-old Christian Lyles, as he received vaccinations at Jackson State University, during her visit to the school on Tuesday, June 22, as part of White House's drive to shore up vaccination numbers in Mississippi.

"That young boy who was in there, I mean, I could identify with him because I said to him, and he was a middle schooler, and I said, you know, are you scared of needles? He said, ‘yes, I'm scared of needles.’ So I know how that feels, but it took, it was like so fast. It's like two seconds, and it's done," the first lady said to Jackson leaders after touring the vaccination site at the university.

Jackson-Hinds Comprehensive Health Center regularly conducts a vaccination exercise at JSU, and hundreds have received either the Pfizer or Moderna vaccine there.

JSU President Thomas K. Hudson, who joined U.S. Rep. Bennie Thompson, Mayor Chokwe A. Lumumba and other city leaders to receive Biden, told the Jackson Free Press that the school was then holding its 14th vaccination clinic that day. The clinic is open to the public and announced beforehand.

"This was just a normal vaccination clinic day that thankfully with the first lady coming to make the tour of the facility, (she will) really see the various ways we try to serve the community," Hudson said.

Hudson said he hoped Biden coming around will create a "better awareness and motivate people to really take the vaccine.”

“We had a lot of demand and a lot of excitement at first,” he said. “It's kind of waned a little bit, but let's hope we get that excitement back and get as many people vaccinated as possible."

White House coronavirus coordinator Jeff Zients said at a Tuesday press briefing that the administration will not meet President Joe Biden's original goal of one dose of vaccine for 70% of adults by July 4, The Washington Post reported.

"In a lot of ways, the vaccines feel like a miracle, and they were rolled out in record time, and they've worked much better than we'd hoped," Biden said to those gathered at JSU on Tuesday. "But still, and I'm sure a lot of you hear this, there's a lot of misinformation out there, and people have a lot of questions."

"While these vaccines might be new, the technology behind them really isn't new at all; scientists have been studying similar viruses and working on this type of vaccine for decades," she added. "These are a result of decades of rigorous scientific research and discoveries, and they've been held to the very same safety standard as every single vaccine that we've had here in America."

The first lady, who did not field questions from reporters on the visit, said it is not enough that only about 35% of Mississippians have been vaccinated. She touted the vaccine's effectiveness and explained that most places no longer require vaccination appointments, so walk-ins are allowed. She informed the people that Uber and Lyft are offering free rides to vaccination sites, and the vaccines are free.

"And this is important for your health, and studies show that they offer almost perfect protection against death or hospitalization,” Biden said. “So you have to think about that. You may think, ‘Oh, I'm going to be fine,’ but you have to get the vaccine because that's what you're risking."

Gov. Tate Reeves did not participate in the event, citing late receipt of communication from the White House and prior engagements. WLBT's Josh Carter reported that Reeves did not receive an invitation to participate at the event until 9 p.m. on Monday.

"The vaccines are safe and effective and are an important part of our path beyond Covid, and we welcome the First Lady of the United States, or anyone else, to help spread that message and encourage more vaccinations," Reeves posted on his Facebook page at 12:49 p.m. on Tuesday.

"We are proud of the fact that Mississippi was one of the very first states in America to offer all Mississippians access to a vaccine,” Reeves continued. “To date, we have administered 1.99 million doses. We only have 90 of our fellow Mississippians hospitalized - down from 1,444 - and are reporting only 67 total new cases today - down 98% from a peak of over 3,000."

Rep. Thompson, who is Congress’ Homeland Security Committee chairman, said the State of Mississippi had not taken advantage of 100% funding available from the Federal Emergency Management Agency for efforts to increase the vaccination rate.

"We have to encourage our governor to step up and accept the money and work with the partners all over our state so we can get off the bottom. I encourage the governor to do that," he said before introducing Biden to speak at JSU. "You understand the value of why she's here, because it's so important, given the demography of the population that's most vulnerable."

Thompson said there is no alternative to vaccination. "It's either the shot or, perhaps, unfortunately, an untimely death," he said.

At the event, the mayor decried the low vaccination rate in the state, which is below the national average of 53% one-dose and 45% full vaccination rate. "And as we all are itching to drop the masks, it is our vaccination rates that will make us safer and enable us to not only operate an economy in the presence of COVID-19 but be able to restore some semblance of normalcy," Lumumba said at the event.