Hattie's Chicken and Waffles, Fondren Live and Lap of Love 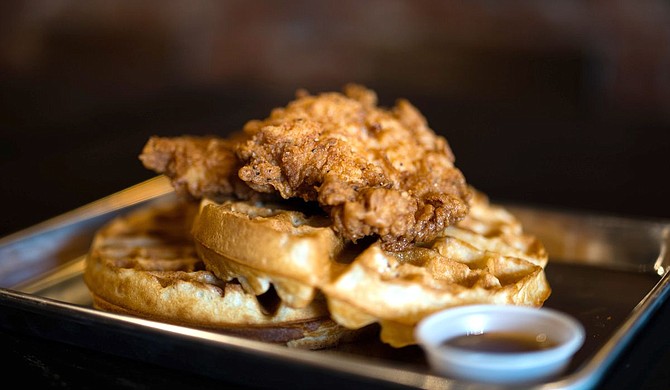 Brown named the restaurant in honor of his grandmother, Hattie McCullough, who passed away in 2020 during the COVID-19 pandemic.

"During quarantine, my wife and I tried looking around for good food to go, but there just weren't a lot of options for chicken and waffles in the area," Brown says. "I felt like I wanted to open just that kind of place for the Jackson community.

Brown was born in Canton, Miss., and grew up in south Jackson. He graduated from Terry High School before enrolling at Jackson State University, where he received a bachelor's degree in business administration in 2009 and a master's degree in the same subject in 2010. Brown is also an attorney and opened his personal practice, the Law Offices of Carlton M. Brown, PLCC, in Jackson in 2013. His wife, Ashea Brown, is also an attorney with the firm, which specializes in personal injury and business law.

"We purchased a building that's near JSU for the restaurant because I have a deep love and passion for the area," Brown says. That's why we're also purchasing several other properties nearby to renovate for housing. We want to uplift the community and bring back jobs and opportunities to Jackson."

In addition to chicken and waffles, the menu at Hattie’s will include chicken sandwiches and chicken tenders in original or Nashville Hot flavors, fries, greens, macaroni and cheese, honey rolls and Rap Snacks chips. The restaurant will have a patio as well as a drive-thru and curbside service.

The event, which takes place on the first Thursday of each month, includes food and live entertainment options throughout the Fondren Business District, including street performers such as dancers, musicians, magicians, fire-eaters and harmonica players.

Maps of buskers and other food and entertainment options for each event are available at the SoFo Selfie Station near Walker's Drive-in in downtown Jackson.

The next Fondren Live is scheduled for Thursday, July 1. Fondren Live will begin at 6 p.m. with buskers performing until around 8 p.m. throughout Fondren. For more information, visit fondren.org.

Lap of Love in Jackson

Lap of Love is part of a network of veterinarians that offers family-centered in-home hospice and euthanasia care for pets. The service offers comfort and quality of life care for terminally ill or geriatric pets until a natural death occurs or the family chooses humane euthanasia, a release from Lap of Love says.

Teleadvice appointments are available to discuss quality of life and end of life care. For more information, visit lapoflove.com.