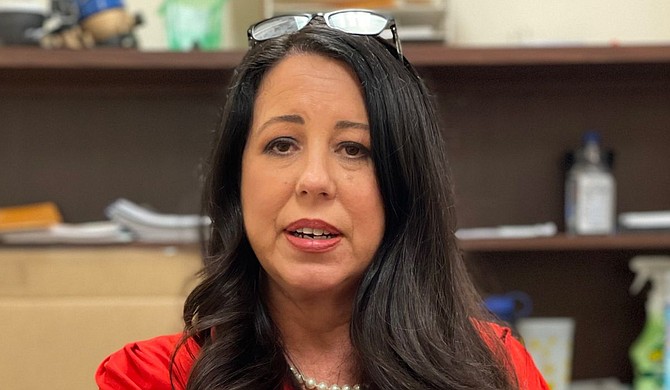 Public Works Department Deputy Director Carla Dazet explained that the City of Jackson plans to test for lead in the water going to every property in an interview in her office on Tuesday, June 15. Photo by Kayode Crown

The plan to overhaul the water-billing system in the City of Jackson will include testing each property for levels of lead, Public Works Department Deputy Director Carla Dazet told the Jackson Free Press in an interview on Tuesday, June 15.

"[W]e're going to go to every service line and test it for lead, so that is a water quality issue that we'll be able to identify which homes have higher levels coming into (their) water supply," she said. In a text message on Thursday, June 17, she said that the information will inform future action. “They will become the basis for a lead pipe replacement program consist(ent) with the requirements of the Safe Water Drinking Act,” she wrote.

Water bills in Jackson usually include a warning about possible high lead levels in homes. "The City of Jackson found high levels of lead in drinking water in some homes. Lead can cause serious health problems," it states.

The Environmental Protection Agency said that lead in water at whatever level is unsafe.

"EPA and the Centers for Disease Control and Prevention (CDC) agree that there is no known safe level of lead in a child's blood. Taking action to reduce these exposures can improve outcomes. Lead is harmful to health, especially for children," it stated.

"Lead pipes are more likely to be found in older cities and homes built before 1986 (Jackson is 199 years old). Among homes without lead service lines, the most common problem is with brass or chrome-plated brass faucets and plumbing with lead solder."

The overhaul of the water-billing system in the city involves new meter installation, which contractors may be able to begin in July, starting with a small number of commercial and residential customers, eventually changing the whole system over the next several months. This initiative comes after an earlier botched water-meter replacement contract with Siemens.

"So we're putting the policies together right now or fine-tuning them," Dazet said on Tuesday. "It's a very comprehensive plan."

"It's not only about writing off balances, (but) it's also about conservation and education on how to reduce your energy bill, like your efficiency," she added. "I don't think customers realize that old fixtures really are expensive in a home, like an old toilet built before 1985. They say you could save $279 (per year) just by replacing the toilet with an energy-efficient one."

Dazet said that the City plans to first point people toward the federal funding available through Mississippi Home Corporation for utility payment.

"Right now, there's $186 million (of federal money) out there. We're going to try and steer them through that first before we make them eligible for this program," the deputy director said.

"We don't need to just figure out a way to do something now; we need to figure out a sustainable plan, and so we're working towards that."