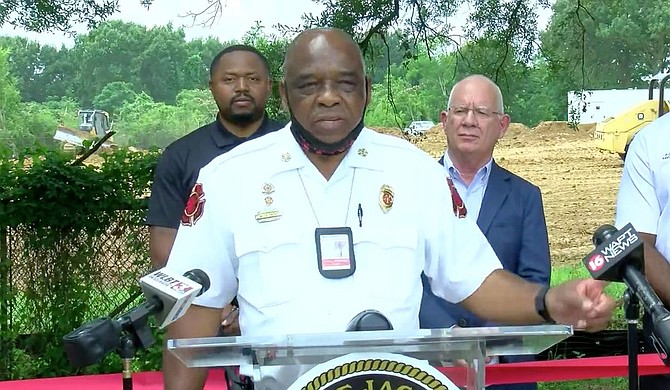 A new fire station, Fire Station #20, is under construction to replace an old one falling into disrepair along Medgar Evers Boulevard. Jackson Fire Department Chief Willie G. Owens, architect Steve Davis of Canizaro Cawthon Davis and engineer Jonathan Logan of Castle Black Construction joined Mayor Chokwe A. Lumumba on Monday, June 14, in the ribbon-cutting ceremony signaling the start of the construction, with completion scheduled for next year.

The fire chief said the new building will feature a safe room to protect people during inclement weather. "I think that's one of the biggest aspects of this building being built along with several other things," he said. "We've had a lot of issues with this particular building; of course, it's the Yazoo clay problem."

"We've had a lot of plumbing problems because of the Yazoo clay problem," he added. "We spent a lot of money just on plumbing issues with this building; so we felt like if we could get a new building to be built, it would be a lot better for these firefighters."

Davis said that the new building will have modern features. "The station that we're building here is a twenty-first-century station designed for the way that we want our firemen to be living and working," he said. "We've made an energy efficient building with a full building generator."

"In the case of an emergency, the building won't lose power; they can continue to serve the surrounding community no matter what the power situation is."

The city of Jackson will, on Saturday, June 19, hold a fireworks display and other activities to celebrate Juneteenth. On June 19, 1865, Union Army general Gordon Granger informed the last Black slaves in Texas that they were free, two and half years after President Abraham Lincoln's Emancipation Proclamation. The Mississippi legislature recognized the celebration in 2010, becoming the 36th state in the nation to officially designate June 19th as Juneteenth. The date is not, however, a state holiday.

"Juneteenth for many of us represents our 4th of July, our independence, our liberation day," the mayor said at a press conference on Monday, June 14. "We need to push for this to be a state-recognized holiday so that those individuals whose history and legacy recognizes the importance of this day can truly honor the history of our ancestors."

Smith Robertson Museum and Cultural Center will offer free admission between 10 a.m. and 1 p.m. that day. "The museum serves as a wonderful place where you can come, and you can visit, (and learn) not just the Jackson trailblazer, leaders tied into freedom, but how, what they did also impacted the nation," museum manager Gwen Harmon said.

Department of Parks and Recreation Director Ison Harris invites the people for the Juneteenth celebration downtown from 7 p.m. to 9 p.m. in front of the convention center.

"We're actually going to have a celebration where we're going to bring out bouncy houses and some fun activities for kids to enjoy," he said. "When you start talking about independence, you think about fireworks, so for Juneteenth, we'll have a fireworks show (at nightfall).”