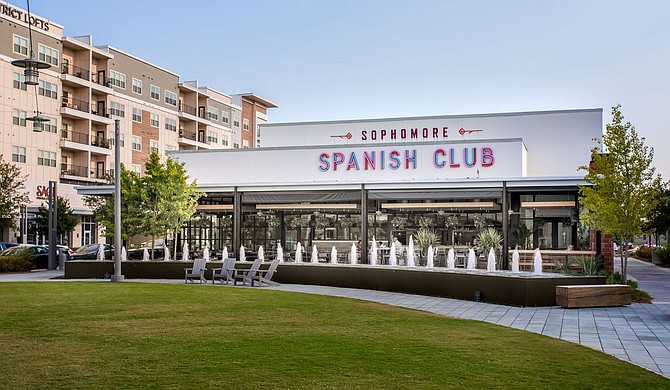 Sal and Mookie's New York Pizza and Ice Cream Joint, which opened in Jackson's Fondren neighborhood in April 2007, is moving to The District at Eastover after 14 years in business. Photo courtesy Jeff Good

Sal and Mookie's New York Pizza and Ice Cream Joint, which opened in Jackson's Fondren neighborhood in April 2007, is moving to The District at Eastover after 14 years in business. The building's lease expired in January 2021, and owner Jeff Good told the Jackson Free Press that he and fellow owner Dan Blumenthal felt it was time to move the longtime Fondren fixture into a new, larger location. Sal and Mookie's will occupy the space in The District that formerly housed Sophomore Spanish Club, which closed earlier this month.

"We were among the first restaurants that opened in the revitalized Fondren all those years ago, along with the likes of Walker's and Brent's," Good says. "We wanted to be able to engage with the tri-county area and bring families into the neighborhood, and we've had a great run there these past 14 years. With the lease running out we decided we should think about what is next for us, especially as we deal with everything in the midst of the pandemic. Now that we have the opportunity to expand in The District, we decided we should take it."

The restaurant's move is set to take place in early April. Sal and Mookie’s will continue to operate in its current location on Taylor Street in Fondren until the end of March. New amenities for The District location of Sal and Mookie's will include curbside pickup, a walk-up outdoor ice cream service, morning coffee service, private dining rooms and special events on the new building's patio. With a larger location and access to The District's outdoor green space, Good says Sal and Mookie's will also be able to revive its Children's Carnival event, which the restaurant hasn't held since the green space near the Taylor Street location became the site of Hope Lodge.

Hops and Habanas, a beer and cigar store that has been in business for more than 12 years, closed its doors earlier this month following an auction of many items and fixtures in the shop. Owners Rick and Trayce Miles announced on their Instagram page that Fondren Guitars will move into the building.

The Miles posted a farewell message to Fondren and their customers on the Hops and Habanas Facebook page.

Trayce and I opened Hops and Habanas on Feb. 1, 2009, in Madison. A truly new retail concept at the time which proved to be successful. We opened the Fondren location in 2014 and created a Jackson destination spot.

We have truly enjoyed growing our business concept which has been modeled by others throughout the state. We have certainly had our fun, enjoyed serving our customers and developed many, many lasting friendships.

We made the decision that we wanted to retire from the retail business last fall. Since then we have been in discussions with multiple parties over the following months concerning the sale of the business or building. We did not find a party to continue the business and subsequently have sold the property.

December is our last month that we will be providing full retail sales. It is difficult to be stepping away from a business we have put so much time and energy in over the past 12 years and has become beloved by so many. But without getting into details, there (are) just other things we would like to do more at this point in our lives.

So come see us while the doors are still open. We are putting price tags on fixtures for sale, and equipment and remaining inventory will go on sale after Christmas.

We wish you all a Happy Holiday Season!

Jackson-based William Winter Institute for Racial Reconciliation is hosting a virtual day of discussions and artistic performances for the fifth-annual National Day of Racial Healing on Jan. 19. Participants can register for a Zoom link to join for any or all of the events.

The National Day of Racial Healing takes place on the Tuesday after Martin Luther King Jr. Day and aims to bridge racial divides to transform communities, a release from the William Winter Institute says. Nonprofit organizations, libraries and community groups in Los Angeles, New Orleans, Detroit, Washington, D.C., and other parts of Mississippi are hosting more than 40 events for the day.

Planned events for the afternoon include a presentation for the Mississippi Flag Commission and Black Lives Matter Mississippi to receive the inaugural Community Commitment Award, which recognizes local leaders for significant contributions to racial equity and community building inside and outside Mississippi, the release says. Jake McGraw, policy and civic engagement lead for the William Winter Institute, will facilitate a discussion titled "Now That Mississippi's Flag Has Changed, Will Anything Else?," and New Stage Theatre in Jackson will hold a pair of edutainment events featuring young performers from its troupe.

The William Winter Institute is hosting the day of virtual events in partnership with the W.K. Kellogg Foundation, the Maddox Foundation and HOPE Enterprise Corporation. The event is free, but participants must register via winterinstitute.org or bit.ly/WinterNDRH21 to receive a Zoom link by email.