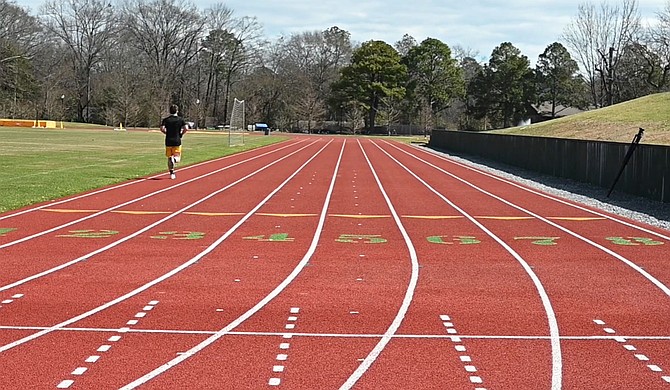 Belhaven University recently completed construction on a new eight-lane track and field complex. The track facility is located on the north side of the university's campus and extends from the Bitsy Irby building to Belhaven Lake.

The track has a synthetic all-weather running surface, similar to those used in Olympic track and field events, a release from Belhaven says. The university's Belhaven Blazers track team will be able to use the new facility to compete in 21 collegiate track and field events, including sprints, hurdles, steeplechase, middle and long-distance races, relays, long jump, triple jump, high jump and pole-vault. The Belhaven softball complex on Riverside Drive will host other field events such as discus, hammer and javelin throw, as well as decathlons and heptathlons.

Belhaven’s first official home track and field event will take place from April 16-17, during which it will host 5 or 6 schools from surrounding areas. The university is also hosting the American Southwest Conference championship from April 29 to May 1. For more information, visit belhaven.edu.

Jackson State University recently selected 15 students for its new Campus Energy Network, a career exploration program that aims to connect high-achieving college students with mentors from the energy sector. JSU announced the CEN program in partnership with the Center for Energy Workforce Development and the National Utilities Diversity Council.

The CEN program is part of a collaboration with the American Association of Blacks in Energy. JSU plans to use the program to help students engage with energy professionals from the Arkansas Electric Cooperative Corporation, Entergy and others to learn about industry career opportunities and professional development essentials such as networking, building a personal brand and navigating office etiquette.

CEN is one of three programs that CEWD and NUDC are conducting virtually on college campuses in 2021. For more information on CEN and other programs, visit GetIntoEnergy.com.

Faculty and staff from the University of Southern Mississippi's University Archives recently partnered with the Downtown Hattiesburg Association to produce window exhibits in honor of Black History Month. The exhibits are located in the front windows of the building that once housed the Kress Department Store on 500 N. Main St. in Hattiesburg, and will remain on display until the end of February.

The window exhibits images from the Mississippi Civil Rights Movement, political campaign memorabilia from Black Mississippians who sought elected office and material from the University Archives’ Oseola McCarty collection. McCarty was a Hattiesburg washerwoman and USM benefactor who donated her life’s savings to fund scholarships at the university.

Images on display in the first exhibit include depictions of grassroots activists Fannie Lou Hamer, Hartman Turnbow and Robert G. Clark among others, as well as citizens participating in “singing meetings” and court hearings. University Archives staff also used a poster from the recently donated Pendergrass Political Collection and digital prints from the Oseola McCarty collection.