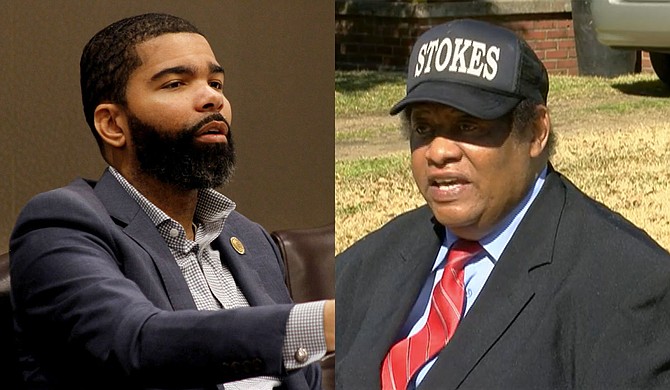 Mayor Chokwe A. Lumumba and Ward 3 Councilman Kenneth Stokes are at each other’s throats, trading accusations of incompetence in the midst of the water crisis in the city of Jackson. File photo by Stephen Wilson and Screenshot from WLBT

Amid a water crisis in the wake of a serious winter-weather storm, Mayor Chokwe A. Lumumba and Ward 3 Councilman Kenneth Stokes gave dueling statements during the week, trading accusations of negligence.

"Rookie mistakes of the mayor have proven costly to the city of Jackson, especially children, elderly, disabled and businesses," Stokes said Wednesday in an interview with WAPT. "The issue is senior citizens in this city without water. They couldn't even have water to flush toilets. You wouldn't want that for your mother, any of your loved ones."

Stokes said that the City's delay in providing tankers to supply water to Jacksonians still without water for over a week was the last straw for him and rejected the mayor's claim that he is spreading misinformation.

The sharp criticisms were in sharp contrast to Stokes’ past endorsement of Lumumba for mayor. Stokes was also close to and endorsed the mayor’s father, a former councilman and activist who died during his first term as mayor.

Lumumba gave a press conference Tuesday in an apparent broadside against Stokes’ earlier comments, defending his administration's effort at providing water for residents. He said what happened is an act of God and rejected the allegation of incompetence against him.

"The crisis that we are in the midst of was an act of God, not through incompetence, not through a failure to act from any individual, not from a failure to act from the administration," Lumumba said. "We offer as proof of the fact that this is an act of God is you just simply have to look at all of the places that this weather affected, and the fact that communities are experiencing the same trauma that our residents are experiencing today—Houston, Texas, Austin, Texas Canton, Mississippi, Vicksburg, Shreveport, Louisiana, and many more."

Stokes: Tankers ‘Not An Act of God’

Stokes, however, said that "the issue of tankers is not an act of God,” adding, “Let me say that because they tried to merge the cold weather and ice to tankers. Tankers could have been on the streets in Jackson long before."

In the Wednesday interview, Stokes picked holes in the mayor's claims. He said that if the city had a white mayor, people would have been marching the streets. He claimed that Lumumba initially rejected renting a tanker because he did not like the business person who has the tanker. He did not mention who this person is. He declined to mention his name after the reporter spoke with him on the phone. The mayor’s communication manager Michelle Atoa said she has no information in response to Stokes' comments.

"This mayor had an opportunity to do something, and he did not," Stokes said. "They had a businessman who had two tankers, (City Council President and Ward 6) Councilman (Aaron) Banks got one of them up, tried to get the city to pay, the mayor said I don't like him." Banks, however, declined to respond to questions from the Jackson Free Press concerning Stokes' claims.

"So that way the citizens, the older people especially, can't have water to flush their toilet! So Councilman Banks, at that point, was reaching out to get others to pay for it. At that point, the City said they were going to pay for one tanker.”

In his response, the mayor said Stokes does “things just to give the appearance of work.”

Stokes, a long-time member of the Jackson City Council (interrupted by a stint as a Hinds County supervisor) defended himself against the mayor's accusation that he is incompetent by saying that he has introduced more legislation and passed more resolutions than any other council members.

The mayor on Tuesday said all the political bickering is not helping as the city tries to recover from the weather and water crisis.

"I'm calling up to those individuals that we have to work with—our council people. It isn't helpful (that) we're in the midst of a crisis, and we make it a political discussion, or we make it a fight,” Lumumba said.

The mayor said that he has been in communication with the Mississippi Emergency Management Agency and other agencies for support. He has personally given out 10 pallets of water, he said, adding that his house has also been without water and understands how people feel.

"The failure to have tankers in certain locations was not due to a lack of recognition of the challenge as it was a lack of availability; there were no tankers available to us," he said. "We gave what we had; we gave what we could find."

Lumumba said that transportation problem caused by the winter storm made it difficult to get their tankers here and that it is very difficult for him to reach the Ward 3 councilman, an allegation Stokes did not deny, saying that he cannot sit and talk with the mayor.

"You do not sit and talk and play with a liar," Stokes said and leveled a litany of complaints against the mayor unrelated to the water crisis. The Ward 3 councilman is known for being hard to reach by telephone.

In a statement, Banks said, "At this time during the crisis of the majority of the city being without water, it is important that we all work together to come to the aid of our citizens."