Galey’s Pictures Prompt ‘Adventures in the Imagination’ at The MAX 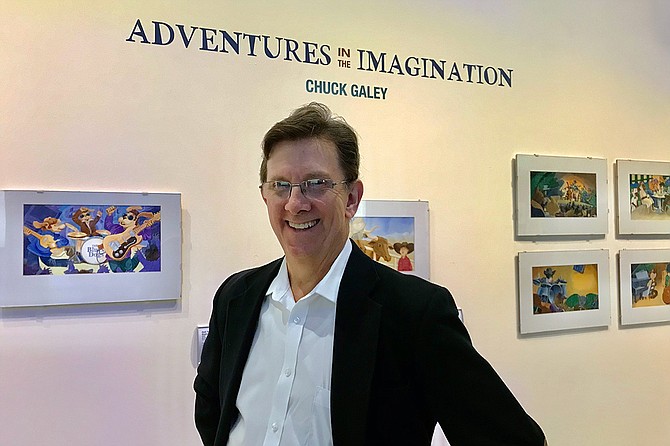 The exhibition “Adventures in the Imagination: Chuck Galey” is on view at the Mississippi Arts + Entertainment Experience (The MAX) in Meridian through March 12. Photo by Sherry Lucas

Even the standalone illustrations from Chuck Galey spark stories, igniting the imagination with a crackling warmth of character, narrative and action.

“Adventures in the Imagination: Chuck Galey,” a new exhibition available at The Music + Arts Experience (The MAX) in Meridian through March 12, puts a retrospective of the Jackson illustrator’s artwork on display. Its start, in particular, suits a storybook season often focused on children.

“They’re not like your pets at home. They dress nicely, these cats,” Galey quips.

Galey’s “Kenzi at Christmas” embraces the holiday as tightly as little Kenzi hugs her big gift with a smile so contented, it must be the perfect present for a loved one. Sprung from his sketchbook, Kenzi has evolved over the past two years, and may not be done yet. “It surprises me how much people love Kenzi,” her creator says of the little girl in holly leggings and a big red beret. “She’s going to be in a story, I’ve got a feeling.”

In a different illustration, a pup gaily pulls another little girl past a door by its leash. The next depicts a slouching, soda-slurping boy keeping pace with his own pooch, and heading toward mischief by the look of it.

“I think it’s fun,” MAX curator Stacey Peralta says of the show. “It’s an opportunity to spend time with a child in a setting you don’t automatically think of.” It’s an invitation, too, for viewers to bring their own experiences and imaginations into play, fleshing out plots for the pictures at hand.

For Galey, a career illustrator, working more kids into his drawings is a new direction that’s evoking more responses and helping connect his art with friends and viewers, as well as an art director in a portfolio review. “I’m beginning to do more and more of those,” Galey says.

His other artworks elicit smiles, too, such as the whale with a tiny top hat and a big bouquet, which Galey created after visiting Saltillo Elementary School and seeing a student’s sketch; a rat tricked out in buccaneer’s gear and charmingly titled “Cheesebeard the Pirate”; and “Gerboa, the Australian Mouse,” whose guitar-in-hand, hoedown stance practically sings a bluegrass song on the spot.

The exhibition’s illustrations include acrylic, watercolor/pen and ink, and digital works. “I’ve moved back toward traditional watercolor, because … clearly, they have more appeal; they have more spontaneity,” Galey says. “They have more light to them, more energy to them.

“The authenticity of the art and the connectivity need to exude off that page,” he says. His characters on the pages on display at The MAX—even those loose from their published tales—carry that intended appeal and energy with them.

At 67, with 37 years of freelance illustrating experience under his belt, Galey is now at work crafting his own manuscripts to submit. “I began to edit another person’s manuscript while laying out a book, because the pacing wasn’t right,” he says, chuckling. His next thought: “I can do this.” While learning to write has been a challenging journey for the trained artist, his goal is clear—he wants to be “a complete package.”

“The breakout book has not come along, yet,” he notes. But he’s staying on the path, writing and sending manuscripts off, getting “really good (constructive) rejections,” and learning more with each. “So, it’s all worthwhile,” he surmises. His Kenzi illustration took on a life of her own, he says, gathering plenty of unsolicited compliments. “There may be something there,” he has heard.

Born in Greenwood, Galey gamely credits the flat landscape of the Delta as a canvas that begged for additional visual interest. Long-winded Sunday sermons from his Baptist preacher, too, provided room for ideas to blossom onto the church bulletin his dad handed him, along with a pencil, to keep him quiet in church.

He graduated from Mississippi State University in 1978 and worked as an art director at ad agencies and a state agency before venturing out on his own as a freelance illustrator in 1985.

Children’s books, devoured along with his son, Sean (now grown), captivated him. “I remember when Sean was 4, reading bedtime stories, and he looked up at me and said, ‘Will I know words when I grow up?’” Galey heard something profound in that sweet sentiment. He’d tired of advertising and the short shelf life of his creations in that field.

“I guess I wanted to do something a little more worthwhile,” he says. “What could be better than to illustrate and write for children? To encourage them to enjoy reading, which would mean, hopefully, that they would become lifelong readers—which, in my opinion, make them better citizens.”

He’s illustrated more than 50 books for educational publishers around the country and created covers for Beverly Cleary’s “Ribsy” and “Henry Huggins” books, as well as R.L. Stine’s “Fear Street” series for Recorded Books Inc. Illustrating picture books remains his favorite project. Among his books is “A Special Visitor Comes to Possum Ridge” (Mississippi Department of Archives & History), in which he adapted and illustrated an original story that Elizabeth Coleman wrote. Galey is also on the Mississippi Arts Commission’s artist and teaching artist rosters.

Galey traces a line of influences that travels from England’s Edward Lear and Beatrix Potter, through Meridian-born Edgar Parker, who moved to New York to study, taught at the School of Visual Arts there, and created detailed, whimsical graphite illustrations as a writer and illustrator of children’s literature that also engaged adults.

Connect the dots to the anthropomorphic fun in a Galey character such as that jamboree-juiced gerboa. “You can see this connection between whimsy and humor and just the imagination that you pump into these characters,” he says.

At the exhibition opening at The MAX on Nov. 23, dozens gathered in support and appreciation of the illustrator. The Coleman Warner family sponsored the exhibition “In trying to support the cause of children’s literature, it excited me that the museum could connect with this artist and that field,” Warner, development director at The MAX, says.

Galey’s Greenwood roots and his links with Pelican Publishing of New Orleans and children’s literature resonated with Warner. His wife, Cindy, is a retired public-school teacher. They spent most of their careers in New Orleans and are new grandparents. Their granddaughter Savannah, who lives in New Orleans, is the special “jazz cat” referenced in the exhibition intro on The MAX’s website.

“I’m so glad they did this,” Ellen Ruffin says. Curator of the de Grummond Children’s Literature Collection at the University of Southern Mississippi and “a Chuck fan and friend,” Ruffin admires Galey’s changing color palettes, the characters and the “dreamy” quality in illustrations such as his “Wynken, Blynken & Nod,” based on a favorite nursery rhyme.

“What I love is that Chuck continues to grow,” Ruffin says. She stops at the city dog walk illustration, in which a little girl holds onto her small, excitable puppy’s leash, as the dog pulls her along as they move toward adventures yet to be detailed. “This tells a story,” she says. “He needs to develop that into a picture book.”

As part of the exhibition, Galey will lead a Book Illustration Workshop on Saturday, Dec. 4, at The MAX. Capacity is limited, and registration is required.

“Adventures in the Imagination” is available at the Mississippi Arts + Entertainment Experience (2155 Front St., Meridian), also known as the Max, until March 12, 2022. The Max is open from 9 a.m. to 5 p.m. from Tuesday through Saturday and is closed on Sundays and Mondays. General admission is $14; discount rates apply. For more information about tickets, visit msarts.org. To learn more about Chuck Galey and his illustrations, visit chuckgaley.com.