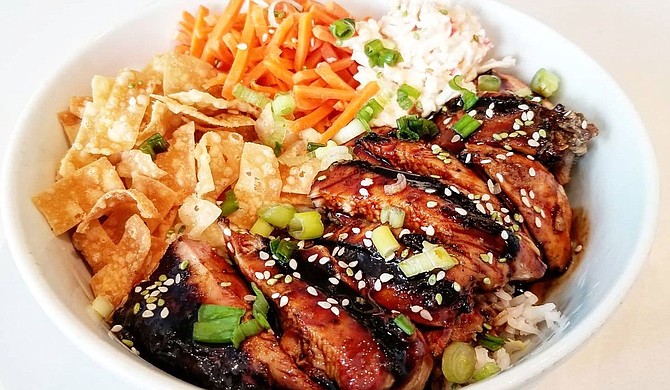 Poké Stop, a restaurant that California native Rachel Phuong Le originally opened in Cultivation Food Hall at the District at Eastover in Jackson, is set to reopen in Dogwood Festival Market in Flowood later this year. Photo courtesy Poké Stop

Poké Stop, a restaurant that California native Rachel Phuong Le originally opened in Cultivation Food Hall at the District at Eastover in Jackson, is set to reopen in Dogwood Festival Market in Flowood later this year.

The restaurant closed its Jackson location in May 2021, two years after its opening in January 2019. Le opened a second restaurant inside the food hall, Stuffed Asian Street Food, in September 2020, but it has also since closed.

Poké Stop allows guests to customize a sushi roll in a bowl, which is called a poké bowl. Patrons can choose from ingredients such as sauces of Le's own making, and both cooked and raw proteins. The Flowood Poké Stop will feature a larger menu for both bowls and rolls, as well as customizable sushi burritos and a larger selection of daily specials that the previous location lacked space for, Le says.

"I want the new Poké Stop to be a summer spot that everyone can go to," Le says. "We're going to have everything from Hawaiian shaved ice and retro arcade games to pinball machines to make this feel like a beach away from the beach and bring a bit of the California feel into Mississippi."

Le hopes to be able to open the restaurant by late September or early November and also has plans to open another new location in Jackson. For more information, visit pokestopjxn.com.

On Sept. 24, which would have been Kelly's 67th birthday, the museum will also host a runway show in Kelly's honor featuring Southern fashion designers who embody Kelly's beliefs and spirit, exhibit guest curator Raymond Banks says.

"Kelly was the first African American inducted into the Chambre Syndicale du Prêt-à-Porter, and he was always a man who designed for the people," Banks says. "Our exhibit contains at least 15 of his original designs and is dedicated to his work and his life here in Vicksburg and in Paris."

Both the exhibit and the runway show are free and open to the public. The Catfish Row Museum is open Tuesday through Saturday from 10 a.m. to 3 p.m. For more information, visit catfishrowmusuem.org.

The event will feature a Red Brick Brew beer brewing competition, a craft market, a talent competition, kids activities, a songwriter showcase and live music by Elliot Root, Strung Like a Horse, J & The Causeways, Sweet Crude and The New Respects.

Tickets are $15 for a Saturday pass, $20 for a weekend pass or $125 for a VIP pass, which includes access to a VIP tent near the stage, eight drink tickets, private light refreshments throughout the event, a swag bag with an official festival T-shirt and poster, private seating, early access to the Red Brick Brew tasting and more.

For more information or to purchase tickets, visit redbrickroads.com.