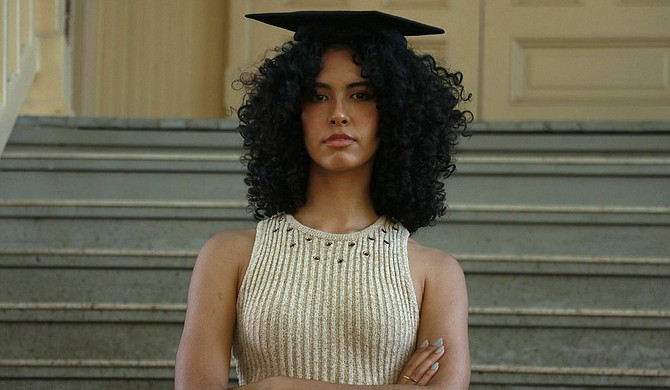 Marina Brito, a native of Sao Paulo, Brazil, and a member of the Jackson State University women's volleyball team, received a full scholarship in April to pursue a master's degree in business education at JSU this fall.

Brito developed a love of volleyball from an early age thanks in part to her father, Jorge Brito, a former professional player who now coaches the Philippines National Volleyball Team. Brito began playing competitively when she was 14 and traveled to Canada in 2015 to take part in USA Junior Olympic Volleyball, a national competitive volleyball network that provides training and playing opportunities for pre-college athletes. In 2017, when she was 19, Brito came to JSU to study economics and join the women's volleyball team.

"Economics interests me because I see it as a global profession, something that I could use wherever I am," Brito says. "It provides a broad spectrum of options and doors that you can open anywhere you end up. I think any kind of change begins with economics, whether it’s environmental impact and sustainability or helping industries move toward new energy sources."

During her freshman year at JSU in 2018, the women's volleyball team finished in eighth place out of 10 teams in the Southwestern Athletic Conference. While the team eventually won the 2021 SWAC tournament against the University of Arkansas Pine Bluff in March, the COVID-19 pandemic made the path there a difficult one, Brito says.

"When the pandemic first hit the school issued a notice saying that online classes required students to move back home," Brito says. "The season got cancelled, and I was here unsure of what was going to happen at first. I ended up going back to Sao Paulo for five months, and when I came back I needed to quarantine in Mexico for a time before I could re-enter the United States. The whole time there was always a doubt in my mind about whether I'd be allowed back in, but ultimately everything worked out."

Brito returned to Brazil in August 2020. That fall, she had to adapt to learning virtually in a different time zone from the U.S., which sometimes required her to be awake at 2 a.m. for online classes since they were often the only time slots available. Despite the difficulties, she ultimately passed the semester with a 3.9 GPA.

During quarantine, Brito also had to adapt to both training away from gyms and keeping herself and her grandmother she lived with safe.

"I had to wait 15 days at first just to be able to see my grandmother, but I knew I needed to be kind and to not put her well-being at risk," Brito says. "She and my family were scared but happy that I was home. Fortunately for my training, my mother works in construction and would bring home leftover wood, stone and paint cans filled with concrete from construction sites to use for makeshift training equipment."