‘It’s Like a Little Landfill’: Fix Up Neighborhoods to Deter Dumping, Official Says 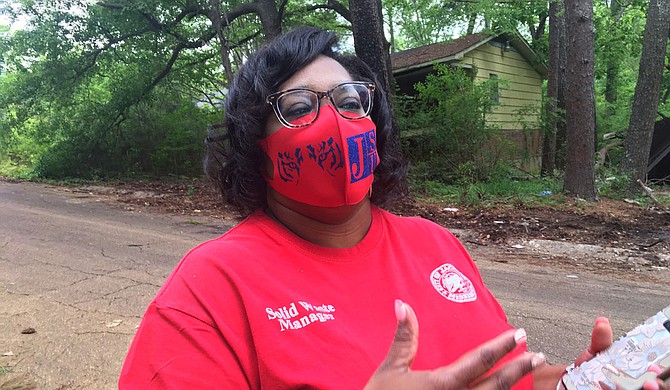 City of Jackson Solid Waste Division workers cleared illegal dumping on Glen Erin Street on Friday, April 16. City Council President and Ward 6 Councilman Aaron Banks, who stopped by the clean-up spot, said this is not the first time the crew has cleaned the street lined with six abandoned buildings.

"Glen Erin Street has been a street that has gone through this routinely, and it's been a cycle; the solid waste (division) comes out, they clean it up. Three days later, four days later, they're back dumping again," he told the Jackson Free Press during the clean-up.

Banks said being able to patrol and catch perpetrators by putting cameras in hotspots will make a difference. "I have had conversations with the mayor and police department on our dumping spots to make sure that we get the blue light cameras out so that we can monitor the area," he said. Cities are increasingly resorting to increased surveillance to address problems of illegal dumping.

"The biggest thing is when we're able to patrol and catch some of the actors, the bad actors that are doing this, it would make a big difference."

Solid Waste Division Supervisor Lakesha Weathers takes a more systemic approach. She said the long-term plan is to get the abandoned houses on Glen Erin Street torn down and the street beautified to deter illegal dumping.

"There's a lot of danger out here, even as you can see the mosquitoes that are out here, you have the rodents, you have rats, you have snakes. We're seeing sewage out here as well. And then anytime you have an area like this, of course, I'm sure it invites the criminal elements," she said.

Research indeed shows that dilapidated homes in neglected neighborhoods often attract crime and dumping, a problem that surveillance and increased policing may not address without efforts such as Weathers describes.

The supervisor said closing the road is an option, but when someone staying in the area complained that would make moving in and out of the neighborhood more taxing, she shelved the idea.

Weathers identified Bay Street, off Ridgeway Street, as another illegal dumping hotspot. It has a closed bridge and abandoned properties. "It's like a little landfill. Bay Street is one of those areas. That's another frequent dump area. We've cleaned Bay street several times. At one point, we had it blocked off, but we were told we had to remove that blockage because it was a fire hazard, so we can't block it,” she said.

She said patrolling may not work because it is difficult to catch someone in the act. "What we hope is that in bringing awareness to areas like this, that this deters illegal dumpers from coming to the area altogether."

Weathers said the crew will go to Hilda Drive next. "Because that's another illegal dumping area that they frequent," she said.

Banks: ‘Value This City Enough to Keep It Clean’

Because South Jackson now has a lot of vacant properties—resulting from white and economic flight since schools integrated in 1970—it attracts illegal dumpers, Weathers said. "I think that when you have a street with multiple vacant properties, that gives people the idea that these areas are abandoned. So then they come, and they do things like this on these streets."

She mentioned different waste disposal options available, including free rollout dumpster days. "We have free curb-it-don't-dump it (services). The other services are provided along with the garbage pickup that they already paid for," she said. "Our landfill in Byrum has some of the lowest rates in the area, so they have other options."

"A lot of stuff you see out here can be put to the curb with the regular household garbage."

Banks said he believes all the buildings on Glen Street have court cases, but the process takes time for demolition approval and contractors eventually tearing them down.

"Once it's declared a nuisance and the city council already voted on it, it has to go back before a judge. (After) the judge rules it, it goes out for bid. They bid on it, the City approves; the City then comes out and knocks it out,” Banks said.

"My message to the people of the city is to value this city enough to keep it clean. Jackson is one of the best places to live and if we want to have a safe city, (have) a good quality of life. Let's keep our city, let's be proud of where we stay to not illegally dump."