Bridging The Unemployment Gap, One Jacksonian At A Time 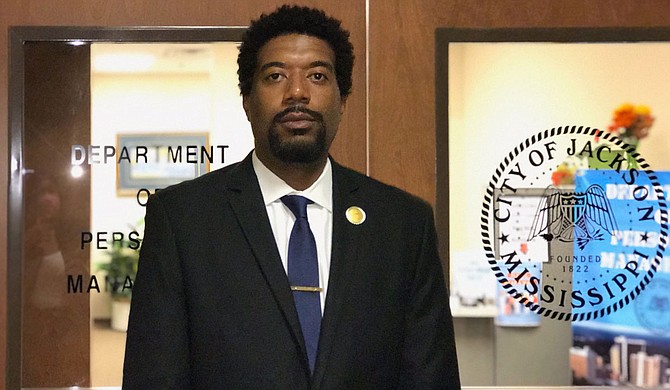 Jobs for Jacksonians Coordinator Jonathan Barnett has helped 3,000 people get jobs through the program. Now he has pivoted during the pandemic. Photo courtesy Jonathan Barnett

Jonathan Barnett is the pioneer and the only coordinator to date of Jobs for Jacksonians, the City of Jackson's program to connect the citizens with employment opportunities.

After Barnett's first eight years in the job and successfully helping thousands of people transition from unemployment to gainful employment, in March, he had to change the way he operates after the World Health Organization declared the COVID-19 a pandemic.

Barnett usually brings together about 100 companies for a yearly job fair. For example, on Sept. 30, 2015, at the Metrocenter Mall on Highway 80, more than 100 companies and organizations participated in the Jobs for Jacksonians fair.

The pandemic forced him to innovate. Rather than bring a mass of people to a place to meet numerous potential employers, he now targets hosting a company a week in what he calls recruiting sessions held at the Jackson Police Department Training Academy at 3000 Saint Charles St. The location satisfies the social distancing needed in the COVID-19 era.

"As a matter of fact, when it (pandemic) first hit the fan, earlier this year within the month of March and April, it was definitely an adjustment period," Barnett told the Jackson Free Press. "And once we got the (Centers for Disease Control) guidelines on how to ensure public safety, we knew how to roll the dice, so to speak."

"Now, every week, we do have a company that participates with our program because, number one, they want to participate because they have job openings," he added. "So we are in the position where we utilize the training academy where we have an ample amount of space."

Not more than 10 people, with temperature taken, are allowed at once into the training center.

"We have hand sanitizers, face masks, all of those things that we are required by the CDC guidelines," he said. "We adhere to those policies very strictly."

On Sept. 9, Hudspeth Regional Center held a recruiting session with Jobs for Jacksonians for those who want to become direct care professionals. The center, in Pearl, Miss., is one of the state's facilities for individuals with intellectual and developmental disabilities.

The weekly job recruitment session on Sept. 15 featured AutoZone, an auto-parts seller with headquarters in Memphis and five offices in Jackson.

"For the past few weeks, local recruiters for AutoZone have hired dozens of individuals through Jobs for Jacksonians," the mayor's Public Information Officer Meagan Gosa said in a release on the event. "In addition to this, the company is seeking to hire 80 more people throughout the Jackson area."

"Jobs for Jacksonians is an initiative created to provide accessible information to employment opportunities for Jackson residents," she said. "For job seekers, this program offers an array of services and training opportunities to assist them."

Barnett is happy with his collaboration with AutoZone, as with other companies, describing the Sept. 15 event as employment successes for dozens.

"As a matter of fact, AutoZone is getting ready to open up a new hub right on 1-55, north Jackson," he said. "We have helped secure between 30 to 40 jobs in a month for those guys there, and we are very proud of that. They are going to have their official opening in about a month."

Barnett describes what he does as a workforce and economic development initiative, leveraging partnerships with the business community to bridge the employment gap.

Barnett wants to have job fairs lined up through the end of the year. He says companies contact him to help them get the people they need to fit into their different positions.

"Services that we do provide for individuals are resume writing, interview preparation, job search navigation, online job search and application, contact referral," he said. "I have a lot of contacts with (human resources) managers and directors of different businesses."

He touts his ability to get the applicants to meet directly with different companies' human-resource managers.

"I put people in places and positions where they can meet managers face-to-face," Barnett said. "We are in a lot of situations where human resources managers (can't) meet applicants because they are (busy). So I am able to (get) in a position where I can be a liaison for the job seeker to the decision-makers."

He does his work so well that the human-resources managers he deals with wonders if he is earning extra.

"A lot of HR managers, once I exceed their expectations, they ask me, 'do you make extra money from this?' I say, 'no, I am paid by the taxpayers of the City of Jackson,'" Barnett said.

He enjoys the freedom of doing the job as a service to the people.

"Our hands aren't tied, for example, by those kinds of (money) conversations, so it's pretty much very cut and dry," he said. "If I have to bring people to (different industries like) Continental Tires, that is a win-win for everybody."

"At the end of the day, if we help our citizens of Jackson get employment, good healthy employment, it is helpful for the city at large. It is one person less (depending on government) benefits, that is one person getting a 401k plan," Barnett explained. "That's how we roll right there. Every week our goal is to have one premier company."

From Prison to Public Works

New Way Mississippi, a nonprofit founded in 1998 focused on providing re-entry services to the formerly incarcerated, started working on job placement with Jobs for Jacksonians this year. They now have eight people who have successfully transitioned to working for the City's Department of Public Works.

"I am proud to have that partnership, and it really makes me feel good about the clients and that they have been afforded the opportunity to be successful," Perry said in a phone interview.

Though 95% of those they serve, through their relationship with the Mississippi Department of Corrections, are ex-prisoners, others are the homeless, recovering addicts and alcoholics. The ministry's office is at 6510 Cole Road in Ridgeland.

"When they have men and women that are being released and don't have anywhere to go to call home, what we do is we give them the benefit of transitional housing for up to six months," Perry said.

"But the whole objective is to make sure that we give the ex-offender the opportunity to have the full service that they need in order to be successful and not go back to the prison system. They can reconnect with their family and be productive citizens in our community."

"I am just proud of that opportunity and the partnership with the mayor and the City of Jackson," Perry added. "I think it's going to go great places as we continue to build that relationship. I am excited about it."

The Jobs for Jacksonians coordinator said that with the strategy of hosting one company at a time this year, applicants would have a clear understanding of why they are there.

"What that means is, for example, we have AutoZone, Yates Services, Brown Bottling Group," he said. "When the public knows about that one company, they know what they are getting themselves into. In other words, we've been more—I will dare use the words—surgical and strategic in identifying job openings."

Plans include hosting Brown Bottling Group, the Ridgeland-based Pepsi Cola and Dr. Pepper Beverages distributor, on Sept. 30 at the Jackson Police Department, and Ingalls Shipbuilding, a shipyard located in Pascagoula, in October.

"On Wednesday, October 7, we will be having a virtual job fair—this is something new that we are doing here too— with Ingalls Shipbuilding off the coast," he added. "They are one of the largest employers in the state of Mississippi."

A few months ago, the organization hosted a job fair for the City's Parks and Recreation department to fill job openings. Isaiah Golden, 32, was a participant who benefited from the event.

Golden, who holds an associate degree from Hinds Community College, described the experience with Jobs for Jacksonians as great for him. He started working for the City government last month as a golf-course attendant.

"I went to one of the job fairs they had, and I filled out the application," he said. "(What I make now) is more than what I was making in my last job."

Barnett says the people he helps get job ranges from those with GED to Ph.D., and from entry-level jobs to managerial level, with varying skills.

"The spectrum is across the board on what I service to the private sector," he said. "For example, it does not matter if it is one of the largest companies in the state—like I help companies with their workforce development needs all the way from Ingalls Shipbuilding to a mom-and-pop store in west Jackson."

He said that different companies offer different pay scales for the various openings they want to fill.

"Like in AutoZone, they have managerial positions; they have delivery driver positions, they have sales positions," Barnett said. "Like with Yates Services, that's pretty much assembly line work, (but) also managerial works."

"It depends on if the person has the particular certification to do more of a technical kind of work," he added. "It could be that someone can get paid $12 an hour or over $20 an hour. It just depends on the job title (or) position, and the amount of skill set that person may acquire or possess, and the work experience that the person may have.

"This is one of the premier workforce development programs that we gave here in Mississippi—Jobs for Jacksonians."