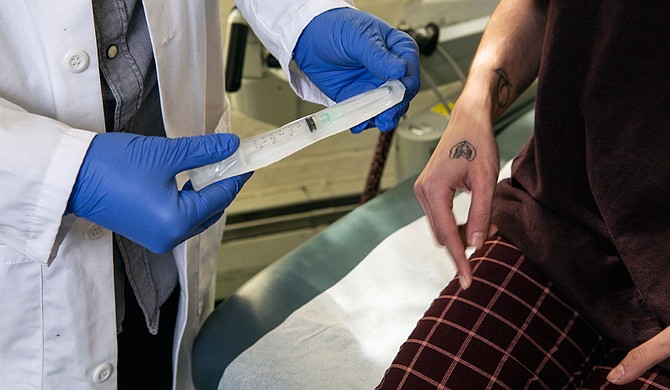 When Gulf Coast native Stacie Pace decided to open her own clinic, the nurse practitioner carefully considered one question: Whose healthcare needs were not being met? The answer, she concluded, was transgender people in Mississippi, who are estimated to number around 15,000. Photo courtesy The Gender Spectrum Collection

HATTIESBURG, Miss. (AP) — When Gulf Coast native Stacie Pace decided to open her own clinic, the nurse practitioner carefully considered one question: Whose healthcare needs were not being met?

The answer, she concluded, was transgender people in Mississippi, who are estimated to number around 15,000.

Nationwide, nearly 20% of trans people say they’ve been denied access to healthcare because they are trans. And in a state with only one medical facility consistently offering hormone therapy, one healthcare need stood out to Pace.

“The hardest thing for trans people to get access to is hormones,” she said. “Here and there you’ll find a primary care or endocrinologist that does it, but they don’t advertise it. They usually don’t take very many of those patients because they don’t want to be seen as the ‘trans provider’ and build up that reputation.”

Pace, on the other hand, very much does want to build up that reputation. She opened the Other Clinic, a telemedicine clinic with an office in Hattiesburg, last November. As far as she is aware, her clinic is the only facility in the state to exclusively offer hormone therapy, exclusively for transgender and nonbinary individuals.

Before Pace’s clinic opened, the closest and most reliable options for hormone therapy for people on the Mississippi Coast were in New Orleans and Mobile. Pace, who grew up mostly in Biloxi, estimates a third of her patients live on the Coast.

Pace’s clinic is a sign of hope in a state where access to even basic medical care for trans people can be fraught, LGBTQ activists and community advocates say.

‘I’M ASKING FOR A FLU SHOT’

Petra Ehlers, a transgender woman who moved to Biloxi in 2005, said she called more than 20 primary care doctors before finding one that treated trans patients.

“I’ve been told, ‘I don’t deal with trans care,’” Ehlers said, “And I’m like, ’I’m not asking you for trans care, testosterone blockers, I’m asking for like a flu shot. And they would still say no. Some doctors wouldn’t even give a reason.”

Discrimination against trans people by healthcare providers is technically illegal under the Affordable Care Act. But it’s still widespread, and the Trump administration has sought to roll back anti-discrimination protections for trans people.

Molly Kester, a trans woman who is vice president of the Gulf Coast Equality Council, draws a distinction between basic medical care and what she calls “the trans part of transgender healthcare” — care related specifically to the process of transitioning, in which hormone therapy can play an important role.

“For most trans people, hormone therapy is as much about getting the inside, your mental health, straightened out as it is about your physical changes,” Kester said. “It stabilizes who you are with you are. It’s hard to explain until you go through the process. You feel at peace when you get on the right hormones. You’re not having that internal struggle.”

In 2019, there was only one provider in the state that openly advertised that service: Open Arms in Jackson. A report compiling legal and medical resources for trans people in the South, published that year by the Campaign for Southern Equality, found that only West Virginia had similarly limited options.

For six years, at least twice a year, Kester has made the drive to Mobile to see the doctor who provides her hormone therapy.

In a state where openly providing trans-specific healthcare can bring harassment and threats, Pace said, trans people have long relied on word of mouth and social media groups to exchange information on where to get respectful care.

By advertising, Pace has opened herself up to backlash. On her phone, she has a few screenshots saved, documenting the threats and transphobic comments on her clinic’s Facebook page. She doesn’t publish the address of the office where she sees a few clients in person, because she worries that someone could decide to come burn it down.

But going public has also triggered a wave of support, some of which came as a surprise to Pace. Local college students have messaged her asking if she needs volunteers to sweep the floors. Someone donated a potted tree to brighten up her office. And one man got in touch to say that if she ever needed a front-end loader, he would be happy to help.

“So if I had to move a whole bunch of dirt, that would definitely be a choice,” Pace said. “People reach out and offer whatever they can. It helps reinforce that what I am doing is right.”

Catherine Jones, a therapist in Gulfport who specializes in working with trans patients, said that before Pace’s clinic opened, she referred her patients to a clinic in New Orleans for hormone therapy — she didn’t know of anyone in-state offering it.

Jones was thrilled to learn about the Other Clinic last year, and to find out it offers telemedicine, which makes it convenient for her patients on the Coast.

“Whenever I was sending my clients to New Orleans, I didn’t really have a relationship where I felt like I could ask them questions and we could go back and forth,” Jones said. “With Stacie, I feel like we’ve built a little bit of a rapport. I’m super comfortable sending my clients to her and asking questions.”

As a highly public node in the whisper network of resources for trans healthcare, Pace has also become a clearinghouse for all kinds of useful information for trans Mississippians.

Rhiannon Owens is a trans woman and president of the Gulfport branch of the national organization PFLAG, a support group for friends and family members of LGBTQ people. She not a patient of Pace’s, but they’ve exchanged messages about trans resources. Owens recently asked if Pace could recommend an electrolysis provider in the state who serves trans clients. Pace immediately suggested three or four options.

Owens said PFLAG and the Gulf Coast Equality Council are critical sources of information for trans people on the Coast.

“Stacie’s clinic is now going to be another one in that fold, where we go, ‘Who do we know that we can refer people to that is safe and nonjudgmental?’” Owens said.

For younger trans Mississippians, Pace’s clinic is a sign that things are changing, slowly, in their state.

Max Fritz, a student at Ocean Springs High School, said his parents and community have largely been supportive since he came out as trans a few years ago. But the state makes it difficult to change the gender marker on his birth certificate, so his driving learner’s permit says female.

“Seeing that on a legal document that’s supposed to be mine makes me feel kind of alienated,” he said.

Fritz is a few years too young to become a patient of Pace’s, since she is certified to treat only people who are 18 and older. But he and his mother, Tina Fritz, said it was reassuring to see their state gaining more options.

“There is always hopeful thinking that care will always be close to where someone lives, so I think this is a good first step,” Max Fritz said.