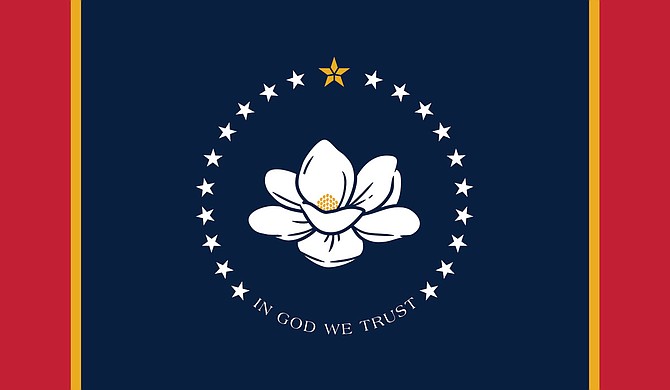 The Mississippi Flag Commission completed its task of providing Mississippians with a flag to vote on in November, elevating the New Magnolia design over the Great River shield flag. Photo courtesy MDAH

The state is one step closer to a new flag today, as the Mississippi Flag Commission settled on the New Magnolia design. The flag has a dark blue field emblazoned with a magnolia flower, encircled by 21 stars and the statute-mandated “In God We Trust” motto, between yellow and red bands. Mississippians will vote whether to accept the flag in November’s presidential election, with a simple majority vote making it the official new flag of Mississippi.

If the vote fails, however, the slate will be wiped clean, and the commission will return in 2021 to start the process anew. The only constant is the assurance that the flag can depict no Confederate imagery, whatever the ultimate design may be and however many votes it might take.

The vote comes just two months after the Legislature organized a key supermajority coalition to change the flag, suspending the rules late in the session and eliminating Mississippi’s old Confederate banner, which had flown since 1894.

The magnolia flag, now officially titled the “In God We Trust” flag, resoundingly defeated the Great River shield design in the commission’s vote by a margin of 8-1. Both flags survived multiple rounds of winnowing, after Mississippians submitted more than 3,000 designs for the commission’s consideration.

Ricky Vaughn, a graphic designer in Ackerman, Miss., is the primary designer of the commission’s selected flag. Sue Anna Joe, a Greenwood native, is responsible for the magnolia at the center of the flag.

Recent polls suggested popular opinion between the Magnolia and Great River Flag is split evenly. Today, Flag Commission member and Oxford Mayor Robyn Tannehill suggested waiting to decide between the two flags for a final polling of registered voters, but her fellow commissioner, Mississippi Department of Archives and History Director Katie Blount, explained that absentee-voting requirements demanded a final decision be made today.

After announcing the results, former Mississippi Supreme Court Justice Reuben Anderson, the commission's chairman, gave a speech thanking the 3,000 people who submitted flag designs, as well as the 75,000 who voted. Anderson took a moment to reflect upon Mississippi's historical struggles.

"I grew up in Mississippi in the 40s and the 50s, and all of my life Mississippi has been at the bottom, 50th, in whatever category you can think of: whether income, healthcare, education ... we've always been on the bottom. On Nov. 3rd I think that will take a change. We won't move to the top, but I can assure you we will move."

Anderson extolled the virtues of Mississippi, saying that the state would "ascend" in the wake of the flag change, a flag he said represented Mississippi's future, instead of its past.

"How in the world is it that Mississippi could be on the bottom with all of the tremendous assets and resources that we have? We have the greatest people, the most talented and gifted people, the greatest poets and authors and musicians. We are the birthplace of America's music. We have the most fertile soil. Anything will grow in Mississippi, from cotton, to watermelon, to catfish. It'll grow here. We have timber, and oil and gas, the Mississippi River and 90 miles of beaches. There's no reason for us to be on the bottom. We'll be on the bottom for all of my lifetime, but my children and grandchildren will see us ascend. And it'll happen because of what you have done to bring this great object to the people of Mississippi to vote on," Anderson said.