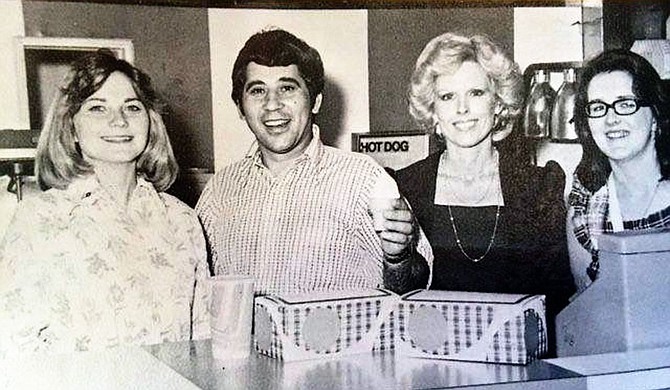 Vasilios "Bill" Konstantinos Matheos, owner of Bill's Greek Tavern in Jackson and a man many in the city knew and referred to as "God Bless America" for his habit of shouting the phrase to each customer who entered his restaurant, passed away in his home on Oct. 11 at age 85.

Matheos was born on the island of Thassos, Greece, in the Aegean Sea. His father was a fisherman and his mother was a celebrated cook in his family's small village who instilled a love of traditional Greek cooking in Matheos from an early age.

His life was filled with travel and adventure, which started from an early age, his wife Judy Matheos and grandson Nicholas Sanford told the Jackson Free Press.

"My grandfather liked to tell me the story about how when he was 6 years old his father wanted him to feed their donkeys, but he wanted to play soccer with his friends instead," Sanford says. "One day he didn't feed them and had planned to wake up early the next morning to do it, but his father found out and apparently he and some of his friends tried to build a raft and leave Greece after that. They didn't make it far because they didn't bring any water and the coast guard ended up stopping them, but he said it was the first time he tried something crazy like that."

When he was 14, Matheos ran away from home and found work repairing ships. At 17, he joined the Greek Navy and went on to serve as a cook for three years. After he left the navy he spent roughly five years traveling the world while working on boats before he decided to try to find a way to immigrate to America. Starting in 1963, he spent the next five years attempting to enter America by jumping off ships and swimming to shore on three separate occasions in New York, Baton Rouge, La., and Galveston Texas, but got deported back to Greece within weeks each time.

He finally found success in Houston, Texas, where he worked as a bartender and managed to get a 90-day visa in 1968, during which time he planned to get married to get a Green Card and started looking for a wife. He found success when he met and later married Judy Harrison, and the two remained married for 52 years until his passing.


"I remember after I met Bill, I took him to Mississippi to meet my family at my home in McComb, and my family initially thought he was a member of the mafia because he didn't speak much English," Judy Matheos recalls.

Matheos started his first restaurant, Mr. Char Burger, in Houston together with one of his friends. He also opened Humpty Dumpty and Texas Coffee Shop. While Matheos was not, in fact, part of the mafia, it turned out his friend apparently was, and one day an unknown person dropped a suitcase containing $10,000 on Matheos' front door, Sanford says.

"My grandpa found out that the money was from someone who wanted him to open a restaurant for them," Sanford says. "He apparently considered it, but when another friend said that if he opened a mafia restaurant and got tied up with them he'd be in it for the rest of his life, he thought better of it. He and my grandma decided to get out of Houston after that and moved to Jackson to open their own restaurant called Belmont Cafe."

In 1972, Matheos opened a new restaurant in Jackson called Bill's Burger House, but he eventually grew tired of flipping burgers and instead started serving traditional Greek cuisine and changed the restaurant's name to Bill's Greek Tavern. The restaurant remained open for 45 years until chronic illness forced Matheos to close it in 2017. While it was open, Bill's Greek Tavern was a beloved Jackson staple that came to the favor of famous Mississippi literary figures such as Willie Morris and Eudora Welty.

"Bill would get up early in the morning to prepare beans, vegetables, fresh fish, homemade onion rings and breaded steaks," Judy Matheos says. "He loved taking care of food, and his philosophy was that if he wouldn't eat it, he wouldn't serve it. He would play Greek music in the restaurant all day and even dance to it, and he'd call out Greek greetings like 'Opa! Opa!' and shout 'God Bless America!’ to every one of his customers."

Matheos enjoyed playing soccer with other members of the Greek community in Jackson at a field that was once next to the restaurant, which has since become a parking lot. He also used to speak about Greece to students at the request of Jackson State University. Students would pick him up and get ready early so Matheos could be back at the restaurant by 11 a.m. for lunch, Sanford says, and he always invited the students to come to dinner at night to taste the food he spoke to them about.

"Bill was always nice and jovial, loved everybody and wanted to share his blessings with everyone," Judy Matheos says. "He was a hard worker who mostly stuck to his cafe, but he would give you the clothes off his back."