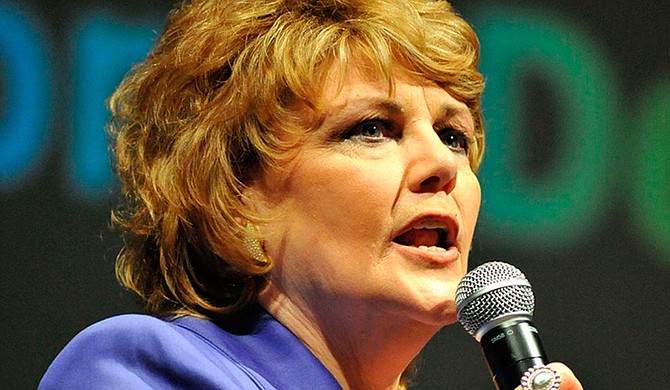 Madison Mayor Mary Hawkins Butler on Tuesday challenged the petition process that put one of two medical marijuana proposals on the statewide ballot, arguing that the number of signatures gathered does not meet standards set in the state constitution. Photo courtesy MHB4 Auditor

JACKSON, Miss. (AP) — A Mississippi mayor on Tuesday challenged the petition process that put one of two medical marijuana proposals on the statewide ballot, arguing that the number of signatures gathered does not meet standards set in the state constitution.

Madison Mayor Mary Hawkins Butler filed papers with the state Supreme Court one week before the Nov. 3 general election, more than a month after the start of absentee voting in Mississippi and several months after the secretary of state's office said the initiative qualified for the ballot.

Supporters of Initiative 65 said their petition process met the requirements set by the constitution and by a 2009 attorney general's opinion. They also accused Butler and the city of Madison of trying to undermine the initiative.

“The Secretary of State properly qualified Initiative 65 under the same constitutional procedures used for every other successful voter initiative,” Jamie Grantham, spokeswoman for Mississippians for Compassionate Care, said in a statement. “The lawsuit from the City of Madison is meritless.”

The Mississippi initiative process requires petitioners to gather signatures from registered voters, getting no more than one-fifth of the signatures from any congressional district.

In papers filed Tuesday with the state Supreme Court, Butler argued it's “a mathematical certainty” that more than one-fifth of the signatures for Initiative 65 came from at least one of the four congressional districts.

In a legal opinion dealing with initiatives, the Mississippi attorney general’s office said in 2009 that the secretary of state should require an equal number of signatures from each of the five old congressional districts.

Butler argued that the secretary of state ignored the “plain language” of the constitution when he said Initiative 65 had qualified for the ballot. Delbert Hosemann was in his final months as secretary of state when the initiative petitions were submitted, and he became lieutenant governor in January.

Justice Leslie D. King on Tuesday ordered the current secretary of state, Michael Watson, to respond to Butler's lawsuit by Wednesday. During a news conference Tuesday, Watson declined to comment on the lawsuit. Hosemann, Watson and Butler are all Republicans.

Initiative 65 would allow patients to use medical marijuana to treat debilitating conditions, as certified by physicians.

An alternative measure that is also on the Mississippi ballot, Initiative 65A, also would allow patients with debilitating conditions to use medical marijuana, but it does not specify that those would have to be certified by physicians. It says the state would create a program based on “sound medical principles.”

More than 100,000 registered voters petitioned to put Initiative 65 on the ballot. The alternative was put there by legislators. Sponsors of the original initiative say the alternative is intended to cause confusion and kill the original.

There’s a two-step process for voting on 65 and 65A. The ballot first instructs people to “Vote for approval of either, or against both.” It then says, “And vote for one” — either 65 or 65A.

Watson has said that even if people vote against both initiatives on the first part, they can still vote for one of the proposals on the second part.