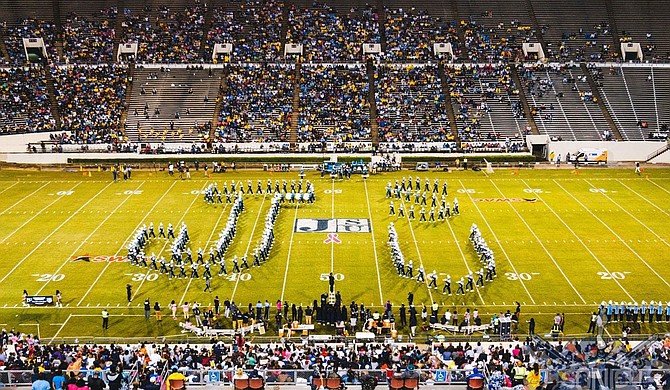 Jackson State University announced that its Sonic Boom of the South marching band is partnering with YouTube for a livestream event called “HBCU Homecoming 2020: Meet Me on the Yard.” Photo courtesy JSU

Jackson State University announced that its Sonic Boom of the South marching band is partnering with YouTube for a livestream event called “HBCU Homecoming 2020: Meet Me on the Yard.” The two-hour event is a collaboration with Jesse Collins Entertainment and Live Nation Urban.

“Meet Me on the Yard" will include celebrity guests, Greek step shows and a performance by the Sonic Boom, as well as content from students, alumni and YouTube creators. The purpose of the show is to celebrate the excellence of HBCU culture and its traditions, a release from JSU says.

The YouTube Original show is part of a series created from YouTube’s $100 million #YouTubeBlack Voices Fund. The show will raise funds for the United Negro College Fund, which will split proceeds with the Thurgood Marshall College Fund.

“Meet Me on the Yard” will take place on Saturday, Oct. 24, beginning at 8 p.m. For more information, visit jsums.edu.

Tougaloo College recently announced the establishment of a $4 million scholarship endowment in honor of former President Emerita Beverly Wade Hogan. Philanthropists and astronomers Julie Lutz and George Wallerstein donated the gift to create the scholarship, which Tougaloo said in a release is the single largest gift from an individual donor in the history of the college.

Hogan, 1973 Tougaloo alumna, served as the 13th president of Tougaloo College from 2002 until June 2019, when she retired. During her 17-year tenure, she worked to build a strong organizational infrastructure for the college. Tougaloo inducted her into the Tougaloo College National Alumni Association Hall of Fame in 2019 for her accomplishments and service to her alma mater.

Millsaps College recently announced that the Southern Athletic Association’s Council of Presidents voted to tentatively approve a modified schedule for Millsaps and all other conference-sponsored colleges, which would begin play in early 2021.

The SAA Council of Presidents also created an SAA COVID-19 Task Force committee that will create policies based on national and local health guidelines, social distancing, masking and coronavirus testing, a release from Millsaps says.

A confirmation of returning to play will take place in December after the Council of Presidents has reviewed recommendations by the SAA COVID-19 Task Force committee’s work.

For more information and a listing of tentative SAA schedules, visit saa.org.