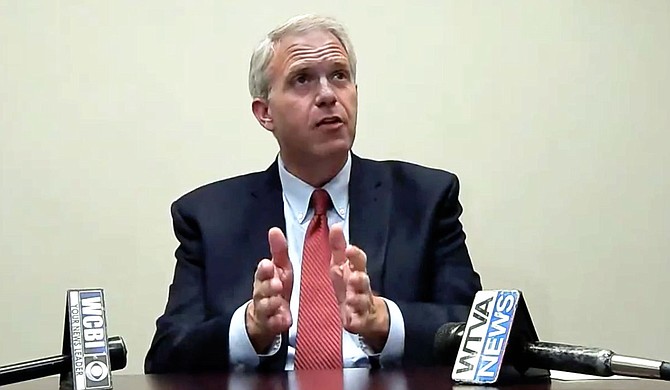 Telecommunications giant AT&T is challenging Northern District Public Services Commissioner Brandon Presley’s claims that it has a “pattern of submitting false data.” In an Oct. 7 letter to the Federal Communications Commission, AT&T called assertions that it had provided erroneous data to a federal entity about its broadband plans “unfounded.”

Cathy Carpino, AT&T’s assistant vice president and senior legal counsel, said in the letter to the FCC that AT&T “remains in compliance with its interim build milestones and will exceed its 100% build requirement by the end of this year.” She challenged the central assertions of Presley’s Sept. 29 request for an audit of the company’s Connect America Fund II, or CAF II project.

Presley recently asserted that AT&T had provided bad data after receiving hundreds of millions of dollars in federal funds to expand broadband services in Mississippi.

In his Sept. 29 letter to the FCC, Presley requested a full compliance audit of the telecom giant’s project to bring high-speed internet to 133,000 households and businesses in rural Mississippi, as part of CAF II. Presley and the PSC are seeking a comparison of data AT&T submitted to the Universal Service Administrative Company’s High Cost Universal Broadband, or USAC HUBB, detailing service availability, with Mississippi homes that have actually received high-speed internet access.

In an interview with the Jackson Free Press on Oct. 12, Presley called Carpino’s response a “spin job,” and laid out the complaints that spurred his investigation. “We have lists of people that have contacted us that were told by AT&T—through advertisement and other means—that they had internet service (available for installation) at their house as part of the build-out, paid for by federal aid, and yet when the technician gets there, (AT&T’s) own employees tell these people, ‘we’re sorry, you don’t have service,’” Presley wrote.

Carpino’s letter, however, said that “AT&T Mississippi provided the requested information and noted that the addresses on that list that it reported in USAC’s High Cost Universal Broadband (HUBB) portal represent 0.006 of the total locations AT&T Mississippi has reported in the HUBB and it will remove these locations from the HUBB before the end of the year.”

That number is a fraction, not a percentage. AT&T Director of Corporate Communications Jim Kimberly clarified the data in a statement to the Jackson Free Press, explaining that it equated to .6% of the entire list of over 133,000 households, not those that have actively sought the service. This is the equivalent of at least 798 instances of locations AT&T reported as covered under CAF II that are, in fact, inaccessible.

Presley called AT&T’s breakdown of the numbers “meaningless” without including how many households actually applied for the service in the first place.

“They claim to have 133,000 houses covered, right?” Presley told the Jackson Free Press. “That doesn’t mean 133,000 households have applied for service or are taking service. (Households applying) is where you find these addresses that are wrong. They come out to provide the service, and it’s not there.”

Presley’s argument is that if not all of the 133,000 supposedly internet service-accessible locations have applied for connection, the number of complaints about promised service that has not happened may represent a far greater percentage of the whole than AT&T suggested in its letter to the FCC.

In an Oct. 5 article for the conservative Y’all Politics blog, AT&T Mississippi President Mayo Flynt acknowledged that service availability did not perfectly translate to service adoption. “No matter the product, service, or provider, data shows that there is a sizeable gap between access to high-speed Internet and consumer adoption of those services,” he wrote.

CAF II received $283,780,000 of federal funds to provide internet service of at least 10 megabits download speed and one megabit upload speed to 133,000 locations across Mississippi. In both Carpino’s letter and a Sept. 14 statement to the Jackson Free Press, AT&T said it will meet and exceed that number by the end of the year.

Presley first raised the issue with a Sept. 11 subpoena to the telecom service provider, demanding detailed information on how many of the 133,000 locations have actually requested and received broadband internet service.

On Oct. 6, Kimberly provided the Jackson Free Press with the following statement on behalf of Mayo Flynt: “The data we report as part of Phase II of the Connect America Fund is already subject to strict audit and compliance measures by the federal government. We will continue to focus on doing work that matters to Mississippians by deploying high-speed infrastructure in communities across the state.”

Now, both Presley and AT&T await the FCC’s response, and whether the commission will force the transparency that the public service commissioner says is lacking.