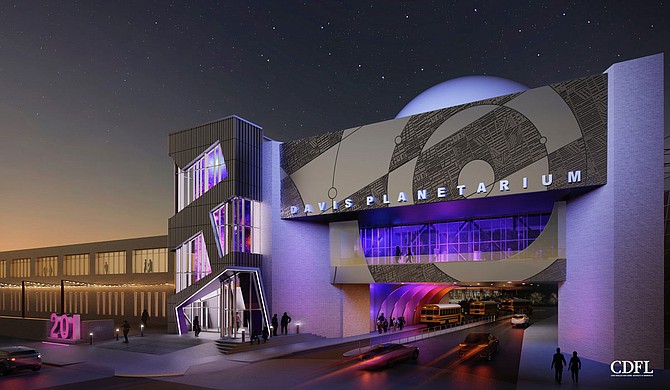 Jackson's Russell C. Davis Planetarium, which is currently undergoing a restoration due to a roof leak and resulting interior damage that forced it to close in April 2018, recently opened a page for crowdfunding to support the renovation effort.

The renovation is the first such effort that the City of Jackson has undertaken on the building in 40 years. The City plans to reopen the planetarium by April 2022.

Planned updates to the planetarium include a new reception area and common space, augmented reality exhibits and virtual reality spacewalks, a large video wall, an expanded gift shop, a lunar landing site exhibit and new programs and events such as a Virtual Summer Camp that teaches STEAM—science, technology, engineering, art and mathematics—subjects.

The planetarium's crowdfunding campaign allows for contributions of $10, $35, $60, $75, $125 and $350, each of which comes with successive tiered rewards and merchandise from the planetarium. Each higher tier reward includes all items from the lower tiers as well.

For $10, contributors receive five originally designed postcards printed on heavy cardstock with a gloss finish on the front and matte finish on the back. The $35 package adds a 14-inch by 15-inch natural canvas tote bag featuring a special abstract print. The $60 tier includes one of four limited edition Outer Limits graphic T-shirts featuring the constellations, planets, moon or warped time and perspective. The $75 package adds a Mission Control baseball cap with a custom RCDP embroidered logo. The $125 tier includes a 10-ounce Captured Planet metal camping mug available in white with a chrome top ring. The final, $350 reward tier allows donators to personalize a 1-inch by 3-inch nameplate with up to 50 characters to go on seats in the renovated Ronald McNair Auditorium.

For more information on renovation efforts for the planetarium or to donate to the crowdfunding effort, visit yourplanetarium.com.

The Hilton Garden Inn in downtown Jackson recently finished extensive renovations to its meeting and event space, guest rooms, restaurant and bar, lobby and fitness center. A Mississippi Landmark listed on the National Register of Historic Places, and

Formerly known as the King Edward Hotel, the building is listed on the National Register of Historic Places. Reopening as the Hilton Garden Inn in July 2020, the hotel contains meeting rooms capable of hosting groups of up to 300, which received new carpeting, lighting and window treatments as part of the renovations. The hotel's venue space also expanded to include a multi-function room on the ground floor.

King Edward Bar and Grille, the hotel’s bar and restaurant, upgraded its buffet area and added large screen televisions in the bar. The restaurant serves made-to-order breakfast, lunch and dinner, and a selection of craft cocktails, wine and beer.

The hotel also offers complimentary Wi-Fi throughout the property, 24-hour fitness and business centers, valet parking service, and an indoor pool and whirlpool.

In light of decreased revenues due to the ongoing COVID-19 pandemic, Visit Jackson and Downtown Jackson Partners recently partnered with Mississippi Delivery, a local company established in 2020 that supports local businesses, to negotiate a lower commission rate for Jackson restaurants to provide a low-cost restaurant delivery option on top of existing take out and curbside options. The program is available to restaurants in zip codes 39201, 39202, 39204, 39206, 39211, 39213 and 39216.