COVID-19: UMMC Expert on Emerging Knowledge of the Virus 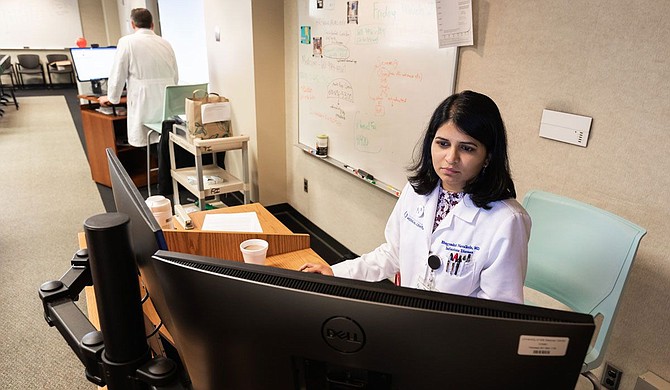 Dr. Bhagyashri Navalkele, medical director of infection prevention and control at the University of Mississippi Medical Center, was studying COVID-19 well before it arrived in Mississippi. She says our understanding of the virus--and how to prevent its transmission--has changed. Photo courtesy UMMC

In March, Dr. Bhagyashri Navalkele watched the crowds gathering on America’s beaches during spring break with a heavy weight on her shoulders. Mardi Gras came and went, crowds swelling in the French Quarter of New Orleans, and the consequences of that event and others were not lost on her two months after she began to prepare for the coming catastrophe.

“It was extremely concerning,” Navalkele said in a May 21 phone interview with the Jackson Free Press.

Navalkele is the medical director of infection prevention and control at the University of Mississippi Medical Center. By Christmas last year, the “virus of unknown origin” had caught her eye, then mostly contained in China’s Hubei province. 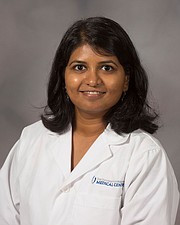 "Initially, the thought was it's going to be respiratory symptoms, something just like flu. But now that we have seen so many infections, it's clear that a multi-system organ infection can occur," Dr. Bhagyashri Navalkele says. Photo courtesy UMMC

It would not be long into 2020 before the gravity of the disease dawned on Navalkele. By the end of January, the UMMC staff was already anticipating what the crisis would look like when it finally hit the Magnolia State.

“On January 27, we started to do education for our employees and our staff ... providing them with what we knew about the virus so far, and what measures could prevent exposure,” Navalkele said.

In the time since, Navalkele and the rest of UMMC’s infectious diseases team have been working to understand the virus and how to arrest its spread across the state and the globe.

The most concerning development in the scientific understanding of COVID-19 is that the virus is far more complicated than the respiratory disease it initially presented as. “It can basically infect each and every organ system,” Navalkele said.

“Initially, the thought was it’s going to be respiratory symptoms, something just like flu,” Navalkele explained. “But now that we have seen so many infections, it’s clear that a multi-system organ infection can occur. You can have pneumonia. You can have a heart infection. There have been a lot of patients who have had their kidneys damaged … brain infection has occurred as well. It can be mild, moderate, severe, and it can be a fatal disease as well.”

Those complications are not limited to the immunocompromised and elderly. Just as with the classic examples of influenza pandemics, young and healthy individuals might be experiencing a paradoxically dangerous reaction to the virus: a cytokine storm, the term for an excessive response from the body’s immune system.

Others can suffer from multi-system inflammatory disease (MIS-C), a rare complication that may follow a pediatric COVID-19 infection.

State Health Officer Dr. Thomas Dobbs confirmed the first case of COVID-19 related MIS-C in Mississippi on May 19. The central Mississippi child affected was released from the hospital shortly afterward, and is expected to recover.

With a greater understanding of the way the novel coronavirus manifests comes a stronger awareness of what symptoms can herald an infection.

“Four months ago, it was fever, cough or shortness of breath,” Navalkele said. “But now the spectrum of symptoms have really changed. Basically anybody who might even have a headache, or certain other minor symptoms—it could be chills, it could be (muscle pain).”

No Evidence of Summer Drop

More worrisome is the emerging data on the environmental factors many thought would lead to a reduction in cases over the summer. Seasonal infections of the flu ebb with the summer heat, and initially many observers expected a drop-off in infections as the year progressed, potentially culminating in another rising curve in the fall.

For Mississippi, at least, May has brought no evidence of a vanishing disease: Instead, the virus spreads steadily with over 250 new cases a day, an extended plateau that Navalkele warns may continue even into the year’s hottest months.

“On a global level, we saw that the disease started in China and spread across the Northern and Southern hemisphere,” Navalkele said.

“So it gives the idea that it can spread irrespective of the season. Initially, the concern was that it’s going to be just during the winter season, then it’s going to die down. But the fact that it’s there in both hemispheres makes you wonder. It’s not really limited to any seasonality, but it’s more of the human-to-human transmission, which is playing a big role here.”

Dr. Chad J. Roy, a microbiologist at Tulane University, described an experiment on the novel coronavirus’ durability and infectiousness to Wired magazine. In the experiment, aerosolized particles of SARS-CoV-2, the coronavirus that causes the disease known as COVID-19, were rapidly spun in a “high velocity drum,” described as “a very stressful environment for pathogens.” The results of the experiment showed a significantly higher degree of survival for SARS-CoV-2 compared to previous epidemic-causing coronaviruses.

In the time of Spanish Influenza, in the early 20th century, the most devastating pandemic in modern history, the summer pause in the virus’ spread prefaced an apocalyptic return in the coming fall. But Navalkele is worried about a different spike that may arrive this fall: flu season.

“I’m really hoping for the best that we don’t see a change in the flu virus itself during the fall season,” Navalkele said. “... We see co-infections with COVID as well as flu. Just because you have the flu doesn’t mean you can’t get COVID or vice versa. So, this flu season, it’s going to be extremely important that everybody gets a flu vaccine, and as soon as possible.”

Navalkele warned that, even without a significant increase in the current rate of COVID-19 infections, a particularly virulent flu season paired with an ongoing coronavirus “plateau” could threaten the integrity of the state’s health-care system.

“Even if we are flat or plateaued, or even if we do see a surge, I think the flu season will play a part in causing a rising number of cases,” she said.

The continuing reopening of the country presents health experts and workers alike with a unique challenge: How can the nation return to business as usual without kickstarting another spike in infections and hospitalizations?

Navalkele, looking into the future, did not mince words. “Mississippians need to go out when it’s essential, when it’s absolutely necessary for them to go out,” she said. “It should be restricted to that—you need to do groceries, so you have to go to the grocery store. But otherwise, if they are able to avoid it, that needs to still be the first decision, to stay at home.”

As Mississippi reopens, understanding what kind of exposure spreads COVID-19 is key. Japan’s Ministry of Health, Labor and Welfare released guidelines summing up the areas of greatest danger for transmission. Closed spaces, especially those with poor ventilation, crowded areas, any large gathering, and close contact are the perfect vectors for the virus to spread. Unmasked and conversational interactions such as in restaurants and bars are especially dangerous.

A combination of all three of these factors represents an environment like the Shincheonji Church of Jesus gatherings, which were the cause of most South Korea cases, and should be avoided at all costs.

“There was a CDC article which came out (May 19). Church services open in Arkansas, with two people (attending) infected, and that resulted in (exposure) to 92 other people out of which around 36 people got infected, and three died,” Navalkele said.

Those factors are replicated in restaurants, now reopened across Mississippi with some guidelines. The Jackson Free Press asked Navalkele if it was safe to dine at restaurants. “Definitely not,” she replied without pause.

She cited “the closed space, the crowding—(viral spread) is not just through aerosols or droplets, but also through contact.”

Exposure is not as simple as coming into direct contact with the virus. An infected person sheds viral particles with every breath they take, but in most environments, a soft breath causes those infectious particles to fall quickly to the ground. Coughing, sneezing, but also speaking loudly could generate the aerosols and droplets necessary to spread the virus.

Hand sanitizer and hand-washing with soap for more than 20 seconds remains a critically important part of preventing the spread of COVID-19 as well.

Length of exposure is now believed to matter as well. Writing for The New York Times, Dr. Joshua D. Rabinowitz asserts that “stepping into an office building that once had someone with the coronavirus in it is not as dangerous as sitting next to that infected person for an hour-long train commute.”

Refined treatments for severe cases of COVID-19 are beginning to emerge, as well as a better understanding of how the virus spreads. At the same time, misinformation about the virus spreads on the internet and social media.

Early instructions for preventing the spread of COVID-19 focused on social distancing and hand hygiene, avoiding the clusters of infections around contaminated surfaces and large crowds. Navalkele believes those precautions are still critically important, but also stressed the value of masks in conjunction with those practices.

Myths about the dangers of masks—like the fear that they could cause health problems through the inhalation of the body’s exhaled carbon dioxide—have no basis in fact, she emphasizes. Medical professionals regularly wear masks for entire shifts without danger to themselves.

“It is safe to wear a mask. There should not be any concern regarding the oxygen and carbon-dioxide levels,” Navalkele said.

Hydroxychloroquine (HCQ), an anti-malaria drug President Trump touts—and now claims to take despite danger warnings—is not proven to have any significant effect so far, Navalkele said: “(HCQ) has not shown any improvement in clinical recovery or mortality. So that’s why it is not being promoted or CDC is not recommending to use hydroxychloroquine.”

Marc Rolph, executive director of communications at UMMC, disclosed that the university is currently involved in a multi-institutional trial of HCQ.

Regardless of its potential uses in a clinical setting, self-medication with HCQ is enormously dangerous, Navalkele said. A Lancet study of the drug released on May 22 revealed no benefits and significantly increased mortality rates for those who received it. “If there was ever hope for this drug, this is the death of it,” cardiologist Eric Topol told The Washington Post the day the study was released.

Navalkele is more hopeful about a drug called Remdesivir, an antiviral drug currently in clinical trials for use against COVID-19. Initial studies suggest the drug may shorten hospitalization for infected patients by several days, though Navalkele acknowledges more investigation is required.

Navalkele can do nothing to prevent the continued reopening of the state and its many gathering spots. But she urges Mississippians to take every precaution possible as they return to normalcy.

“It’s very important that we continue to maintain social distancing and try to avoid large gatherings,” Navalkele said. “Most of the transmission occurs in close contact settings. … The church services are reopening, the restaurants, barbershops … it needs to happen with extreme caution.”

State intern Julian Mills contributed to this report. Read the JFP’s full coverage of COVID-19 at jacksonfreepress.com/COVID19. You can email story tips to [email protected].