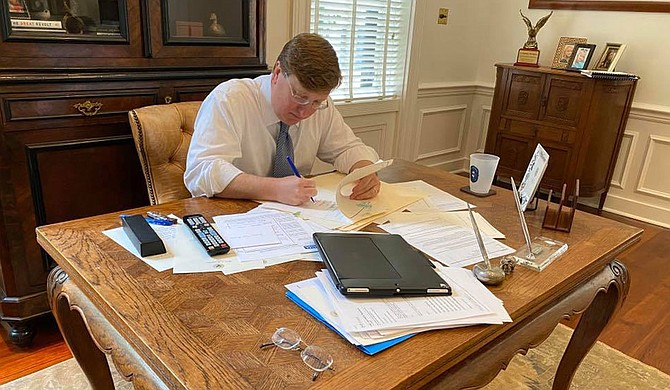 Tate Reeves should have known that lieutenant governor is a powerful position—he'd been Mississippi's "LG" for the eight years prior to this one. Photo courtesy State of Mississippi

As Gov. Tate Reeves learned this past week, the most powerful public office in Mississippi isn't actually that of governor. While Reeves has been on Facebook Live opening businesses ahead of the official guidance even from this White House, he ran into a brick wall when he decided the Legislature would have no say in spending $1.25 billion of CARES Act funds.

"Unity" was the declaration Reeves, Lt. Gov. Delbert Hosemann and House Majority Leader Philip Gunn made over the CARES Act money that Reeves thought he and what I call his "Country Club Cabinet" of campaign backers were going to have a free hand to spend.

Reeves should have known that lieutenant governor is a powerful position—he'd been Mississippi's "LG" for the eight years prior to this one. It's from that position that he pushed through corporate tax cuts, killed Internet tax collection, killed equal-pay laws for women, oversaw the passage of anti-LGBT legislation, created the "42A" amendment to shut down grassroots efforts to fund adequate education, tried to change education funding with a cynical per-pupil formula, expanded voucher programs by sneaking them into unrelated bills, and opposed Medicaid expansion for years.

Fast forward to the spring of 2020. With tens of thousands of people out of work, Mississippi's unemployment "infrastructure" seems to have largely failed. Even with Reeves trying to jettison the policies designed to slow people from getting benefits (suggesting their cynical roots) we at the JFP are getting persistent reports of people who filed legitimate claims weeks ago and still don't have money, much less the federal $600-a-week subsidy. So many people out of work means so many people without health-care coverage. Mississippi's much-maligned safety net is completely overwhelmed at a time when many of its citizens need it. Given the power of the LG, is there any one single Mississippian who, more than anyone else over the past decade, we could point to and say, "He's the guy?"

Mr. Reeves, Mississippi is your Pottery Barn. You broke it, you own it.

Let it sink in. Reeves chants his opposition to federally funded expansion of Medicaid in Mississippi so that the least among us could get a modicum of preventive health care, while rural hospitals could get something of a lifeline for funding and continued operations—you know, just in case a pandemic comes along.

But Reeves sets up a committee of campaign funders as quickly as you can say "let's meet in the men's locker room for a game of Texas Hold'em" and declares that they'll decide how to spend $1.25 billion of federal dollars. In private.

As New York Gov. Andrew Cuomo rightly pointed out in a public fight with Kentucky's Mitch McConnell, southern states are by-and-large "taker" states, getting more federal funding than our taxpayers pay in.

Mississippi is one of the biggest takers. And Tate Reeves is totally willing to take. For some reason, he just wants to make sure the benefits don't accrue to those who have it worse in our society.

Well, right now, a lot of Mississippians have it worse. And if there's anything that COVID is showing us in Mississippi, it's that "drown government in a bathtub" is an idea that conservatives need to let go. Government needs to save money in good times and spend it in bad. Government needs to be prepared for emergencies in tough times, and gracious to those in trouble during the good times.

Government also needs oversight, open meetings and accountability. As the Department of Human Services fiasco reminds us, when somebody like Tate Reeves, Phil Bryant or Donald Trump tells you "don't worry, I'll be the oversight," it's a good idea to have an auditor on speed dial.

Now that many of us are suddenly much more reliant or beholden to the government for subsidy or subsistence, it is the right moment to remember that the government is us.

Having an effective government that is "by the people" requires two things.

You have to participate. Sitting back and "consuming" government isn't an option—it's not like ordering from Amazon. Being an effective citizen means being informed, engaged and involved. Those who pine for the "good ole days" might also remember how business associations and chambers, youth groups, mentor groups and other civic organizations can help further active citizenship in this country.

You have to realize that "selfishness" and "self interest" are not the same thing. Wanting the government to pay for your kids to go to religious school is selfish; working to improve the quality of public schools for all of our children is in your self-interest. Worrying about whether or not "the other" is getting food stamps to feed their kids is selfish. Working to improve our social safety net for whenever one of us needs it is self-interest.

My hope is that Mississippi will come out of this crisis a more compassionate, efficient and effective state. To do that, we have to work together now to flatten the curve and save lives, and then we'll need to get our leaders to create a more effective safety net while investing in education, health care and access to good-paying, fair-paying jobs.

Our forefathers didn't create a "government-free" country. They created one with government of, by and for the people. The true American Experiment is the notion that a diversity of people could come together as one—e pluribus unum—to advance all of our interests together.

Now is a great opportunity to try it.