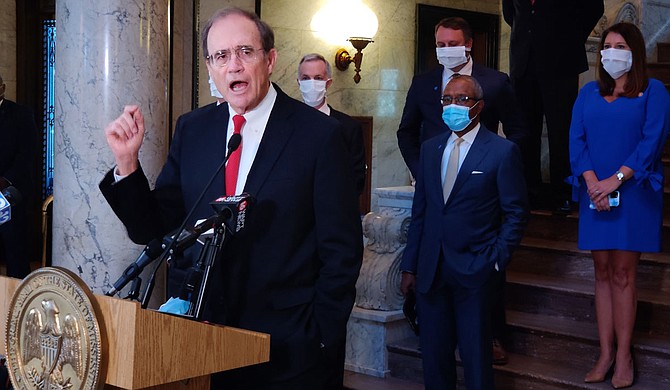 Flanked by lawmakers, Lt. Gov. Delbert Hosemann held a press conference Friday, May 1, detailing the Legislature’s belief that it oversees CARES Act appropriations, in opposition to Gov. Tate Reeve’s plan to use his emergency powers to control the funds. Photo by Nick Judin

Republican Lt. Gov. Delbert Hosemann and House Speaker Philip Gunn and a raft of legislators from both parties returned to the Capitol today to reassert legislative control over the purse strings of Mississippi, in direct conflict with Gov. Tate Reeves, also a Republican.

Gunn, joined by Senate Minority Leader Derrick Simmons, D-Greenville, and numerous other lawmakers, made the case that their check on gubernatorial power was bipartisan and rooted in the rule of law. "We're here in unity. The framers of the Constitution ... did not give us rule by one man. We reject the notion that government by the people cannot deal with emergencies,” the speaker said.

Together, Hosemann and Gunn laid out the legislative case for appropriations authority over the billion-plus in CARES Act funds the federal government gave to the State of Mississippi.

Gunn flatly rejected Gov. Tate Reeves’ claims that the Mississippi Emergency Management Law of 1972 provides him with the authority to spend relief money in times of emergency. "The governor may accept and receive funds. Nowhere in that statute does it say the governor can spend those funds," Gunn said.

Hosemann, for his part, stressed that no funds for critical emergency services were at risk of being delayed by Legislative oversight. “I have personally, repeatedly requested from the state agencies: do you need any money? What do you need right now? Similarly, the speaker has done the same. As I discussed with each of those agencies, they repeatedly told me, as recently as last night, that they did not need money immediately—that they needed reimbursement,” the lieutenant governor said.

Reeves: “I Don't Really Give a Damn Who Is in Charge of This Money’

Gov. Tate Reeves claimed the authority yesterday to appropriate $1.25 billion in federal CARES Act funds through “state statute which addresses all federal money in an emergency situation.” His determination to control the funds sets the stage for the first major crisis between the Republican governor and the Republican-controlled Legislature.

“I don't really give a damn who is in charge of this money,” Reeves said at his daily presser, insisting that his only priority was swift delivery of relief to Mississippians. “The bottom line is we can't allow politics and bureaucracy to cost Mississippians the money that they so badly need.”

Pressed by the Jackson Free Press on whether this meant he would be willing to relinquish the funds to the Legislature, however, Reeves quickly found a damn to give. “It is incredibly important that, in federal and state emergencies in disasters, we as the executive branch of government have to have the ability to do what a chief executive does, which is execute the laws that have been passed by the legislature,” he said.

Reeves then explained that one of those laws explicitly provides him with the power to appropriate emergency relief, and he intends to use it.

The governor’s interpretation of the law directly contradicts that of Lt. Gov. Delbert Hosemann, who told the Jackson Free Press in a Wednesday interview that “the Senate and the House will control what the money is to be spent on—whether there would be incentives, for example.” He added that “any statutory change would have to come from the Senate and the House. It cannot come from an unelected body,” Hosemann said, referring to the governor’s Restart Mississippi advisory board.

Hosemann can expect support from across the aisle when the Legislature reconvenes Friday, 1 p.m. Senate Minority Leader Derrick Simmons, D-Greenville, told the Jackson Free Press yesterday that conversations across party lines preceded the decision to return and lay claim to spending authority on CARES Act funds.

“I think it’s bipartisan that the $1.25 billion coming to the state of Mississippi should be managed by the Legislature. I don’t think the Legislature wants to give up its authority to appropriate funds,” he said in the interview.

Reeves avoided explicitly saying he would veto any attempts to change the emergency powers in Mississippi’s state law, but swore to “fight to get money to the people of Mississippi, as quickly as possible, the ones who absolutely need it, the 170,000 Mississippians who have lost their jobs, the small business owners, many of whom didn't get the (Paycheck Protection Program) because they didn't qualify.”

The governor warned of the dangers of challenging the statute that he says provides him the latitude to spend the relief money.

The governor declined to answer whether his Restart Mississippi advisory board’s deliberations would be sent through the Legislature, telling the Jackson Free Press only that “we are under the impression that we will be working with the Legislature to develop a plan long-term for these monies.”

Asked if the private nature of Restart Mississippi’s activities would mean it registers as a lobbyist organization, Reeves’ answer was simpler: “No.”