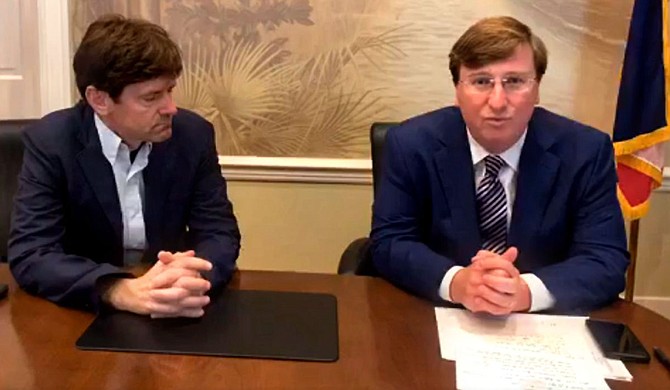 The Mississippi State Department of Health reports 847 cases of the novel coronavirus as of the morning of Monday, March 30. Mississippi State Health Officer Dr. Thomas Dobbs says MSDH is pausing in its reporting of total tests performed because it does not accurately represent private testing totals, though Gov. Tate Reeves gave his estimation of state totals. Photo courtesy State of Mississippi

The Mississippi State Department of Health reported 89 new cases of COVID-19 across the state today, up to 847 from 758 yesterday. The agency also shared news of two new deaths from the virus. MSDH reports that 16 Mississippians have died from COVID-19 as the week begins.

The novel coronavirus has spread rapidly across the state, with virtually all of Mississippi’s 82 counties now reporting some degree of known infection. Tishomingo, Issaquena, Jefferson Davis, Jones, Greene, George and Stone County have no official detected cases thus far.

MSDH is no longer releasing information on the amount of testing done at its Public Health Lab, (UPDATE: Shortly after this story went live, MSDH again began publishing the number of total tests performed at the Public Health Lab.) suggesting that because of the volume of private tests being done, the previously stated totals were inaccurate measures of the total tests the state is performing. The state continues to release public and private detections of the virus. In a Sunday live stream on Facebook, State Health Officer Dr. Thomas Dobbs addressed the question of testing with Gov. Tate Reeves.

“We're working on that, getting all the data from the private labs, (specifically) negative results. And I think if you look at the volume of tests that we've done, I think that explains a lot of the case burden,” Dobbs said.

Reeves gave an update of the total testing he estimates the state of Mississippi has performed so far. “The health department's done close to 4,000. We think, probably, private labs have done about that many or more. We're about two-thirds of where that South Korea model is,” Reeves said, referring to the approach that South Korea took in slowing the spread of COVID-19.

South Korea’s population is 51 million, and Mississippi has a population of roughly 3 million. In recent weeks, Mississippi has pursued some, but not all of South Korea’s tactics for flattening the curve of the novel coronavirus pandemic. Mass testing, some performed at drive-thru testing sites deployed to hard-hit areas, is key to the strategy.

Comparing the two countries is difficult. South Korea’s strategy was put into effect rapidly, and with far greater force than any state in the U.S., using many methods of tracking and control that Dobbs described as “inappropriate” for Mississippi. But South Korea is also a densely packed nation, with roughly one-third of the entire population living in or immediately around the capital city of Seoul.

Dobbs said in the Sunday address that seeking and isolating “clusters,” rather than locking down the entire state, would be how the state flattens the curve. “Quarantining the whole state is obviously not sustainable, we can’t do that. But what we can do, if we can identify the individuals, and then the cluster of their close contacts, understanding who’s really at risk, instead of looking at the whole population, we can say ‘hey, you group of 10 folks, y’all are at high risk. We’re gonna have you guys go in quarantine for a couple weeks,’” Dobbs said, comparing the strategy to “pruning the bush, instead of burning the bush.”

In an opinion column for the Jackson Free Press, former Gov. Ray Mabus strongly disagreed with Mississippi’s current pandemic response. “If statewide orders aren’t put in effect, the state’s hospitals and health care workers will soon be overwhelmed. Many rural hospitals were already on the edge before this catastrophe. Mississippi does not have enough hospital beds, enough tests, enough protective gear, enough ventilators to meet this massive threat,” Mabus wrote.