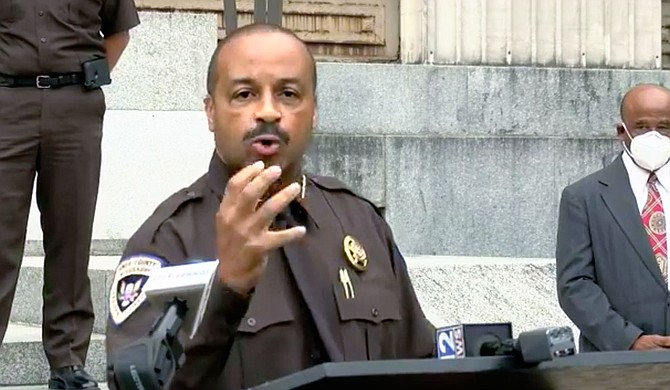 Hinds County leaders called for the Legislature to change the Mississippi flag. Sheriff Lee Vance saying it stands for “hate, torture, murder, rape, down through the history of this state." Photo courtesy WLBT screenshot

Hinds County leaders issued a passionate plea yesterday, joining the growing call to change the Mississippi flag because of the Confederate emblem in its canton.

Three members of Hinds County Board of Supervisor members told the press that the momentum is now for changing the flag, and seized the opportunity to correct a wrong of the past as they see it.

District 2 Supervisor David L. Archie said changing the flag would open the state up to more companies to bring their businesses here.

"Fortune 500 companies and others will no longer have excuses not to bring businesses to Mississippi because of our state flag," he said. "We want America to be proud of the changes that we are about to make here in this great state of Mississippi. It makes sense today to remove our current state flag."

District 3 Supervisor Credell Calhoun expressed regret that he has lived under the "rebel flag” throughout his 45 years in Mississippi.

"Ever since I have been here, it (the flag) has been beating this state down. I was fortunate enough to get elected to the Legislature 40 years ago, and I can say that we have tried the whole time I was in the Legislature to get this flag down," he added.

The flag is offensive to a large percentage of the population, he said.

Calhoun, who retired from the Legislature last year, had a message for his former legislative colleagues. "You have been telling me for years that you needed cover to vote for it (flag change); now you have the cover,” he said. “The time is right now. I can say that the people are with you. Go ahead and pass so we get rid of that flag right now."

Hinds County Sherrif Lee Vance said the current Mississippi flag stands for "hate, torture, murder, rape, down through the history of this state."

"I say to you; it is time to reject that flag with the Confederate symbol in it, he said. "Mississippi is the last state to reject that emblem inside our flag in the entire United States."

He predicted, like others, that the change will lead to more "economic development, more jobs, more respect, our state can turn a terrible, terrible, negative into a positive."

Vance commended the people across the state who have chosen not to put the flag up in front of their homes and businesses.

In a statement on its website, MEC said the presence of the "Confederate Battle Flag as a component of the 1894 flag is offensive to many, not representative of all Mississippians, and perpetuates negative stereotypes of our state."

It called the flag a global symbol of prejudice and hatred, regardless of those who sentimentalize it as being about "history and heritage."

"The current flag is harmful to Mississippi's image and reputation for those outside our state and is hurtful to many fellow Mississippians. MEC encourages state leaders to take action to change the flag," it added.