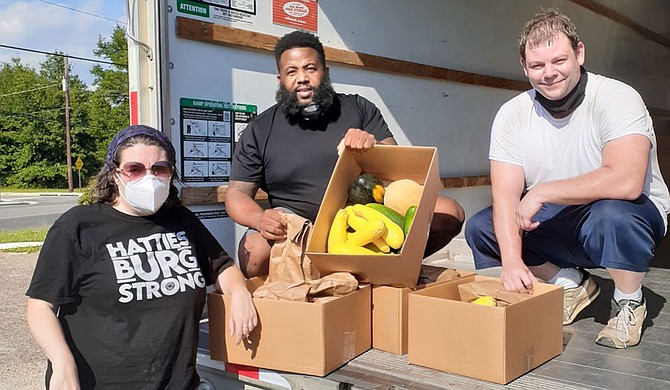 James Skinner, a Gulfport, Miss., native who is pursuing a master’s degree in library and information science and a graduate certificate in public history, is identifying food resources and distribution points across the southern half of the state to help get immediate relief to residents in need, as part of a Mississippi Gulf Coast Mutual Aid Network initiative.

The Mississippi Rising Coalition, a social justice organization for which Skinner serves as a board member, established the Mississippi Gulf Coast Mutual Aid Network in March 2020. Skinner and volunteers with the organization identify food resources and distribution points across southern Mississippi to provide relief to residents in need, a release from USM says.

MGCMAN partners with local faith-based and civic organizations as part of the relief efforts, including the Salvation Army of Hattiesburg, El Pueblo in Biloxi, Macedonia Baptist Church in Ocean Springs and the Jackson County NAACP.

Because the MGCMAN is a nonprofit organization, donations can also serve as a tax deduction for farmers, the release says.

Skinner, who is pursuing a master’s degree in library and information science and a graduate certificate in public history, is also leading an oral history project that involves interviewing volunteers and community organizers in Mississippi involved with the current social justice movement.

For information about volunteering with MGCMAN, call Skinner at 228-236-5323, email [email protected] or visit the organization’s website.

The Aydelott Foundation recently granted a $20,000 Aydelott Travel Award to Nada Abdel-Aziz, a Mississippi State University senior architecture student from Greenwood, Miss. Abdel-Aziz is the fifth recipient of the award from MSU since the award's establishment in 2016.

Abdel-Aziz plans to use the award to visit famous buildings in Sweden, Egypt, Italy and Japan, a release from MSU says. Her studies will include the work of architects such as Erik Gunner Asplund’s and Sigurd Lewerentz’s Woodland Cemetery in Stockholm, Sweden; Hassan Fathy’s New Gourna Village in Luxor, Egypt; Carlo Scarpa’s Castelvecchio Museum in Verona, Italy; and Tadao Ando’s Water Temple in Hyogo, Japan.

After her travels, Abdel-Aziz will work with her faculty advisor, MSU associate professor Hans Herrmann, to compile her research into a report to be judged against fellow Aydelott Travel Award recipients from other universities. One student will receive the Aydelott Prize and an additional $5,000.

Spraberry plans to study the Silodam by MVRDV in Amsterdam, the Netherlands; the Central Market Complex by Jože Plečnik in Ljubljana, Slovenia; and Niederhafen Promenade by Zaha Hadid Architects in Hamburg, Germany.

For more information about the Aydelott and Trussell Travel Awards, visit www.caad.msstate.edu/current-students/architecture/fellowships-awards.

Mississippi State University is partnering with community groups from Starkville and Oktibbeha County to host a press conference unveiling a partnership to seek solutions to racism and paths to racial reconciliation, a release from MSU says. The conference will take place on Friday, June 26, at 10 a.m. in downtown Starkville’s Unity Park.

The City of Starkville previously hosted a Starkville Stand Up unity march and rally from downtown Starkville to the MSU campus on June 6. MSU faculty, students, staff, coaches and student-athletes participated in the event, which the university hosted in the MSU Amphitheater.