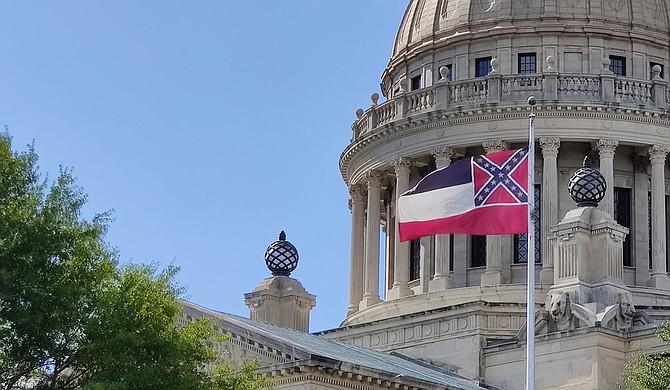 The Hinds County Democratic Executive Committee is calling upon Gov. Tate Reeves, Lieutenant Gov. Delbert Hosemann, and the Mississippi Legislature to immediately halt the use of white supremacist, Confederate symbolism on the official state flag. Photo by Nick Judin

Although numerous replacement designs have been proposed, the HCDEC believes that the most urgent order of business is for state leaders to bring down the current flag, allowing time to determine a unifying flag design which does not bear a blatant symbol of bigotry.

“A state’s flag is intended to unify the citizens and serve as a point of pride,” said Jacqueline Amos, Chair of the HCDEC. “The flag we have been burdened with since the close of the nineteenth century dates back to an era in which nearly half of today’s Mississippians would have been enslaved and treated as property rather than with the dignity afforded to citizens of the United States under the Constitution. The time has come—on this 155th commemoration of Juneteenth—to repeal and replace the flag of white supremacy, treason, and rebellion in our state.”

A new state constitution was adopted in 1890; it was the product of a white majority that wished to minimize the influence in state affairs of local blacks and of the federal government. As a symbol of the shift in power, in February 1894 the legislature adopted a new flag that was probably created by Senator E.N. Scudder.

Its three horizontal stripes recalled the Stars and Bars of the Confederacy, while the Confederate Battle Flag formed its canton.

Writing in 1863, Confederate sympathizer and Georgia newspaper editor William Tappan Thompson explained the significance of the flag, which is presently displayed prominently on the Mississippi flag: “As a national emblem, it is significant of our higher cause, the cause of a superior race, and a higher civilization contending against ignorance, infidelity, and barbarism.”

“We cannot even pretend to honor our state’s true heritage and begin working towards a better future for all Mississippians until the flag is taken down. This is our moment to unite all of Mississippi,” said Amos.