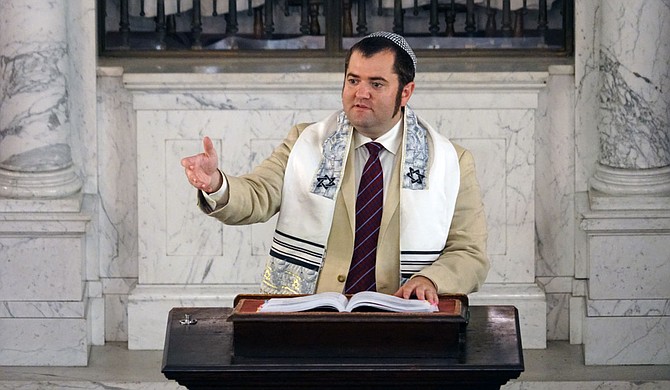 Rabbi Matt Dreffin has served as director of education for the Goldring/Woldenberg Institute of Southern Jewish Life in Jackson since 2018. He originally joined the institute in 2013 as assistant director and became associate director in 2015 before assuming his current position.

As director, Dreffin works with other nonprofit organizations, Jewish congregations and synagogue schools in 13 states to provide Jewish education curricula, community support and education-related conferences. He also supervises anywhere from eight to 10 education fellows coming out of college while they undergo two years of training at Goldring/Woldenberg, providing Jewish pre-professional training in various topics that relate to Jewish leadership.

"At the institute we work with anywhere from two to 500 students in a congregation and help non-professional (and professional) teachers be able to teach the curriculum with ease," Dreffin says. "We take care of calls asking things like how to adapt a curriculum based on the size of a classroom, go out on weekends to visit congregations in person and offer special programming for things like organizing events."

Born in Sarasota, Fla., Dreffin attended a catholic high school called Cardinal Mooney High School despite being Jewish after he and his brother had some negative experiences in public schools.

"Later, a friend told us that Catholic schools would be more respectful toward Jewish students, and we found that it was a better experience being at the Catholic school instead," Dreffin says.

Dreffin enrolled at Tulane University and received a Bachelor of Fine Arts degree in studio art with a concentration on hot glass sculpture in 2005. After graduating he took a job at a glass studio in Tampa, Fla., just before Hurricane Katrina hit the area and then briefly worked at a studio in New Orleans called Studio Inferno as the city was undergoing reconstruction after the storm. It was during that time that he decided to begin pursuing rabbinical studies.

"I had been pretty involved with my synagogue growing up, and part of why I had gone into art was that everyone said I should become a rabbi and I didn't like being told what to do," Dreffin says. "I had also liked doing stained glass work with my father as a kid, so the art scene appealed to me. However, when I was at Studio Inferno working on tchotchkes and trinkets for tourists after Katrina, I felt like I was just burning resources while watching the reemergence of New Orleans amid all the racial disparities around me. I decided then that it was time to go into rabbinical school."

Dreffin moved to Israel for his rabbinical studies in 2007 and remained there until 2008, when he moved to Los Angeles for the remainder of his studies until 2013. He moved to Fondren with his wife, Erica Weil, who is a nurse at the University of Mississippi Medical Center, later that year.

In addition to his work with the Goldring/Woldenberg Institute, Dreffin coached the Madison Central High School ultimate frisbee team from 2015 to 2018 and was a co-organizer for the Mississippi Disc Organization. He also worked as a secretary for the Mississippi Religious Leadership Conference, which has since closed, for three years and has been part of the Junior League of Jackson community advisory council since 2018.

Dreffin and his wife have been married for eight years and have two children, Riley and Sanford.