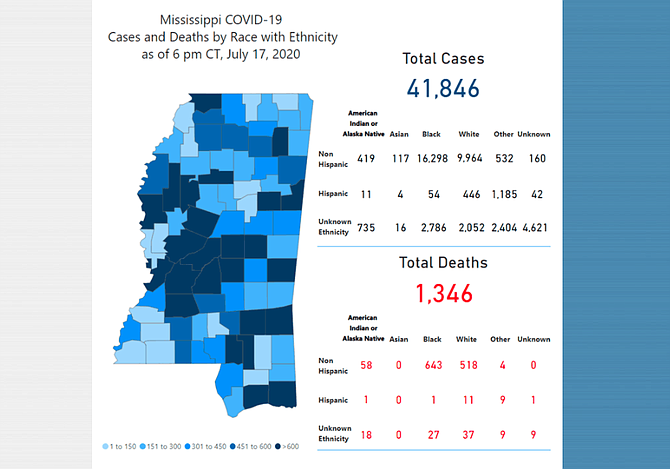 This week saw the highest number of daily positive cases reported along with the highest hospitalization numbers for COVID-19 sufferers since counting began.

In the past week, Mississippi has gone from a total of 35,419 reported people infected with COVID-19 to Friday's total of 41,846 people testing positive since counting began. That's 6,427 new cases in one week, or an average of 918 cases per day, by far the most reported in a given week since the pandemic began.

COVID-19 average daily infection rate is at its highest level yet in Mississippi.

COVID-19 infections remain deadly in Mississippi; 116 more people died from COVID-19 complications this past week, averaging 16.5 per day, which is slightly down from last week's average. Of the 41,846 people who have tested positive in the state, 1,346 have died, a mortality rate of 3%, which is under the U.S.'s overall 3.87% rate.

As of this story's publication, hospitalization numbers for Friday hadn't been reported. Thursday numbers had 1,076 people in Mississippi's hospitals with COVID-19 (853) or suspected COVID-19 (223) infections. 253 people with COVID-19 infections were in ICU beds, another high, and 129 people were on ventilators.

Governor Tate Reeves' "Safe At Home" order re-opening some non-essential businesses went into effect on April 27, 2020, making Mississippi one of the earlier states to re-open retail stores, bars and restaurants. On that day, 14,044 people had tested positive for COVID-19 and 670 had died from related illnesses. As the economy has been opened up, the number of deaths has doubled and the number of cases has tripled.

This past week, Governor Reeves issued more stringent face mask requirements for 13 counties in the state, including all three Metro Jackson counties of Hinds, Rankin and Madison. Dr. Thomas Dobbs, the chief medical officer for state, put a ban on elective surgeries this past Monday.

Mississippi is in a "red zone" as defined by the White House is a report that it also tired to suppress; as Nick Judin reported yesterday for the Jackson Free Press: "The guidelines for the red-zone areas are extremely clear: mask orders, closure of bars and gyms, and outdoor or takeout options for restaurants, to avoid the dangerous transmission presented by enclosed spaces, unmasked gatherings, and directed airflow."

Hinds, Rankin and Madison counties account for 6,603 total cases to date; all three appear on the "High Case" chart from Mississippi State Department of Health, but not the "High Incidence" chart, which shows counties with the highest per-capita number of cases.

Read the JFP’s coverage of COVID-19 at jacksonfreepress.com/covid19. Get more details on preventive measures here.