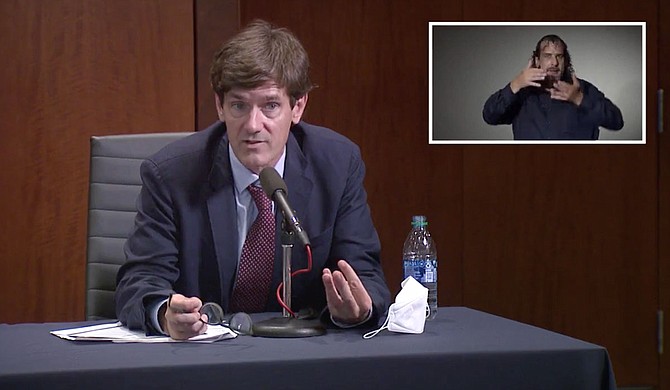 The July spread of COVID-19 across Mississippi is catastrophic and shows no signs of letting up, with new cases peaking as severe hospitalizations resulting from earlier spikes continue to rise. Thursday, the Mississippi State Department of Health announced 1,230 new cases of COVID-19, by far the highest single-day case count since the beginning of COVID-19.

July 16’s rolling seven-day total is 886, the highest ever, and reflects a statewide spread that the White House Coronavirus Task Force asserted in a July 14 report puts Mississippi in the “red zone” of highest risk for COVID-19, joining other areas of rapid infection like Florida and Arizona. 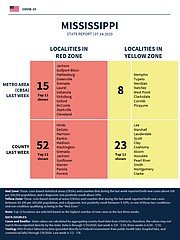 Mississippi is gauged to be in the red zone based on both number of new cases per capita (over 100 per 100,000 residents in the preceding week) and in test positivity rate (over 10% of all reported COVID-19 tests coming back positive.)

The White House itself suppressed the report, which The Center For Public Integrity later obtained. The report contains specific details about Mississippi’s dangerously high rate of COVID-19 transmission, as well as specific guidance for curbing the threat based on municipal and county areas of high cases.

Of Mississippi’s 82 counties, 52 are in the “red zone” of critical transmission, and 23 are in the “yellow zone” of heightened risk. The guidelines for the red-zone areas are extremely clear: mask orders, closure of bars and gyms, and outdoor or takeout options for restaurants, to avoid the dangerous transmission presented by enclosed spaces, unmasked gatherings, and directed airflow.

On Monday, July 13, Gov. Tate Reeves ordered 13 of the most heavily affected counties in the state under additional restrictions, indicating later in the week that he was strongly considering limitations on bars in the state. But the order, which reduces the size of public gatherings and mandates the use of masks, does not apply to 39 of the counties and some of the metropolitan areas the White House Task Force lists in the “red zone.”

As of press time, MSDH has yet to release today’s new numbers, although State Health Officer Dr. Thomas Dobbs did release the preliminary data on hospitalizations, showing the first day in a week that new hospitalizations have remained relatively flat. However, Dobbs’ data, posted on his Twitter account, reveals a continuing uptick in admissions to intensive-care units and ventilator usage. Previously, Dobbs estimated that Mississippi would see 85 new hospitalizations for every 500 reports of COVID.

Dobbs’ data reveal that, as of July 16, slightly under one-fifth of all hospitalized Mississippians have COVID-19, but over a third of all ICU patients statewide have been diagnosed with the disease.

Read the JFP’s coverage of COVID-19 at jacksonfreepress.com/covid19. Get more details on preventive measures here. Email state reporter Nick Judin at [email protected] and follow him on Twitter @nickjudin