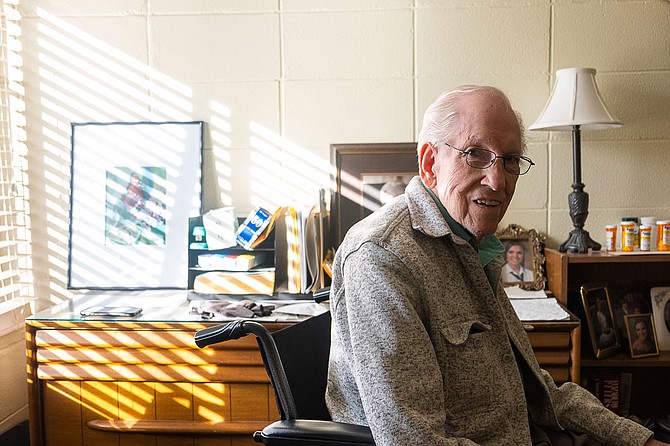 Rudolph "Cotton" Baronich, a longtime Jackson resident who once worked as a bartender at city landmarks like the Sun-N-Sand, George Street Grocery, Hal & Mal's and the Edison Walthall Hotel, died on Tuesday, June 30, at age 90.

Baronich's parents immigrated to the United States from the Adriatic coast in Croatia, and he was the fifth of the couple's eight sons. He moved to Jackson from his birthplace in Biloxi in 1970.

He first learned to cook while working at a now-closed Yugoslavian restaurant called Baricev’s in Biloxi and began working in the club business in 1955. Baronich took a job at the Sun-n-Sand, a famous motel in Jackson that state legislators and authors such as Willie Morris once frequented, in 1970. The Sun-N-Sand closed in 2001. In 2005, the Mississippi Heritage Trust put it on its "10 Most Endangered Historic Places" list.

Baronich met his late wife, Jean Shamberger, a ballerina who taught dancers in her own studio, in 1970 while he was bartending at the Sun-N-Sand. The couple married in 1971.

“He was the last of an era of professional mixologists and gentlemen, the old school service industry standard that rarely exists now,” Malcolm White, owner of Hal and Mal’s in downtown Jackson, said of Baronich. “He wore a tie to work every day and had a formal, gregarious approach to what he did. He was someone from another era and place, a remarkable conversationalist with a great memory and a great storyteller as well.”

Baronich first met White while working as a mixologist at George Street Grocery in Jackson—now the site of Ole Tavern on George Street—which White once owned and managed. He later worked as a mixologist for Hal and Mal's for roughly five years during the 1990s. In 2014, Baronich served as the grand marshal of the Mal's St. Paddy's Parade, which had the theme "Drink Local, Think Global" that year.

“I invited him to be our grand marshal after he retired because he was someone who knew everything about Mardi Gras, Irish parades and all kinds of other cultural celebrations, and he had a blast doing it,” White said. Wherever he worked or wherever he was, people always went there because they loved to be around him.”

Baronich will be buried next to his mother in Biloxi City Cemetery.