Activist: 'We Need to Flood the Polls as We Flooded the Streets to Protest' | Jackson Free Press | Jackson, MS

Activist: 'We Need to Flood the Polls as We Flooded the Streets to Protest' 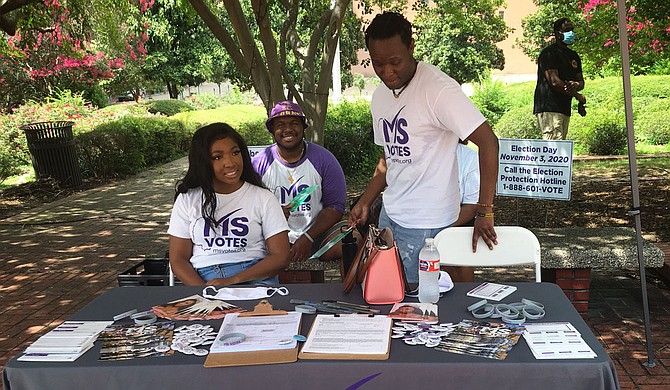 Members of Mississippi Votes set up a stand at a voter-registration event June 28 at Jackson City Hall. Photo by Kayode Crown

24-year-old Calyn Stringfellow, a native of Jackson, has the blood of activism running in her veins. She graduated in May 2020 from Jackson State University with a Bachelor's degree in Business administration, majoring in entrepreneurship. Feeling the urgent need to contribute to the civic life of her community, she wasted no time to launch herself into the fray of public engagement by organizing a voter-registration drive on June 28.

She wants more young people to get politically engaged and to register and turn out to vote, hence the program she held in front of Jackson City Hall. It was on the same day as the historic Mississippi flag vote just blocks north in the State Capitol.

Stringfellow told Jackson Free Press at the event that people need to know that if they do not vote, they will not be in reckoning in the political sphere.

"We need to make sure that we flood the polls as we were flooding the streets for protest," she said, referring to recent Black Lives Matter protests against police brutality that filled downtown streets with protesters. "To be honest, if we do not vote, no one will take us seriously. If we do not vote, then our voices won't be heard. We are going to register as many people to vote as we can."

She described the event, with dozens of people participating, as a rally for voter registration and community involvement.

She reminisced about the history of Black people in Mississippi, barred from participating in the voting process. Such Jim Crow laws are legally over now, but "today is the day we need to make sure that people are registered to vote before the deadline,” she said.

The deadline for Mississippi voter registration is 30 days before Election Day. For the coming Nov. 3 election, the deadline is October 4.

2 for 7 Kitchen provided free hot dogs and chips as music blared through speakers, creating a festive mood at the event.

"We are going to eat, we are going to enjoy ourselves, we are going to have a good time, and we will talk about why it is important to be active in our community,” she said. "There is enough room out here, enough trees, space. We can social distance, we have free masks, hand sanitizers that we are giving out."

The event was the first for Stringfellow, who said her grandmother, Mrs. Elizabeth Moore, inspires her as an activist with the National Association for the Advancement of Colored People between the 1960s and 1980s.

"I am a new-found activist, a natural-born leader, so I think now that with everything going on in the world, I just felt that this is something that was always in me, I have to bring it out. And this is the best time to do it," she said.

Later that day, in a telephone interview, she told the Jackson Free Press that the turnout was low, with about 20 people coming to register and some taking the forms with them to fill in the information.

The website americashealthrankings.org reports that 45.7percent of Mississippians ages 18-24 are registered to vote, which is 3.4 percent lower than the national average and the lowest among other age ranges for the state.