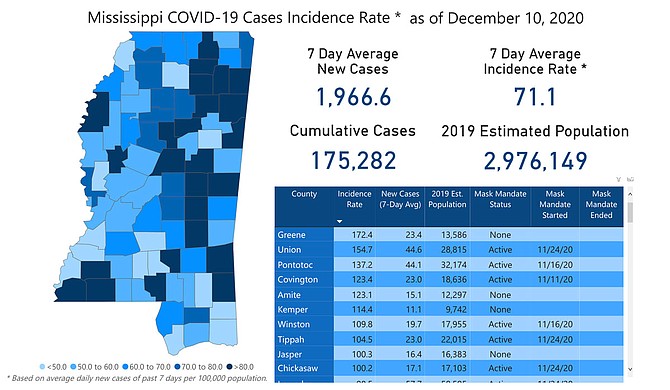 Gov. Tate Reeves warned of an intensifying COVID-19 crisis on Wednesday, signing a new executive order intended to reduce the social events and parties that the Mississippi State Department of Health warns is driving transmission. Then, hours later, he held a party at the governor’s mansion with revelers not distancing or wearing masks. Photo courtesy MSDH

With COVID-19 ravaging the state and its hospital system, even Gov. Tate Reeves is now acknowledging the severity of the crisis, signing the first new statewide executive order meant to arrest growth of the pandemic. While mask requirements are still limited to a county-by-county basis, stricter gathering limitations are now in effect for all of Mississippi—with no more than 10 people permitted at indoor gatherings and 50 at outdoor gatherings.

State Health Officer Dr. Thomas Dobbs laid out the number-one request for the people of Mississippi: an end to parties, especially those without distancing and masking. “Social events where people don’t wear masks are the things that are most worrisome for the transmission of coronavirus. We strongly support the use of masks in public settings whenever you’re out and about,” he said.

Yet, merely hours after signing the new restrictions and holding a press conference to plead with Mississippians to pitch in to protect the health-care system, the governor held a Christmas party at his mansion in downtown Jackson featuring close clusters of unmasked guests, undercutting the vital messaging of Mississippi’s own public-health agency.

The Daily Mail, a British tabloid, obtained pictures from Mississippi photojournalist Suzi Altman showing a tight-knit affair in the courtyard behind the governor’s mansion. The photos indicated that only the serving staff were social distancing and wearing masks, the key measures known to prevent viral transmission.

The photos, taken from the downtown Jackson streets surrounding the mansion, reveal how out of step many public officials in the state are with their own messaging. Also in attendance was Drew Snyder, executive director of the state’s Division of Medicaid, pictured unmasked and mingling close to other guests at the party.

The private conduct is a stark comparison to Snyder’s public support of public-health guidelines. Earlier in August, Snyder tweeted an image of himself masked at work. “We at @MSMedicaid mask up for you, Mississippi,” he wrote then.

In an interview with the Jackson Free Press, Altman said she could see roughly 20 guests, often gathered together, not including the servers and other staff working at the party. The attendees did not wear masks, but visibility prevented her from seeing if the party guests masked up inside, or congregated in numbers greater than 10 indoors. That would violate the Hinds County restrictions in effect long before today.

“He’d just spoken about how bad the numbers were, not to go to parties,” Altman said of the governor. “I thought it was important to record this.” She added that, in reviewing her photos, she could not find a single image in which anyone other than a staff member or security guard wore a mask.

‘Return to a Life That is Somewhat Normal’

The rank hypocrisy of the governor’s party, which violates the guidelines the Mississippi State Department of Health laid out in the document if not the governor’s legal restrictions themselves, is directly at odds with the governor’s defense of his decision to host the events.

“It allows us to really send a message to the people of Mississippi that you can return to a life that is somewhat normal—but you’ve got to do it in a way that minimizes risks,” Reeves said. 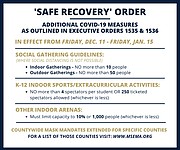 But having a party in which guests gather together in groups of well over a dozen, without masks or distancing, is actually maximizing risks—even if it’s done outside. The ventilation of the outdoors helps to prevent aerosol transmission, but droplet transmission, which MSDH and virtually every other major public-health institution have identified as the most common vector for infection, requires only unmasked proximity and time.

The gathering comes at a crucial time for the fight against the pandemic. Just today, MSDH announced 2,327 new cases of COVID-19, setting up yet another week of consistent, daily reports over the 2,000 mark, a degree of new infection inconceivable only weeks before today. The seven day average is now 1,967, and hospitalizations have crossed over into uncharted territory.

“Pressure on ICU's worse than summer surge. 26 hospitals on diversion for critically ill patients. Expect more efforts soon to enhance access to care,” Dobbs tweeted yesterday. Intensive care units, total hospitalizations and overall hospital utilization are at horrifying peaks all across Mississippi, with no support from medical facilities outside the state or the region.

Wearing Down Morale and Strength of Health Professionals

The unending struggle against the virus is wearing down the morale and the strength of the state’s health-care professionals. So too is the hypocrisy and denialism of the state’s political leadership.

Speaking at the press event hours before his party, Gov. Reeves asked the state to pitch in. “All of these measures are important,” he said. “And I hope that the people of Mississippi will make an honest effort to participate in helping to slow the spread. I truly believe that most Mississippians are doing just that.”

Most, but not all.