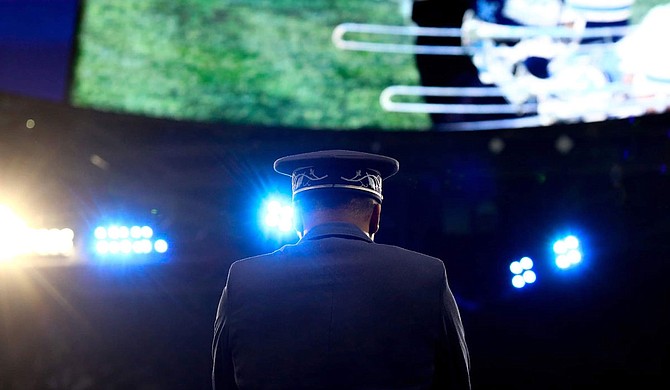 Due to COVID-19, Jackson State University’s famous band, the Sonic Boom of the South, will not march this fall. Photo courtesy JSU

Robert Little, Jackson State University's new director of bands since July 1, says music is something that dwells throughout his entire family. His father and brother both played the saxophone, and his sisters sang in choir and played violin. Little had his start in music playing the snare drum in sixth grade at Rowan Middle School, something he also says he has his musical family to thank for. 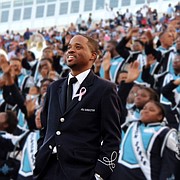 "My brother, Joe Little, had been a member of the school band the year before then, and he did so well that the band director at the time, Dexter Green, figured I would be a natural as well and let me be in the band even though sixth graders weren't usually put in the band at the time," Little says. "I ended up gaining a deep affinity for playing, and by high school when I started playing with other drum major students, I already knew I wanted to become a band director someday."

Little was born and grew up in Jackson and has been living in Florence since 2011. He graduated from Lanier High School and went on to JSU, where he received a bachelor's degree in music education in 2007 and a master's degree in the same subject in 2010.

After graduating with his master's, he stayed on at Lanier High School as both a band instructor and the school's band director until 2012, when he went to work for JSU. Before taking his current position earlier this year, Little had previously served as the university's associate band director since 2012 and as the marching band director for the Sonic Boom of the South since 2016.

He later pursued and earned a doctorate in urban higher education administration from JSU in 2019.

"When I obtained my employment at JSU in 2012, it was my first time working on the collegiate level. Upon arrival, I began to realize that higher education is very elaborate with many layers, which sparked my interest for further study in that area," Little says. "My research interest is music education in urban areas. Since we train teachers on this level to go out in the field of music education, marrying both my background in music education and my new knowledge of higher education together has been a benefit to frame my research."

As director of bands, Little is primarily responsible for the administration aspects of JSU's band program, such as the budget and daily operations of the university's various ensembles.

Due to the ongoing COVID-19 pandemic closing campuses and causing the Southwestern Athletic Conference to postpone all games until the 2021 spring semester, Little is currently directing JSU's band program to focus on online remote activities. Band students can log onto an interface called Campus, which JSU established in 2016, to practice pedagogical music exercises, which improve skills such as tone development, dexterity, technique, articulation and sight-reading.

"We've had Campus for some time now, but it's become especially handy since the pandemic started," Little says.

"Aerosols that come out of instruments (that players blow into) while playing make it too dangerous for the band to gather to perform as an ensemble, but Campus is a light in the tunnel letting them stay active in the meantime. ... It's important to us to work with the students remotely to help them keep up with their exercises specific to their instruments and keep them growing as musicians."

Little is also working to build JSU's online presence to keep fans engaged in the meantime, including posting more news about the program and working on an online chronicle of the history of the university's band program, which has existed since the 1940s. Another future plan is to construct a new band facility for the Sonic Boom, as the band has outgrown its current one, Little says.

"From a program standpoint, we've had to think outside the box during the pandemic. Instead of letting things be at a standstill, we want to improve the program as much as we can and focus on fundraising for things such as student scholarships, new uniforms, instruments and concert ensemble support," Little says. "It's important to us that the band program remains student-centered to keep them academically sound and graduating while still improving on showmanship, musicianship and national exposure for the band."

Little and his wife, Lynise, have been married since 2009 and have two sons, Aiden and Alec.

To learn more about JSU's Department of Music, visit jsums.edu/music. For more on the Sonic Boom of the South, you can visit sonicboomofthesouth.com.