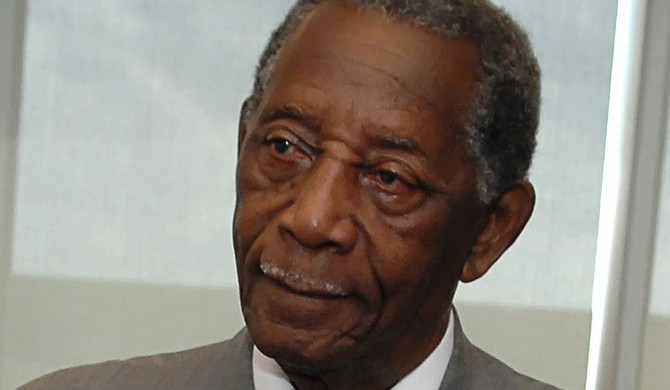 The Hinds County Board of Supervisors yesterday presented the family of Charles Evers with a resolution recognizing the impact of his life and accomplishments. U.S. Navy photo by Mass Communication Specialist 2nd Class Kevin S. O'Brien/Released

A refrigerated truck with the capacity to hold 40 deceased bodies will arrive in Hinds County by Friday, Board of Supervisors President Robert Graham told his colleagues at their meeting yesterday.

Graham said the truck, offered by Mississippi Commissioner for Public Safety Sean Tindell, is the immediate solution for the pressure the county coroner’s office faces because of the state crime lab's reduced speed of work to collect bodies.

"We have been working with the commissioner of public safety, who said that by Friday this week, we will have a refrigerated truck ready to be used that will have the capacity of holding up to 40 deceased, and they are in the process of getting a ramp built to accommodate it," Graham said. "This is not a unique problem with Hinds County; there are several counties that have the same situation as it related to the autopsy situation and the problem with the state crime lab."

"They look to have a solution by as early Friday, maybe Thursday if they get the ramp built," Graham said. "I have been working with Hinds County Coroner Grisham-Stewart; she has a situation that she needs as much help as she can possibly get. As of this past week, she is holding several bodies due to the fact that the state crime lab is backed up. As of Friday, she was holding 10. She has no place to store the bodies."

He said that the coroner is considering cremation.

"She is considering the possibility, at some point, unless the situation is taken care of and her load is reduced, the possibility of cremation," he said. "There is a statue that does allow the board of supervisors to (approve) that."

Charles Evers was an example of positive activism and an American treasure, Hinds County Board of Supervisors said in a statement about him at its meeting yesterday.

Evers passed away at age 97 on July 22, and the Jackson City Council held a session in his honor on July 24.

"(We) recognize the strength and character of individuals who demonstrate passion and purpose through their commitment to advance the lives of others in the community, collectively and individually,” the resolution said in part. “Acknowledgment of the extraordinary accomplishment and influences of individuals such as James Charles Evers is a historical accounting of true sacrifice, and encourages the development of positive activism, and the support of equal rights within our community."

Evers’ numerous achievements highlighted in the statement include being the first Black disc jockey in Mississippi, his entrepreneurial acumen, his 16 years as mayor of Fayette, Miss., and becoming a noted radio personality with widespread influence.

"In 1951, his and his younger brother Medgar were passionate about civil rights and became involved in various movements that promoted self-help, business leadership and voting rights within the African American community," the eulogy continued.

In a comment about his political pedigree, the statement showed that Evers had supported presidents of both major political parties: "He was a friend and informal adviser to Presidents Kennedy, Johnson, Nixon, Reagan, Bush and Trump."

Hinds County now has extra judges to assist in clearing the backlog of cases due to COVID-19, District 2 County Court Judge Larita Cooper-Stokes told the board of supervisors yesterday.

The COVID-19 break led to delay in court hearings, and Mississippi Supreme Court Chief Justice Mike Randolph has assisted with additional judges to help with the workload.

"(Earlier in) the COVID-19 crisis, we (took) a break, and the court did not meet for several weeks. As a result of that, there was a backlog created," she said. "We were contacted by the Supreme Court justice, and he said that he would provide us with some assistance in working on the backlog, and he has done that."

Each Hinds County Court judge received an assisting judge, funded from the COVID-19 relief fund from the federal government.

"I handle the civil matters, Justice (Johnnie) McDaniels handles criminal matters, and Judge (Carlyn McGee) Hicks is over the youth court, so each judge has a judge assigned to work with us temporarily, and the assignment is to the end of this year," she said. "I spoke with the chief justice on Friday. He (stated) that the COVID-19 fund, which has been provided to him through the federal government, that those (will fund) any cost involved in the temporary judges being assigned."